A sleepy, but pleasantly surprising action-adventure, "Ragnarok" is the rare Spielberg clone that feels like it was made by people that not only know what they like about Spielberg's films, but are capable of evoking them. Sigurd (Pal Sverre Hagen), a head-in-the-clouds archaeologist that gets terrorized by a giant snake monster while looking for Viking artifacts, is a cross between Indiana Jones and Dr. Alan Grant. Which is to say: he's a benignly egocentric single dad that realizes by the film's end that knowledge should be shared, not monetized, and women and children aren't accessories. Sigurd's quest grants him genuine perspective, and makes him realize that he's not that different from his miserly boss, head-strong subjects, or serpentine tormentor. These revelations modestly unfold at their own leisurely pace, and are supplemented by some modestly impressive brick-and-mortar action filmmaking, particularly good use of slow-motion photography, and an exciting zipline set piece. "Ragnarok" could stand to be a little less timid, but it also handily proves that you don't need to be bombastic to be exciting.

"Ragnarok" begins with a weary, perfunctory preface: in the 9th century, a bunch of fool-hardy Vikings set out to test their mettle. They wind up getting attacked by a giant snake. The snake doesn't really get to mess anybody up, and the Vikings are only shown skulking around for a bit. Which sucks, since this placeholder intro is supposed to hold viewers over for an hour, when we get the film's first major action scene. Then again, that shortcoming isn't such a bad thing when you consider how effectively the film's characters and concerns are established an hour in. It's easy to forgive "Ragnarok"'s creators for what they overlooked given the little, personal touches thrown in.

When we first meet Sigurd, a widower with two kids, he only has eyes for his job. He's obsessed with some recently uncovered runes, but the money-men that pay for his research aren't impressed with his passion and theoretical knowledge. So Sigurd teams up with fellow archaeologist Allan (Nicolai Cleve Broch) and research assistant Elisabeth (Sofia Helin), and drags his kids to Finmark, the Northern-most part of Denmark, in search of grant-worthy booty.

Here's where "Ragnarok" proves that its creators get how crucial characterization is to the success of Spielberg fantasies like "Jurassic Park" and "Close Encounters of the Third Kind." Neither Sigurd nor Elisabeth need to go through the ringer to prove that they're scatterbrained problem-solvers that can also empathize enough to care for children. It's not an either/or deal. Elisabeth puts a fine point on that notion when she smiles and tells Sigurd's daughter Ragnhild (Maria Annette Tandero Berglyd) that "Family is not really my thing." Then she smiles warmly after Ragnhild tells her of her mother's passing, and spreads bug spray on the girl's face. It's a touching, small moment that rings true thanks to Berglyd and Helin's apparent chemistry.

It also goes a long way towards revealing the film's unsentimental priorities, particularly the film's adoration for Sigurd, and his habit of figuring out his priorities as he messes them up. Sigurd's usually too enamored with his research to see beyond himself, but viewers can tell where his heart is in a slow-motion sequence where he pulls son Brage (Julian Podolski) away from danger. Svendsen's stare shows that he's both angry and terrified. His bulging eyes are blocked just right, drawing attention away from his mouth. It's a really good, finely observed moment that could have easily been forgettable, and by-the-numbers. You can also see why "Ragnarok" roots for Sigurd in the scene where Svendsen emerges from a dark tunnel armed only with a snake egg and a torch. Svendsen's too wiry and unkempt to be a Scandinavian Indiana Jones, but he looks almost as heroic. It's a beautiful, front-lit shot that draws out the shimmering inky darkness at the actor's back. The camera doesn't linger on Svendsen, but that image stays with you.

By now, even I'm convinced I'm talking "Ragnarok" up too much. It is a fun genre film with subtle power that really captures the imagination, though you've seen this story many times before, and have heard it told in far better ways. It's rote in some ways, and takes too damn long to get to some really good stuff, but when I set out to write this review, I found myself immediately drawn to its best bits. The film's highs really do make the lows seem insignificant. I hope more people check out "Ragnarok" for that reason alone. 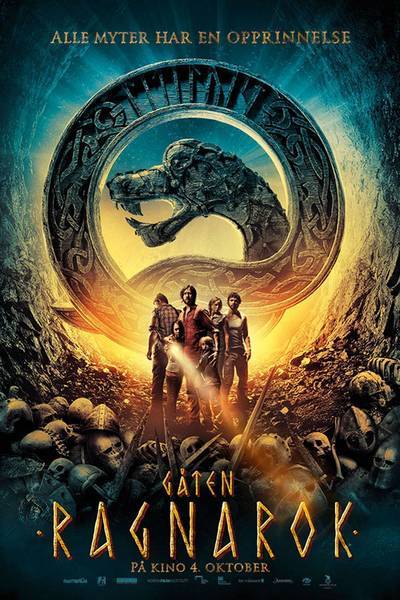 Rated PG-13 for some terror/frightening images