“Seventy percent of the critics have hated my movie,” Joan Rivers explained to me. “The other 30 percent were geniuses, knew their work and were sensually attractive.”

So there you are. I'm dumb, lazy and sensually unattractive, and “Rabbit Test” is not a funny movie. It really isn't. It's jammed from wall to wall with eccentric characters and throwaway one-liners and would-be funny signs (“The Christian Science Memorial Hospital”), but it's just not funny. And I know it's not, because I would have laughed if it had been.

Instead, I sat in the midst of an audience that broke its silence only to yawn, take orders for popcorn, and (in the case of audience members under five) break into tears. It was a pretty big audience, maybe because the publicity campaign for “Rabbit Test” was as good as the movie is bad. Everybody knows by now, I suppose, that the movie's about the world's first pregnant man. Everybody will soon find out that the movie is not funny about the world's first pregnant man.

But it tries. Not a moment goes by without something on the screen that's supposed to be funny. That's what makes the movie quietly amazing: That so many different gags could not be funny. Example: Paul Lynde plays the gynecologist who tells Billy Crystal that he's pregnant. That'll make him so famous, Lynde explains, that he'll get to appear on the Tonight Show. “And not with a guest host!” Lynde exclaims. Lynde and Rivers have both been guest hosts on the Tonight Show. Ho, ho.

The movie has a strange look and sound to it. The sound is curiously flat, as if everyone were speaking from beneath a bushel basket, and the dialog all seems sort of disheartened, as if the actors knew it wasn't funny. Even the loud and excited dialog is disheartened: People pretending to shout.

And the photography is so routine that I had to look at the credits twice to convince myself that the movie was shot by the great Lucien (“The Wild Bunch”) Ballard. Ballard and Rivers point their camera at things and let them happen, and then occasionally they burst into close-ups that are so arbitrary they seem like changes of pace, not cinema. Before anything else, movie comedy has to feel funny; we should sense from the screen that the filmmakers themselves are laughing. We don't this time.

“Rabbit Test” is flat and mechanical, filled with funny ideas for a movie, but not with funny things in a movie. Another example: Roddy McDowall in drag as an ancient grandmother. That must have seemed like a howl when they suggested it to Roddy, but all you see in the movie is a grandmother who's supposed to be funny because she's Roddy McDowall. McDowall was funnier as an ape.

There are, no doubt, funny things to be done with a situation in which a man finds himself pregnant. The movie does few of them, because the pregnancy, like everything else, is used only for the most obvious laughs. Situations aren't explored, characters aren't developed, timing is ignored, but every 30 seconds there's a would-be laugh. Because all we're supposed to do is laugh, the movie is deadening. 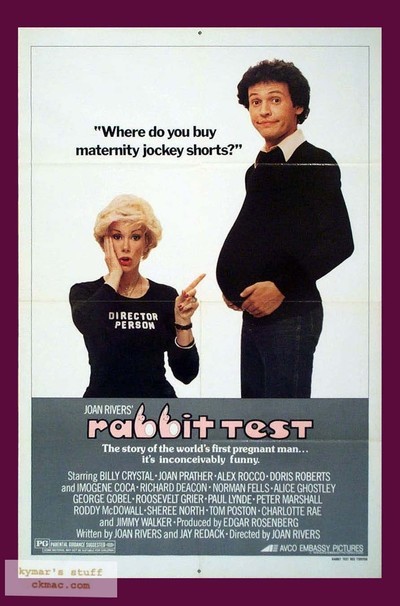