The job of the character actor is multifold. He must be reliable and versatile, and he must add texture and reality to a film just by showing up. The movie stars couldn't shine as brightly without the character actors around them. For decades now, Luis Guzmán has been one of the best character actors in the business. Films are made better merely because he is in them (and you can't say that about many A-List headliners). Like all good character actors, his talent is not limited or narrow. He can be serious or funny. He can play smart or dumb. He's a tremendous listener: his reaction shots often help entire scenes land. Think of what "Punch Drunk Love" (just one example) would have been without him in it. Impossible. So a huge part of the pleasure of a film like director Ian Edelman's "Puerto Ricans in Paris" is that Guzmán is one of the leads, which means he appears in every scene, as opposed to just a few. He can convey more in a sideways glance than most actors can convey with their whole bodies.

"Puerto Ricans in Paris" (co-written by Edelman and Neel Shah) has a classic culture-clash set-up. Eddie (Eddie Garcia) and Luis (Guzmán) are brothers-in-law who also have successful NYPD detective careers busting up counterfeit fashion rings running out of storefronts on Canal Street. Their work has gotten the attention of French bag designer Colette (Alice Taglioni), who flies to New York, in all her short-skirted, huge-sunglasses French gorgeousness, to ask them personally to help her track down a stolen prototype of one of her bags. The two guys leap at the chance, not just because of the reward money offered to them, but also as an escape from their two very different sets of woman problems: Eddie and Gloria (Rosie Perez, another essential character actor) have been together since they were teenagers, have a bunch of kids, and their relationship is a mixture of boredom and irritation; Luis has been dating Vanessa (Rosario Dawson, very funny in her small role) for a while, but refuses to pop the question. She's furious. Paris represents not only an escape from all of this but a lucrative validation of their competence as detectives.

Surprisingly, and refreshingly, the "culture clash" aspect of "Puerto Ricans in Paris" is not the driving engine of the plot or the source of the film's energy and humor. Yes, it's funny when Guzmán, in his loud Hawaiian shirt, swaggers up to a snooty French woman on the sidewalk and asks to bum a cigarette, calling her "mami" in the process. There are many such scenes, and they're all funny, but Edelman doesn't milk the situation for all it's worth, as might be expected. Instead, he focuses on the case the guys have been hired to solve and the Byzantine Venn-diagram of suspects, but mostly on their dynamics as a duo and their interactions with other characters. Garcia and Guzmán, who both had roles on Edelman's HBO series "How to Make It in America" have the easy chemistry of guys who have known each other forever.

Eddie and Luis find themselves immersed in Colette's world as she drags them around to parties and nightclubs. She and Eddie form a surprising and sudden bond that has more to do with the struggles of being a parent than anything sexual or romantic. It appears to be a real friendship and Luis looks on with suspicion. Luis strikes out with every French girl he approaches, and cannot understand why Colette seems to prefer Eddie over him. There's a very funny sequence where Eddie is a huge hit at a dinner party, and poor Luis can't get a full sentence out before someone interrupts him. Meanwhile, during the day, Eddie and Luis go undercover as Saudi sheikhs, or international drug dealers, to investigate the different suspects. It is completely ridiculous and completely entertaining.

While there are obligatory shots of the Eiffel Tower and the Arc de Triomphe, Edelman does not shoot Paris as a travel brochure. The guys are out and about in the streets, riding bikes, walking to the local cafe, hanging out on balconies at after-hours parties. Paris provides a backdrop just as New York does. Sure, the guys think Paris is beautiful. Eddie falls in love with the taste of macarons. Luis plans to steal all of the fancy soaps in the shower. But the story is deeper than the title may suggest, and funnier. There's even a fashion montage, when Colette's flamboyantly gay assistant comes over with outfits for them to wear to a dinner party. If you've always wanted to see Guzmán do a fashion montage, "Puerto Ricans in Paris" provides.

"Puerto Ricans in Paris," stolen bag aside, is really about two guys who know each other really well, who have woman-problems, and who figure out some important stuff about their lives while racing around Paris dressed up as sheikhs. It's charming. It's funny. The case they investigate has a legitimate twist to it, there's a lot of French intrigue, there's much that is totally implausible, but the film lives or dies on the dynamic of the two main guys. It lives. 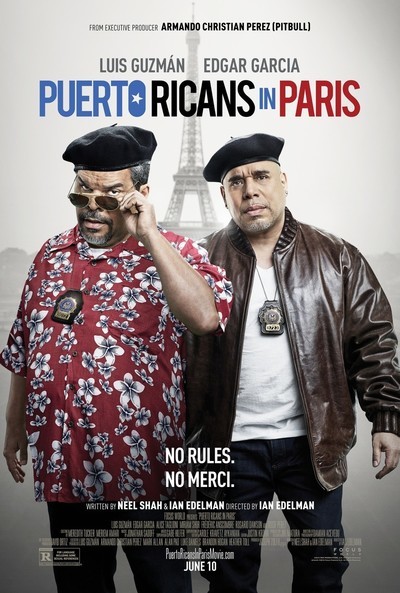