Zack Parker’s "Proxy" opens with a scene so inherently shocking that it required a special warning in the program when the film played at the Toronto Film Festival for its "deeply disturbing content." A quiet woman named Esther (Alexia Rasmussen) is walking home from her final ultrasound before giving birth. She’s very pregnant, close to nine months. With no warning, a hooded attacker knocks her unconscious and pounds her stomach with a brick, killing the baby. It is the kind of stomach-churning scene that sends those who just casually see whatever is playing at their local arthouse that weekend fleeing for the door. (Trust me, I used to work at such a theater and you would be amazed at the number of people who just see whatever is playing.)

And yet, while seasoned filmgoers expect what follows to be a procedural investigation or motive-detailing explanation of such a horrific event, Parker takes his film somewhere else entirely. With the blunt force and social context of creators like Chuck Palahniuk (known in cinematic circles for "Fight Club" and "Choke," but this piece is closer to his fiction like "Survivor" or the stories of "Haunted") and Lucky McKee ("May", "The Woman"), Parker has made a tough, brutal, and often riveting thriller.

At first, it seems like Esther is understandably unmoored by the murder of her unborn baby and that "Proxy" will be a dramatic piece about unimaginable grief. She stares off into space, rides the bus to the hospital in the middle of the night, and seems to have no human connection at all. Then she meets Melanie (a truly great turn from Alexa Havins), a kind soul at a local support group. Melanie and Esther become quick friends, maybe even more, but there’s something as "off" about Melanie as there is in our heroine. Parker maintains an uneasy, unsettling tone even in this first act in the way that he crafts long, almost intentionally clunky scenes of dialogue between his protagonists that ooze with the tension of audience expectation. We’ve seen a pregnant woman attacked. What’s next? And the flat, disaffected mannerisms of his stars add to the tension. Something is clearly wrong with Esther. Something is clearly wrong with Melanie. Parker plays with our anticipation for these character reveals brilliantly.

And then he drops the floor out from under us. More than once. To give away where "Proxy" goes would be to spoil the unsettling appeal of a film that continuously foreshadows awful events to come but still somehow ends up in unexpected places. Two significant others enter the picture in the form of Esther’s girlfriend Anika (Kristina Klebe) and Melanie’s husband Patrick (filmmaker Joe Swanberg). Minor roles are filled out by performers who seem intentionally inexperienced, adding to the unease throughout the entire, admittedly long film. The amateurish aspects of the production don’t detract from it as much as give it an eerie, lived-in quality that makes it harder to shake, not unlike some of the early works of David Cronenberg, another filmmaker who loved to plumb the horrific depths of everyday life. Parker writes very casual dialogue and doesn’t fussily edit his film, allowing the horror to arise from or shatter the mundane. He can sometimes take a beat or two too long and there’s a probably tighter version of "Proxy" that’s about 20 minutes shorter, but Parker still finds ways to sustain the unease.

There’s a whole branch of thriller/horror literature and film that works to keep those engaged with it guessing as to where it’s going, but most of it seems random or haphazard in its structure. "Proxy" never does. It’s a film that opens with the death of a baby and yet that isn’t really even what it ends up being about (even if everything that follows wouldn’t without that incident). It’s a film that I kept trying to get ahead of—THIS is what it’s "about," where it’s going, what the title means, etc.—but Parker kept going left when I expected him to go right. It’s a daring, confident, absolutely brutal film that takes no prisoners. It’s the kind of film that will likely be loathsome to those morally unwilling to not only accept its descent into darkness but also accept that the darkness that makes it so riveting is based on human need. 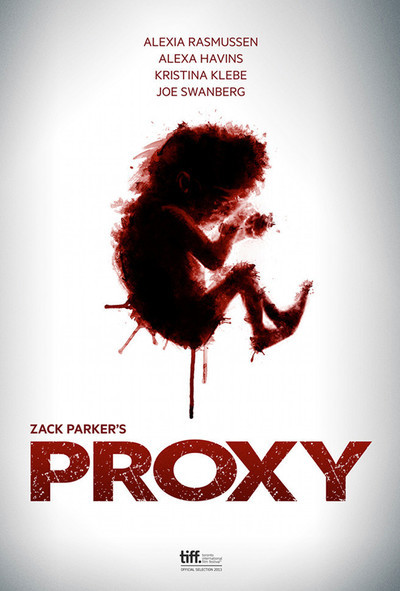