Robert Greene is officially the director of "Procession," a hybrid of nonfiction and drama in which a group of now-grown survivors of childhood sexual abuse by priests join in a collaborative filmmaking experiment, hoping to find catharsis and closure. But the movie gives the standard "a film by" credit to everyone who participated in the creative process onscreen, and it's a testament to the sincerity of all involved that it feels like the right thing to do.

Greene decided to make this film after witnessing a televised 2018 press conference in which three middle-aged Kansas City-area survivors of sexual abuse by priests stated their intention to name 230 priests in the area who had participated in an organized child sex trafficking ring operating under the protection of the Catholic Church, which had a long record (not just in Kansas City) of enabling, ignoring, or barely disciplining abusers on their payroll. Greene contacted the men's lawyer, Rebecca Randles, and hooked them up with Monica Phinne, a "drama therapist" who teaches trauma survivors how to use theater to transform feelings of victimization into empowerment. "Procession" is a record of the process and includes snippets of filmed scenes created by the survivors, who often appeared on camera in one another's stories.

Documentary aficionados will be reminded of Joshua Oppenheimer's "The Act of Killing," which gave participants in Indonesian genocide the chance to make short films about themselves in hopes of better understanding the psychology of mass murderers. Greene is on ethically firmer ground here by virtue of having given such an opportunity to the victims of crimes rather than the perpetrators. But as "Procession" unfolds, you think less about the moral and aesthetic issues involved (which are never far from Greene's mind) than the transformative effect that the storytelling process has on those taking part in it.

There's Mike Foreman, a deep-voiced, casually profane man whose own mother returned him to the home of the priest who molested him and made him deliver a cake, and who now radiates barely-suppressed fury and listens to The Who's "Behind Blue Eyes" obsessively. There's Dan Laurine, a soft-spoken TV and film locations manager with a long grey beard who was raped by two priests during an unsupervised trip to a lake house. There's the witty and down-to-earth New York-based contractor Ed Gavagan, who announces early on that this won't be the sort of film where tales of violation are rewarded with a "golf clap." There's Joe Eldred, who suffers dissociative episodes, and wishes he could speak to his younger self. There's Tom Viviano, who says he can't speak directly about what happened to him due to an ongoing legal action against the church, but is happy to do whatever the others ask of him, even don the robes and collar and play the role of a child rapist. And there's interior designer Michael Sandridge, who remains devoted to his faith and the church despite his victimization, and often comes across as Greene's on-camera avatar, thoughtfully steering the others towards better realizing their visions.

What all these men have in common is a shattered-and-pieced-together quality. Most of them can barely broach the subject of what happened to them without starting to sob and then suddenly and awkwardly recovering their composure and carrying on in what society told them is a manly fashion. The construction of masculinity, and the code of silence that is so often woven into it, comes in for critique here, though always obliquely, emerging organically from the stories the survivors tell and the art they try to make from it.

This is an unrelentingly gripping and often disturbing film that dares to visualize (with taste and restraint) some of the vilest behavior our species is capable of, and take full measure of the psychic damage it inflicts on innocent victims. But it's not a wallow in pain, because the survivors control of every part of the exercise and lean on each other for support and inspiration throughout.

And even though perhaps a third of "Procession" consists of re-creations, and the rest is about the artistic, logistical, and psychological prep work required to get the survivors in the right headspace to work their magic, you never feel as if the movie is trying to fool you into thinking that drama is fact. It's transparent about what it's doing (more of a record of what happened during a filmmaking workshop than a traditional biographical doc) and there's never any danger that the audience will lose its bearings. Greene, who also edited the movie, constantly shows the lights and scrims and boom microphones and other signifiers of artificiality or dramatization, and keeps cross-cutting between re-creations of scenes. The survivors direct, perform, or assist in their creation, the better to illustrate what's happening to these men emotionally as they try to use art to reclaim their worst experiences and enjoy the rest of their lives.

"Procession" is the culmination of Greene's boundary-blurring features, which include "Bisbee '17," "Actress," "Kate Plays Christine," and the one with the title that kinda sums it all up: the 2011 wrestling documentary "Fake It So Real." "Actress," which followed "The Wire" actress Brandy Burre as she tried to re-enter the business after briefly leaving it to raise a family, was filled with what Greene called “composed indie-film moments" that were supposed to have a "poetic" function, getting at a deeper and more elusive truth without confusing the audience into thinking they were seeing something that spontaneously happened. "Procession" has more such moments and images than can be recounted here, some seemingly picked out by Greene and his crew on-the-fly (such as Mike contorting and bouncing on a basement rec-room couch to "Behind Blue Eyes") and others devised by the survivors, who draw in such diverse influences as the supernatural horror film, the theatrical psychodrama, and Bob Fosse's autobiographical musical-fantasia "All That Jazz." (A re-enactment of the moment right before a violation occurred in a priest's bedroom is filmed on a stylized stage set where the props, furniture, walls and floor have been spray-painted heavenly white; it's reminiscent of the purgatorial interview scenes in Fosse's movie where the hero justifies himself to the Angel of Death.)

Greene's approach conjures up a lot of secondary resonances and notions along the way, including the extent to which all identity is constructed and then performed, and the eerie way in which life keeps serving up symbols and metaphors that we might criticize for being too on-the-nose if we encountered them in fiction (such as Laurine's fixation on an accidentally broken fishing rod given to him by one of the priests who raped him in the lake house). But it is to Greene's great credit that these never overwhelm the main point of the project, which is to heal and make whole six men who were betrayed by an institution that was supposed to be a force for good in their lives. Greene does not treat them as passive objects to be pitied, but empowers them through art.

In limited theatrical release today and premiering on Netflix on November 19th. 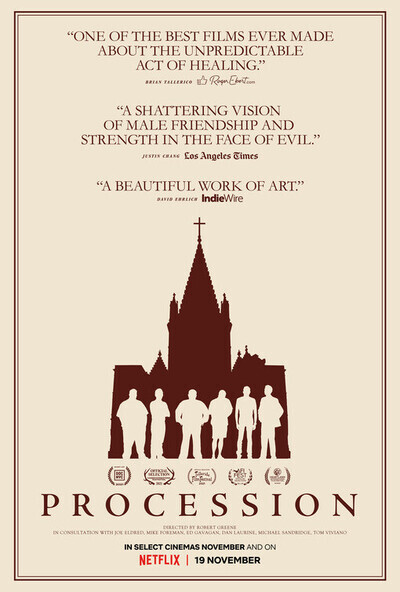