There’s Brandy Burre and there’s “Brandy Burre,” a distinction that becomes increasingly muddled throughout the course of the documentary “Actress.”

Actually, even calling “Actress” a documentary doesn’t feel entirely accurate. Certainly, director Robert Greene documents moments in the life of Burre, a mother of two who gave up her acting career and moved to the scenic Hudson River town of Beacon, New York, 70 miles north of Manhattan. They range from mundane (the daily hassles of getting her young son and daughter dressed and out the door in the morning) to monumental shifts (the disintegration of her longtime relationship with the children’s father, restaurateur Tim Reinke).

But complicating matters is the aesthetic Greene has chosen in following Burre as her restless spirit takes hold and inspires her to re-enter the industry. (As Burre’s next-door neighbor and friend, he’s had a front-row seat for the many changes that occurred in her life as she approached 40.) He alternates between intimate, unadorned domestic glimpses (Burre drinking red wine alone in sweats and a sloppy ponytail) and artful interludes in rich color and exquisite slow motion (water gushing from the kitchen faucet onto a sponge as she scrubs dishes).

He’s toying with us constantly—and with our perception of what is authentic—in ways that are both intriguing and frustrating. Burre is too; she seems to relish trying on the role of the bored, apron-ed housewife who’s straight out of a Douglas Sirk melodrama, but she can also be very direct, pragmatic and of-the-moment, as in her meticulous labeling of the kids’ toy bins. With her long, dark hair, deep-set eyes and strong cheekbones, she has an inherently dramatic presence about her. But she also talks to her kids like they’re little people rather than babies (including dropping an F-bomb in front of her then-3-year-old girl) and finds herself saying the sort of ridiculous things all mothers do. (“Eat the cereal. The cereal will heal your brain,” she tells her daughter who’s complaining of a headache.)

Being a performer, Burre is constantly aware that she’s on camera and of the potential power that carries—even more so than the average person, perhaps. Sitting on a beanbag chair in the kids’ play room, surrounded by stacks of board games and other sundry toys, she looks around and says wistfully: “I moved to Beacon. I’m not acting. So this is my creative outlet, I guess.” Then she says the exact same thing a second time with a slightly different inflection, as if working through her lines to see which approach feels best.

Greene doesn’t spell out for us who Burre is, though, for a long time. In yet another method of challenging his audience, he drops us into her life and lets us figure it all out for ourselves. About a third of the way into the film, he shows her talking on the phone with someone about a possible gig, and in that call, she lays out both her resume and her game plan.

Burre had a recurring role on the HBO drama “The Wire.” After about 15 episodes, she was noticeably pregnant with her son, who’s now 8, and that was the end of that. She and Tim had romantic notions of leaving their apartment in the big city, where she’d also done some theater work, to raise a family in a small town upstate. Her new role would be parent and homemaker. Tim remains a stoic, peripheral figure throughout, but fleshing him out would have helped us understand Burre—and their relationship—in a larger context. As it stands now, the film can feel a bit insular.

“Actress” is more effective at revealing how Burre is torn between motherhood and stardom, and how she refuses to be defined exclusively by either. Greene’s film is deceptively profound in that it’s about a specific woman with a specific kind of life, yet it has universal resonance as a reflection of the struggle so many women endure—the desire to be all things to all people and inevitably failing someone, the yearning to balance career and parenthood and never finding enough time to do either completely right. (And yes, men often do this sort of juggling, as well, but women tend to be harder on themselves about how well they’re doing it.)

Greene is just as coy in his film’s conclusion, ending on a vague note of hope without giving too much away about its star’s fate. It’ll be interesting, though, to see if Burre’s career does take off again because of “Actress”—if by being “real,” she’s created the ultimate highlight reel. 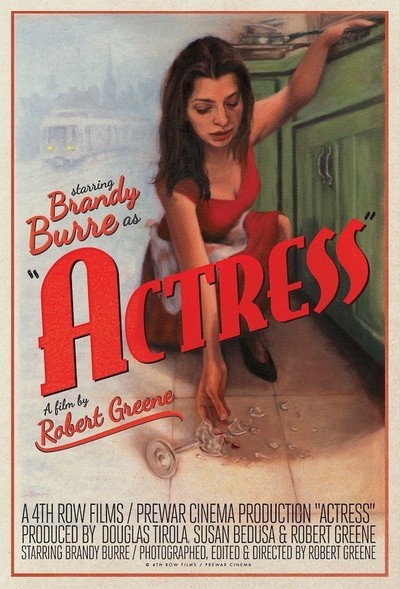