“Primal” is a programmatic action-thriller that sounds a lot crazier than it actually is: Nicolas Cage, playing jungle poacher Frank Walsh, must stop a ghost jaguar and murderous escaped prisoner Richard Loffler (Kevin Durand) from terrorizing a cargo ship’s passengers and crew. Granted, the movie does feature a few endearingly goofy scenes where Cage acts like Humphrey Bogart, with sweat on his brow, a stogie in his mouth, and a haughty putdown for anybody who makes eye contact with him. But he basically already did that in Paul Schrader’s underwhelming 2016 Ed Bunker adaptation “Dog Eat Dog.”

So while “Primal” is supposed to be a star vehicle for Cage (“Arsenal,” “National Treasure: Book of Secrets”), it’s mostly enjoyable for its charismatic ensemble cast and incidental gonzo elements. I say “incidental” because many of the movie’s higher-concept elements—look, I’ll get to the ghost jaguar shortly—are not crazy enough to be memorable. The filmmakers’ emphasis on their supporting cast members probably sounds enticing given that Cage is joined by Durand, Michael Imperioli, and Famke Janssen, almost everybody is underserved by Nicholas Powell’s uninspired direction and writer Richard Leder’s programmatic scenario, with the exception of an appropriately hammy Durand.

Loffler is a garden-variety psychopath with a long rap sheet, including “crimes against humanity” in a handful of South American countries. You might think that Cage’s Frank, an unlovably cranky ex-zookeeper who resorts to animal smuggling after he falls on hard times, would be the most galvanizing thing about “Primal.” You’d be wrong. Loffler’s often the catalyst for the best scenes in “Primal,” which makes sense given that he’s the only one who makes anything interesting happen in the movie. Loffler shoots animals, threatens a kid, terrorizes army men real good, and sabotages the Mimer Brando, the undistinguished (but large!) freighter that’s carrying both Loffler and Frank’s animals, including his prize ghost jaguar. Loffler is also negligibly supervised by a team of U.S. Marshals, as well as the equally bland attorney Paul Freed (Imperioli) and Navy neurologist Dr. Ellen Taylor (Janssen). In the boat, they chase, yell, and sometimes punch each other.

There’s sadly not much more to “Primal” than that. You might think there doesn’t need to be, but there should be an extra something given how enticing the movie appears to be (from a distance). Unfortunately, Frank is genuinely obnoxious, and not in a charmingly oily sort of way, since Cage mostly corrects people and puffs out his chest while doing it. Durand’s antagonist is also a cookie-cutter villain that was apparently fashioned from the well-loved mold that producer Jerry Bruckheimer used to make dumb (but sometimes fun) maximalist blockbuster thrillers in the 1990s and early 2000s, including Cage vehicles like “Con Air,” “Gone in 60 Seconds,” and “The Rock.” Cage and Durand have two adequately lensed and choreographed fight scenes together, which isn’t surprising given Powell’s background as a stuntman. But Imperioli’s character only pushes the plot along while Janssen sometimes dresses down Cage’s antihero protagonist and inadvertently proves him right (by being threatened by Durand’s villain). Most of “Primal” follows the Marshals and the ship’s crew as they go about their respective duties of capturing Loffler and maintaining the Brando. Beyond that, there’s nothing doing with them, either.

Face it, tiger: “Primal” is boring. Frank’s exotic animals, some of which are computer-generated, liven up a couple of transitional scenes, but these brief sequences appear retrospectively disappointing since they promise livelier set pieces that are never delivered. Like, Frank owns a macaw named Einstein, but the bird doesn’t say much of interest. And as for the above-mentioned ghost jaguar: there’s not enough of her in this sleepy B-movie. There’s a brief, supercut-worthy scene where Cage happens upon the jag while she stalks around the Brando’s mid-deck. There’s also a funny moment where Frank boasts to a disinterested (and soon-to-be-imperiled) child about his jaguar right after she rips a hole in the tarp hanging over her container.

But even Frank’s jaguar—which looks like it defected from a pleasantly dated Playstation 2 video game—isn’t much fun, with the notable exception of the movie’s unusually patient cold opening. In that introductory scene, the camera tracks up a tall tree to find Cage, reading a Real Estate magazine, with his feet dangling over the edge of a makeshift elevated platform. He smokes a cigar and sweats while waiting for the phantom cat to take the bait: a rotting goat carcass, strung up by its hooves and surrounded by a swarm of flies. Frank’s cat soon arrives, and does what she’s expected to, like everybody else in the cast does. I just wish that her creators had delivered a wilder (or maybe less sleepy) time-killer. 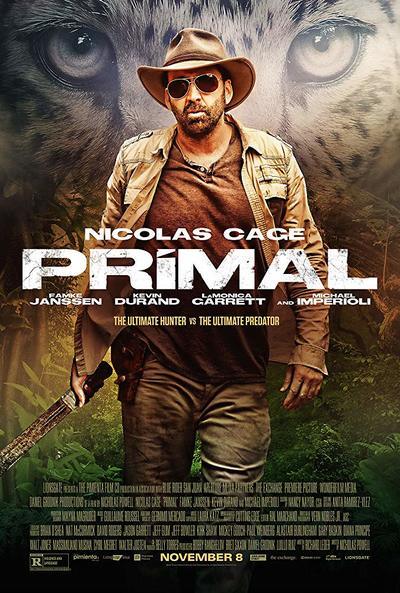