Loud, trashy, sweet and weird, the Mighty Morphin Power Rangers reboot “Power Rangers” is not merely an ideal film for rambunctious and undemanding 12-year olds, it actually sees the world through their eyes.

In theory, the heroes are high school students. But they’re actually a Disney Channel-styled fantasy of the splendors that await kids when they finally become full-fledged teenagers and can Do Whatever They Want. These heroes are misfits. They gather in detention in their high school, a scenario that promises to turn into “The Mighty Morphin Breakfast Club Rangers.” Lo and behold, that’s what you get: a mix of shenanigans, heart-to-heart talks and widescreen punch-outs between monster battles.

The team consists of Jason Scott (Dacre Montgomery), the future Red Ranger, a juvenile delinquent with a barely disguised noble streak; Kimberly Hart (Naomi Scott), aka Pink Ranger, a depressive who’s in detention for texting an embarrassing private photo of a classmate; Billy Cranston (RJ Cyler), aka Blue Ranger, who’s got a spectrum disorder in this version; Becky G as Trini, the soon-to-be Yellow Power Ranger, who stays a blank slate until the movie fills in her backstory during the second half; and Ludi Lin as Zack, the Black Ranger, who was African-American in the original TV series but has been cast as Asian here.

The teens are trained by Zordon (Bryan Cranston), sole survivor of a prehistoric battle that ended with a meteor wiping out the dinosaurs. He wants them to defend the Earth against his nemesis, Rita Repulsa (Elizabeth Banks), by karate-kicking and body slamming Rita’s beloved stone golems, then joining forces to defeat a gigantic golden warrior called Goldar.

There's a plot about the Rangers trying to protect a crystal hidden inside a Krispy Kreme donut shop, and a detailed mythology about the life force of planets, but while Rangers purists will appreciate the fine points, the film doesn't get too hung up on them. The best way to save humanity, Zordon explains, is to kill Rita. To drive this point home, the film repeats the phrase “kill Rita” so often and with such zeal that it becomes a shared joke between the movie and the audience. “Let's go and do the one thing that's been asked of us and kill Rita!" Jason exhorts his colleagues. “I shall destroy Rita myself!” Zordon proclaims when the training isn’t going so well.

The “stronger together” message of the original show has been given a post-Obama makeover here, sometimes convincingly, other times awkwardly. The film’s marketing hypes the fact that Trini has been re-imagined as the first openly gay superhero in movie history, and that is quite a milestone; but if you go out for popcorn in the scene where that’s established you might not figure it out, unless you detect the undertones of Sapphic menace in the scene where Rita bullies Trini in her bedroom. (It’s like when Paramount congratulated itself for making Sulu gay in “Star Trek Beyond” when all it did was give audiences a two-second glimpse of a photo revealing that Sulu's significant other was a man. Um, thanks?)

Billy, however, becomes a genuinely memorable character, thanks mainly to Cyler’s heartfelt performance (which overcomes a lot of fuzziness about what, exactly, the character’s condition is). And the screenplay makes this cheerful kid the heart and soul of the group, and sometimes its comic relief, without sapping him of dignity. Zack fares well, too: he loudly advertises himself as the “crazy” one, but in private moments he cares for his sickly mother with the same grim matter-of-factness that the title character of "Logan" brought into Professor X’s room along with meals and meds. (Zack and his mom speak Mandarin with English subtitles, a nice touch.)

Writer John Gatins and director Dean Israelite make sure to take the characters’ emotions seriously even as they celebrate the ridiculousness of everything else. Nailing the tone in a film like this is so important that if you manage it, the audience will forgive missteps. There are plenty here, including haphazard plotting, connect-the-dots characterizations, and nervous, jittery, over-edited filmmaking that only snaps into coherence during a handful of crisp action scenes (the best is an opening car chase done in a single take from inside a moving vehicle, à la “Let Me In” and “Children of Men”).

But every time your eyes are about to roll back into your head at the film’s slovenly direction and editing, it’ll throw in moments of pathos or images of eerie beauty (everything involving gold or water is aces). Or it will veer into three-hanky melodrama and inflict distress or bodily harm on a character you’re surprised to realize you’ve grown to like. The action is decent, occasionally splendid, near the end, although there are sure to be complaints that the movie takes too long to get the teens into their armor. It also hits too many overly familiar action film beats (including a side-by-side power walk), but if it hadn't, a lot of viewers would wonder why the filmmakers were stinting on the stuff they came to see (the power walk is pretty great).

What stands out about the film—and what consistently saves it, even when the direction is at its cruddiest—is its sincerity. “Power Rangers” really does believe that people are stronger united than when they’re going it alone, and it embeds that conviction into its action scenes. It also encourages its supporting players to cut loose and have fun, and boy, do they: Bill Hader’s training robot is pleasingly droll. “This is the pit,” he chirps, showing the heroes a pit full of dirt and rocks, then adds, “It’s great, right?” Banks’ slinky performance seems modeled equally on Tim Curry’s Dr. Frank-N-Furter and Sigourney Weaver as the demon-possessed Dana in the original “Ghostbusters.” She walks with slightly wobbly confidence, like a society lady who’s too old to be wearing such high heels. This is a film where a character's dad drives a pickup truck into the middle of a superhero battle to make sure his son is okay, and another character shouts “I love my mom!” so joyously that it echoes in the canyons.

I’ve seen complaints that “Power Rangers” is too crude in its humor, too precious in how it establishes its characters' outsider status, and too obvious about its product placement (the words “Krispy Kreme” are spoken nearly as often as “kill Rita”). All three charges are true. But I'd also suggest that a viewer's level of offense will likely be proportionate to how thoughtful they expected a film like this to be. The Mighty Morphin Power Rangers is a subsidiary of Saban Entertainment, created to sell merchandise. It never had much artistic integrity to lose, so the fact that this film actually has some is amazing. This big-budget teen fantasy is essentially an unauthorized "Transformers" movie that has a moral code and is suitable for kids, in stark contrast to the actual "Transformers" franchise, which has prided itself on being snide, leering and hateful. "Power Rangers" is earnest and it has a good heart. There should be more movies like it, only better-made. 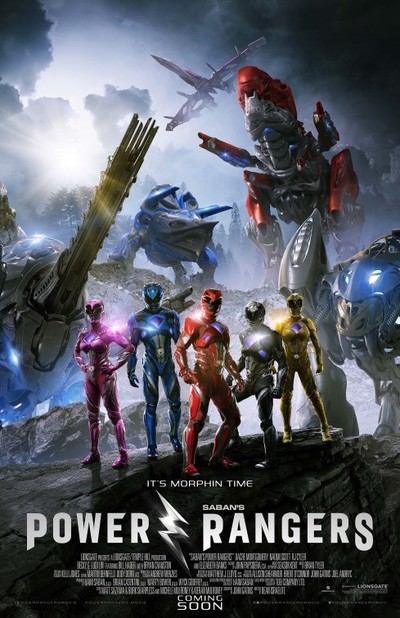 Rated PG-13 for sequences of sci-fi violence, action and destruction, language, and for some crude humor.

Writer (based upon "Power Rangers" created by)