When Andrzej Żuławski’s “Possession” had its world premiere at the 1981 Cannes Film Festival, it became, with the possible exception of the European debut of “Heaven’s Gate,” the most controversial of that year’s entries. The film also earned Isabelle Adjani, along with her work in James Ivory’s “Quartet,” the prize for Best Actress. However, when it was released in Europe, "Possession" was not a box-office success and would make the notorious list of so-called “video nasties” that were banned in the United Kingdom because of their supposedly harmful content. In America, its reception was even worse—it wouldn’t be released for another two years and when it was, it was dumped just before Halloween with a third of its running time removed in an attempt to make it resemble a straightforward horror item, inspiring mostly terrible reviews from the few critics who bothered to look at it.

But the notoriety surrounding the film ensured that a cult would develop around it over the years, even in America, where the full-length version eventually turned up at repertory screenings and occasional showings on TCM. Now, to mark the film’s 40th anniversary, a new 4K restoration is here. To watch "Possession" again is to realize that it remains one of the most grueling, powerful, and overwhelmingly intense cinematic experiences that you are likely to have in your lifetime.

Because the plot of the film is both insanely complex (God only knows how it must have played in that shortened version) and dependent on a number of outrageous surprises, I will keep my summary brief. Set in West Berlin, the film opens as spy Mark (Sam Neill) returns home from his latest espionage mission to discover that his wife, Anna (Isabelle Adjani) wants a divorce. Mark very reluctantly agrees to move out and leaves their young son, Bob (Michael Hogben), in Anna’s custody, and then proceeds to go on an extended drinking binge. Afterwards, he returns to the apartment and is horrified to discover that Bob has been left for what has clearly been some period of time. When Anna returns, Mark insists on staying with them, unwilling to leave Bob alone with her anymore. She takes off again in the middle of the night and Mark gets a phone call from her lover, Heinrich (Heinz Bennent), informing him that she's staying with him.

The already frayed situation soon grows increasingly bizarre. Mark meets Helen, Bob’s schoolteacher, and is startled to discover that she's an exact lookalike for Anna. Mark pays a visit to Heinrich, who insists he hasn’t seen Anna in a while and then beats up Mark. When Anna does make an appearance, they also fight—one argument ends up with each one cutting themselves with an electric knife—before she flees yet again. Mark eventually decides to hire a private detective to follow Anna around to find out where she's staying and what she's doing. The detective eventually discovers that she has taken another apartment in a run-down building and decides to go inside to investigate further.

It's at this point that I will say no more about what happens next. Suffice to say, it quickly becomes apparent that the pain, anguish, and borderline hysteria on full display in the opening scenes is only a mere prelude for the incredible amount of physical and emotional brutality to come. I will also point out that the film involves the work of special effects artist Carlo Rambaldi and his contribution is so far removed, both in looks and temperament, from E.T., the character he presented to the world the very next year, that it seems impossible they both came from the same person.

Working in the English language for the only time in his career, Zuławski took inspiration from his 1976 divorce from actress Małgorzata Braunek, transforming the anger and depression that resulted from it into a cinematic primal scream of the likes that few moviegoers had experienced then or have since. This is a million times removed from the dated banalities of “Kramer vs. Kramer” (1979) and the like—perhaps the only thing that comes close to it is David Cronenberg’s “The Brood” (1979) another film that examined the emotional fallout from divorce through the prism of a grisly horror film and even that notably outre effort seems almost staid in comparison to this one. The scenes in which Mark and Anna tear into each other are done with such rage and ferocity that you almost feel as if you are intruding on something that you shouldn’t be seeing, but they are so compelling and deeply felt that you cannot turn away.

One reason for that is the simply incredible performance by Adjani, whose work here is a high-wire act for the ages that starts off with her at 11 on the emotional scale and quickly goes even further without ever going off the rails. Considering that this is the kind of script that most stars, even the braver and bolder ones, pay people good money to keep as far away from them as possible, I can't say what attracted Adjani to the role but something about it clearly clicked, as she throws herself into it with the kind of intensity most could never dream of mustering. This is most evident during the centerpiece scene, a flashback in which she recounts a violent miscarriage that she suffered in a subway tunnel during Mark’s absence and which she says resulted in a nervous breakdown. Recently, clips of this scene have been transformed into memes but to see the whole thing in full and in its proper context is equally horrifying and breathtaking—she brings such a feverish intensity to this scene that there are points where she barely seems human anymore.

From its hypnotic opening moments—aided in no small part by the contributions from cinematographer Bruno Nuytten (which now look better than ever, albeit in a largely grey and grimy manner) and composer Andrzej Korzyński—to its absolutely terrifying final moments, “Possession” is a singular work of art that, now seen in its intended form, deserves consideration as one of the supreme horror films of its era. That said, for all of its grisly goings-on (and there are a lot), this is more of an exercise of emotional horror and on that level, it's absolutely devastating. “Possession” is one of those films you will either love or hate, but which you will never ever forget, no matter how much some of you may wish that you could.

Now playing theatrically and digitally via the Metrograph; in theaters nationwide on October 15. 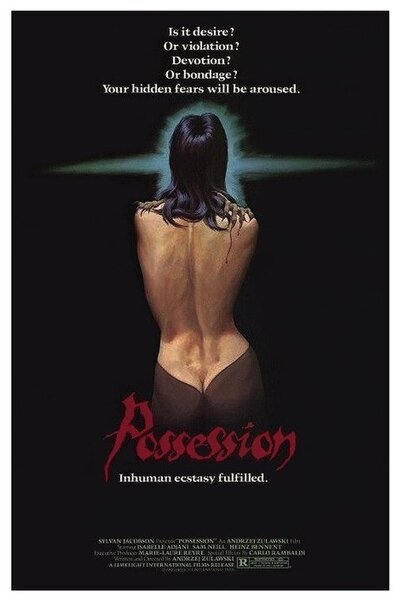