Over the last few months, Netflix has released a number of highly acclaimed and duly celebrated films, including the recent Oscar nominees “Roma” and “The Ballad of Buster Scruggs” and such equally fascinating and worthy titles as “Private Life,” “Happy as Lazzaro” and “The Other Side of the Wind.” Yes, one can certainly debate about the downside of the limited opportunities to see them in their proper setting—actual theaters—but in terms of sheer quality, a run of titles on that level is enough to build up an enormous amount of good will among movie buffs that would take far more than one lousy film to wreck. And yet, while their latest release, “Polar,” may not quite accomplish that seemingly impossible task, it comes far closer than any sane person could hope. A gross, stupid and relentlessly ugly film from start to finish, this may not be the absolute bottom of the barrel in terms of Netflix Originals but nothing else worthy of that title immediately springs to mind.

Based on the graphic novel Polar: Came from the Cold, “Polar” stars Mads Mikkelsen as Duncan Vizla, who is just about to retire from his career as the world’s most skilled and deadly international assassin. This is not necessarily his choice but the shadowy organization that he works for makes it a policy of not employing anyone beyond their 50th birthday—the tradeoff is that they are given an extremely generous pension package that pays off nearly in full to them upon retirement. Unfortunately for the company, too many people are coming up to their retirement ages and instead of paying them all off and jeopardizing an important business deal, the head of the organization, Mr. Blut (Matt Lucas), elects to instead send his own personal quartet of killers out to kill those employees so that their funds revert to the company. To this end, Blut’s right-hand woman, Vivian (Katheryn Winnick), sends Vizla off to Belarus for a final job that is actually a frame-up. Being the greatest, he sees through the plot immediately, kills all of his attackers and demands that Vizla and Vivian pay up his contracted $2 million fee before slipping away to his remote cabin in a small Montana town.

Of course, where would a film about a retiring assassin be without the presence of a woman who helps him develop a newfound respect for life, to misquote a film far better than this one. This would be Camille (Vanessa Hudgens), the shy woman who lives in the cabin next door. Although initially aloof, Vizla’s cold exterior begins to melt a bit and he is soon chopping wood for her on the sly and agreeing to talk to the young kids at school about his experiences traveling around the world. (“How many of you have seen a dead body that’s been in the sun for three weeks?”) Eventually she trusts him enough to open up about the time that she was beaten and raped by an attacker dressed as Santa Claus. While all of this is going on, Blut’s hit squad is traveling to all the places where Vizla owns properties and slaughtering anyone who happens to be there —unfortunately, Montana is last on the list so we have to see them kill a lot of people along the way.

How all of this plays out from a narrative perspective will not come as a surprise for too many viewers. Hell, the basic tropes are so familiar that this is actually the second film I have seen in the last two months about a retiring hit man going up against the former employers that have betrayed him that features a late-inning cameo from Richard Dreyfuss as one of said betrayers. No, what separates this one from most of its generic brethren is the sheer scuzziness of the approach employed by Jonas Akerlund. Practically every scene, with the exception of some of the moments between Vizla and Camille, ends with someone getting messily shot in the head, an act that appears with such depressing regularity that some viewers may finally give up and shout “I’ll have what s/he/it is having!”

In between the astonishing levels of overblown gore and cheesy T&A on display (joined together whenever feasible and then some), the annoying number of characters introduced simply so they can be killed off a few seconds later and no discernible trace of anything resembling actual edginess, wit or style, “Polar” offers the depressing sight of actors struggling through dreadful material. Mikkelsen is a wonderful actor, of course, but he is so obviously bored throughout that he seems to have taken on the film in the hopes of inspiring someone to fund a fourth season of “Hannibal” and rescue him from such garbage. And then there is Dreyfuss, who isn’t in it enough to make a difference one way or another but whose presence is indeed baffling. All I can think of is that after years of having “Mad Dog Time” being regarded as the possible nadir of his long career, he felt that it was time for a new film to have that honor. Trust me, it makes as much sense as anything else about “Polar,” including the fact that something as hideous as it actually exists. 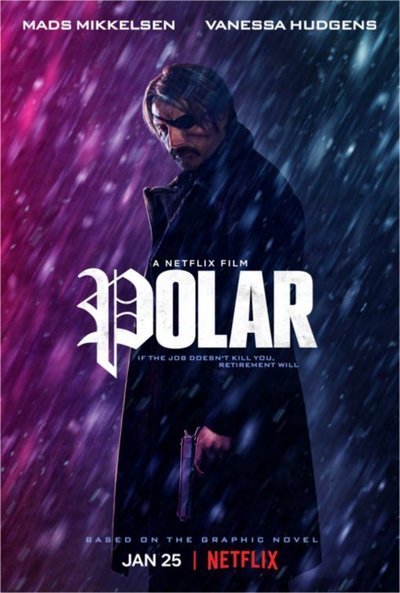