This movie begins with an evocation of space, with shots of a sci-fi desert and a voiceover describing characters we all know pretty well. Dakota Fanning, in the role of a woman we’ll soon know as Wendy, is narrating a “Star Trek” adventure. Is there some copyright infringement issue here that we should know about?

Not to worry, if you are the sort to worry about such things. Wendy, who has a form of autism and has to live apart from her sister, whose relatively newborn baby could fall victim to Wendy’s inability to process anger properly, is a big “Star Trek” person. She’s hell bent on completing an epic (500 pages total) “Trek” film script to submit to a Paramount Pictures-sponsored script-writing contest. (The idea of such a contest actually being sponsored by Paramount, incidentally, is more far-fetched than any “Star Trek” movie or episode; on the other hand, “Star Trek” fan organizations regularly have fan-fiction competitions and such.)

The early portion of the movie sees Wendy struggling in various contexts—with her therapist/caregiver, Scottie (good name!), who thinks she’s making considerable progress; with sister Audrey, who’s still more than a little scared of Wendy’s sudden rages; and with her colleagues at the Cinnabon where Wendy works, tentatively. Soon the focus homes in on the script, and the plot turns on a single fact: having missed getting the script in the mail on Saturday, Wendy realizes “There’s no mail pickup on Sunday, and Monday’s a holiday” and so she’s going to miss the deadline for the submission. She’s close enough to Los Angeles to take the bus, but given that Scottie and (implicitly) Audrey have forbidden her from crossing a particular street in their town, and she’s been obeying that order since forever, she’s pretty challenged in road-tripping.

That being the case, many misfortunes befall Wendy, the first involving the small dog she was unable to prevent following her out her bedroom window at dawn. Mishaps involving thieves, insensitive civil servants, and other such types follow.

“Please Stand By” is a sensitive character study whose story beats are a little bit overly familiar, to be frank. Dakota Fanning is excellent as Wendy. The former child star has grown up to proportions that could be described as rangy, and Fanning in particularly uses her arms to convey the character’s social awkwardness, often flailing them as if batting away unseen demons. Toni Collette is determinedly compassionate as Scottie, and Alice Eve (herself a “Star Trek” movie veteran) is confounded and sometimes helpless as Audrey.

The movie becomes slightly more engaging in the final third, largely thanks to a brief turn by Patton Oswalt as a cop who has a unique insight into how to get the on-the-run Wendy to listen to him. The movie ends with an implausible but potentially crowd-pleasing scene of Wendy asserting herself in a more or less socially permissible way. Director Ben Lewin doesn’t seem to bring any added value to Michael Golamco’s script, but by letting the performers do their best stuff, he makes “Please Stand By” palatable even in its most commonplace moments. 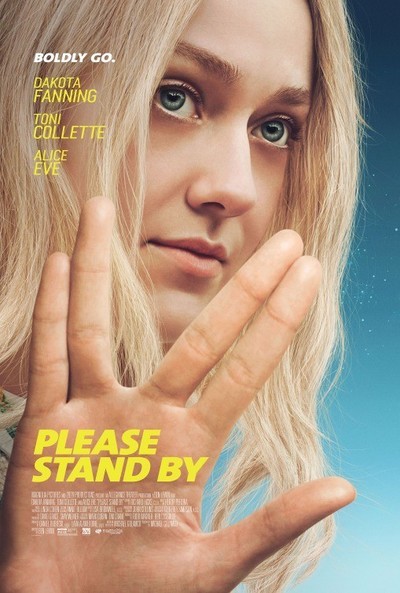