Films about writers are tough enough. Films about writers who think they’re the smartest person in the room and too cool for the love story in which they’re essentially starring are even more ill-advised. Such is one of the many problems with “Playing It Cool”, a movie that suffers greatly from its tendency to constantly remind you that “This is a Film About WRITERS.” Our narrator not only comments on the action of the piece incessantly, he’s credited as “Me”. And the narcissism doesn’t stop there. This “Me” constantly reminds us about how differently writers see the world, how idiosyncratic they are, how smart they are, how much better they are than you, etc. It’s like being stuck in the head of a Creative Writing student who looks down on everyone else's major. And the film ultimately falls victim to the false assumption that highlighting clichés makes them easier to bear, when, in fact, I find the opposite true. Embrace your manipulation, don’t pretend you’re above it before you use it. Only the really strong cast, including great chemistry between the leads, keeps “Playing It Cool” from totally derailing.

Chris Evans plays the narrator, a lovelorn, one-night stand type whose mom left him years ago with a note on the Cap’n Crunch and whose heart isn’t just on his sleeve, it’s taken form and follows him around, chain-smoking. Then, of course, he gets smacked in the face with love when he meets “Her,” played by the lovely Michelle Monaghan. It wouldn’t be a movie if our object of desire was single, and so we get an uptight beau named “Stuffy” (Ioan Gruffudd) to eventually overcome. More problematic for our hero is the fact that he doesn’t really believe in the love in which he’s falling. He talks through his concerns with writer friends Scott (Topher Grace), Lyle (Martin Starr), Mallory (Aubrey Plaza), and Samson (Luke Wilson)—a group of characters so poorly realized that I started to wonder if they weren’t all figments of our writer’s imagination.

“Playing It Cool” is so self-consciously trying to convince viewers that it’s the smartest romantic comedy in years that it never bothers to create characters. I’m sure writer/director Justin Reardon thought he was being clever in his construction (unnamed characters who constantly comment on their own clichéd situations) but the result is an annoyingly pretentious piece of work. There’s more “commentary” about writing and love in “Playing It Cool” than actual romance or friendship. It defiantly fails the “show, don’t tell” argument. It is all telling.

Which adds to how remarkable it is that Evans and Monaghan keep the film from becoming totally unbearable. He’s likely to always be most famous for Captain America, but I’ve always found him a likable actor—believable, charismatic, smart. Evans is up for anything. It’s Reardon’s fault that he doesn’t give him anything consistent to do. Evans’ writer is a total narcissist—he literally puts himself in the leading roles of every story his writer friends tell him. Lovely, right? And yet Evans is too likable to make this guy the total asshole he probably would be in real life. Similarly, while we never quite understand what Monaghan would see in him besides the physical, she’s a typical delight. She’s another actress I’d love to see get better work. Maybe they should both stay away from films about writers. 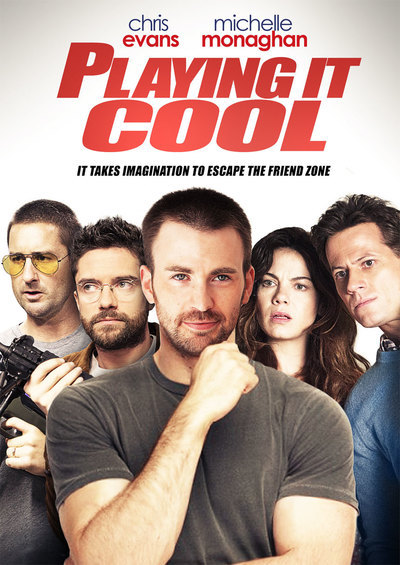 Michelle Monaghan as Her