Like the titular puppet at its center, “Pinocchio” lingers in an existential purgatory. The latest live-action remake of an animated Disney classic occupies an uncomfortable creative middle ground between remaining true to its beloved roots while also aiming to be fresh for modern audiences. Familiar lines share space with snarky one-liners. It’s not just a block of wood, but it’s not a real boy, either.

Robert Zemeckis’ high-tech reinvention is faithful to the Italian children’s novel source material and the 1940 original film, but it also features new songs and cheeky pop-culture references. (Most of them clang and feel forced, but one is admittedly laugh-out-loud funny). So yes, you get “When You Wish Upon a Star” (which powerhouse Cynthia Erivo now sings as the Blue Fairy), but you also get little meta bits about education, parenting, and the perils of fame. The result is a muddled mixture, offering some moments of exuberance and humor without ever being singular or exceptional.

It certainly makes sense that Zemeckis would want to take on this massive project, though, as director and co-writer with Chris Weitz (“About a Boy”). Just as the original “Pinocchio” was groundbreaking in its artistic complexity, Zemeckis has always pushed the possibilities of animation and visual effects, from the dazzling hybrid of “Who Framed Roger Rabbit?” to his pioneering use of motion capture in “The Polar Express.” (And, thankfully, technology has evolved since 2004 to keep human characters from looking so terrifyingly rubbery.)

But while there’s a tactile realism to many of the details, this new “Pinocchio” essentially looks entirely animated. This is especially true toward the end of the perky puppet’s journey when he ends up in the mouth of a ferocious sea monster. But we’re getting ahead of ourselves, and clearly need the sunny narration of Jiminy Cricket (Joseph Gordon-Levitt, star of Zemeckis’ “The Walk”) to keep us on track.

You know the story—it’s a cautionary tale about staying in school and not becoming a delinquent, or worse, an actor—but here’s a refresher. Tom Hanks is at his folksiest as the kindly woodcarver Gepetto, who just happens to make cuckoo clocks featuring various Disney characters like Dumbo and Maleficent, in an eye-rolling detail. This is a comfy cardigan of a role for Hanks to slip into as he reunites once again with the director of “Forrest Gump” and “Cast Away,” and between this “Elvis,” he seems to be enjoying digging into his intentionally hammy side. It’s a goofy, playful performance. It’s fine.

One night, after putting the finishing touches on his marionette, whom he names Pinocchio, the lonely Gepetto makes a wish on a star that brings the toy to life. The Blue Fairy whooshes into the workshop and, with a sprinkling of magic dust, tells Pinocchio (voiced by Benjamin Evan Ainsworth) he can become a real boy if he proves himself “brave, truthful and unselfish.” Erivo is such a majestic sight to behold, you’ll wish there were more of her here—but nope, it’s onto the next thing. Jiminy Cricket is assigned to be his conscience to help him on this mission. But of course, on the way to his first day of school, Pinocchio runs into the fiendish fox “Honest” John, who has other plans for the kid. He’s voiced by Keegan-Michael Key in a performance that’s by far the film’s highlight. He brings the kind of spry delivery and wild, dangerous energy that’s missing elsewhere in this otherwise safe endeavor.

A multitude of adventures ensue, all of which we won’t bore you with here. But they do include a voracious Luke Evans as the Coachman luring children to their doom at the sparkling carnival of controlled chaos that is Pleasure Island. Gone is the illicit thrill of smoking; the new adolescent addiction is being mean to each other on social media! Also: Too much sugar apparently makes kids crazy and want to break stuff, in case you were unaware. The instinct to update an 80-year-old film in such a manner makes sense, but these fixes too often feel empty and add no insight.

As always, the moral of the story is the importance of being honest. Pinocchio learns this through the whole nose-growing fiasco, a crucial element of his journey that strangely plays like a rushed afterthought in this version. In the title role, Ainsworth brings an old-fashioned earnestness that’s almost heightened to the point of self-aware parody. But he’s also stuck overexplaining everything in shrill, frantic fashion by the film’s climactic conclusion, which by then seems totally divorced from the notion of live action. It's just pixels. The score from veteran composer and longtime Zemeckis collaborator Alan Silvestri swells in all the expected, feel-good ways. It’s all very familiar and cozy.

Not to worry, though. If this “Pinocchio” doesn’t work for you, Guillermo del Toro puts his own twisted spin on the classic tale with a stop-motion animation version due out in December. We wouldn’t lie about that sort of thing. 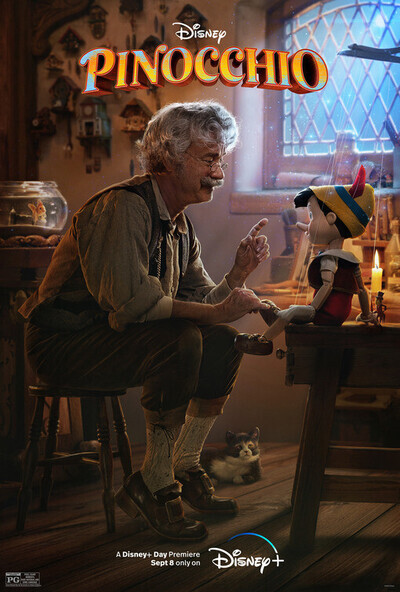 Rated PG for peril/scary moments, rude material and some language.

Luke Evans as The Coachman

Writer (from the story by)