“Pilgrimage” is the kind of movie one fears is going out of style forever. A historical action drama, serious in tone and intent but also invested in delivering movie-movie thrills. You know, like Richard Fleischer’s 1957 “The Vikings” (don’t laugh—although the cast led by Kirk Douglas, Tony Curtis and Ernest Borgnine had some emotive tendencies, the movie overall is well-crafted and gutsy) or, you know, “Braveheart.” As one fears the fate of such a film, one has a tendency to overvalue, perhaps, a contemporary movie in this mode. As it happens, “Pilgrimage” has some of the good but not all.

The movie opens on a moody, barren landscape, complete with threatening grey sky, in the year 55 A.D. A group of men have exposed a Christian, and are going to stone him to death, in spite of what I guess is the warning of thunder and lightning that occurs before the barrage is fully joined. Cut to 1202, and a group of modest Irish monks are the guardians of a sacred relic that we will assume, correctly, is related to the previously partially shown event. We are now in the time of the Fourth Crusade, and a rider in a white robe comes along to say that the relic is requested by the Pope to use in Rome.

Okay, the monks determine after vetting the white-robed rider (Brother Geraldus, played by Stanley Weber); they’ll allow it. A contingent of their own is sent along. Among them is a hulking mute, known as “The Mute,” played by Jon Bernthal, whose agent here seems intent on making the actor over as Richard Kiel without the height. There’s also elder monk Ciaran (John Lynch) and much younger monk Diarmuid, who’s never been off the farm so to speak. He’s played by Tom Holland, now famously Spider-Man in the Disney/Marvel movies. Holland shows promising range here; the character’s undeniably young but hardly callow, and the movie’s narrative presents him with substantial moral challenges that the actor processes intelligently.

Once the group sets off, fervently guarding the reliquary, “Pilgrimage” usefully makes the raw terrain the characters cross into an active antagonist. Soon some Norman troops are engaged, and a little after that a raw group of men attack the monks. The action is brutal but not too bloody. The Normans are keen to hold the sacred relic captive; they believe that by withholding it from the Pope, they can get the church to capitulate to their emperor.

That something so awesome as this relic—whose “miraculous power” and general import is revealed in a continuation of the 55 A.D. episode, recounted by one of the characters—is being used as a political pawn makes an impression on Diarmuid, who begins to question his faith. Geraldus, on the other hand, seeing how deftly The Mute handles himself in a battle, proclaims that The Mute is himself an extension of the relic’s power. Does the brother believe this, or is he cynically egging on his companion monks? The movie never says so explicitly.

But it also, I regret to report, does not make the questions themselves all that compelling in context. This despite being serious-minded enough to conduct the storyline in languages ostensibly accurate to the period and settings: Irish, French, and English. By keeping its focus on the men in the forests, “Pilgrimage” generates a largely admirable “you are there” sense of foreboding, but it also constricts the storytellers’ ability to engage the film’s larger themes in a way that give any real idea of what’s at stake. It’s interesting as far as it goes, but you wish it would have gone farther. 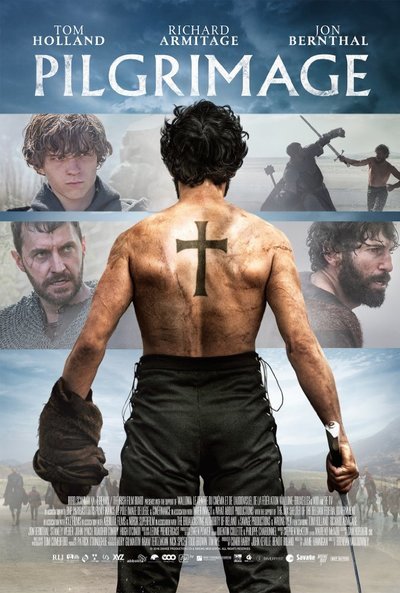 Jon Bernthal as The Mute