More than his constant self-amusement, singular costuming or aggressive boyishness, the dark artifice of Pee-wee Herman’s life has always been the character’s most fascinating characteristic. How does a person, even in a cartoonish world, become this way? How does one find everything so funny all of the time, while often resisting intimacy? What is the world like for them when they go home alone and turn off the light? His latest adventure may not be the Michael Haneke and Pee-wee Herman collaboration that I would pay a hundred dollars to see just a preview of, but it is an entertaining romp starring one of the ultimate figures of arrested development, made possible by the King Midas of man-child comedy, executive producer Judd Apatow.

Directed by John Lee (the other perfect pick for a Pee-wee Herman movie considering his previous TV-MA kids show “Wonder Showzen”), “Pee-wee’s Big Holiday” starts off with nostalgia and promise. In the first scene, Pee-wee (played by Paul Reubens) has a bizarre nightmare that has him screaming in his sleep, “I can’t leave here!” Seconds later, it’s morning, the darkness has subsided, and it's back to his Rube Goldberg routine, an operation that is bigger and better than ever. In a way that kicks down the door on any skeptics, this wondrous re-introduction broadcasts the inspiration behind this decades-overdue sequel, and is so giddy that it makes the home viewing of Netflix feel like a bit of a downgrade—along with other jokes here, it’s the type of fun you want to witness with a lot of strangers in a dark room.

What happens next is even more exciting: a brief look into Pee-wee’s life, a glimpse at how he might be able to pay the bills, or what he does with his day when we’re not watching him. We see that he works at an old diner, a place that’s just one entity in the disturbingly vintage town of Fairville, which is decked out in minty, saturated colors, showing a “Cartoon Festival” at the main street monoplex, and might as well be called “Pleasantville.” If Pee-wee Herman is a walking time capsule, then the kitchen of the Fairville diner, where he cooks alone, is the environment in which he is stored.

As happenstances so readily find Pee-wee in his films, so does “Magic Mike” actor Joe Manganiello, who influences him to travel outside of Fairville for the first time. By this point, the script from Reubens and Paul Rust has achieved a rich amount of context before it sets Pee-wee off on his travels. Most importantly, it places “Pee-wee’s Big Holiday” as a staunch reboot, taking place in a world where “Pee-wee’s Big Adventure,” or even the nightmare fuel that is the heavily-implied sex scene from “Big Top Pee-wee,” never happened.

Born again under Apatow’s tutelage as The 63-Year-Old Virgin, Pee-wee embarks on a journey that, with respect to an email I received from Pee-wee himself (via the computer he had installed in his 2011 Broadway special, one assumes), I shall tread lightly with. The unpredictable but quick moments that happen to Pee-wee fall in thematic line with his existence, where a modern world is full of people who resist the passage of time, (characters dressed in Russ Meyer-inspired costume design, the Amish) while middle-aged men often openly mourn maturity, whether they’re living in the woods or are Joe Manganiello. As comedy, the events are more often charming than funny; even when some sequences fall flat, they show a dedication to the surrealism that’s charismatic.

In this ultimately successful showcase for his masterpiece character, Pee-wee becomes a perfect Pagliacci for Apatow’s authorship, a clown inspired by the comedy and tragedy of wearing the same clothes in the same place for a duration of time in which age becomes obsolete. Even the way in which the lighting tries to hide the wrinkles on Reubens’ face is fascinating, his attempts to appear ageless creating a new mask. But even if he feels to be laughing to himself a little less than usual, inspiration continues to flow through Reubens. For all of the film’s spectacle, he has a show-stopping moment with a balloon, as shot in one take. Aside from being as funny as it is elementary, it will remind you of how this masterpiece character transcends age, and instill hope that he’ll have more adventures before he can no longer leave his playhouse. 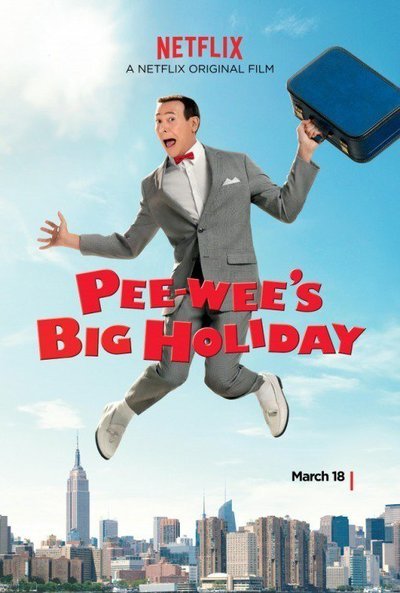 Pee-Wee Herman as Himself