When it comes to Nickelodeon's animated "PAW Patrol" series, adults generally fall into two categories. The first are intimately aware of the Canadian show because they live with small children. They know the details of its rescue puppy characters and the many, many purchasing opportunities, from stuffed animals for each of the characters and toy versions of their many vehicles to t-shirts, bed linens, birthday party decorations, backpacks, and a book to help with potty training. They laughed at Roy Kent's reference to "PAW Patrol" in the latest episode of "Ted Lasso."

For everyone else, the only connection to the media and marketing juggernaut that is "PAW Patrol" is some vague familiarity with complaints on Twitter, from parents stuck at home with nothing but Zoom school and "PAW Patrol" re-runs on Nickelodeon.

For those who need some background: PAW Patrol is along the lines of Avengers or Justice League for children. A boy named Ryder (Will Brisbin) is the Nick Fury, the human leader of a group of adorable puppies, each with a special set of talents and a Transformer-like vehicle and most with a rhyming catch-phrase. Every episode has a daring rescue to accomplish with courage and teamwork.

Kids love them because the puppies are cute, brave, and capable. Also, like a boy band, the group is varied enough that each child can find one to identify with or pick as a favorite. Like the stories that children have loved for as long as there have been stories, "PAW Patrol" is about young characters triumphing when grown-ups are hostile or ineffectual. Instead of witches and giants, the menace is Mayor Humdinger (Ron Pardo), who looks like the guy on the Monopoly Community Chest cards. He is a childish, egotistical, election-rigging big city boss who wants his building to be the tallest and refuses to listen to experts or scientists. I wonder how they come up with these wild ideas!

To supersize the PAW Patrol for the big screen and make it more palatable to parents, there are some upgrades in the voice talent. "Black-ish" star Marsai Martin is the highlight of the film as Liberty, a city dog and PAW Patrol fangirl who calls in the pups when Humdinger impetuously sets all of his inaugural celebration fireworks at once. Liberty, who longs to join the Patrol, helps address the series' gender imbalance, previously just one female dog. A number of celebrities, some with young children who are likely fans of the show, provide voices as well, with Jimmy Kimmel as newscaster Marty Muckraker, Martin's "Black-ish" co-star Yara Shahidi as a climate scientist, Dax Shepard and Randall Park as Humdinger's bickering henchmen, Tyler Perry as a truck driver who needs a rescue, Adam Levine on the soundtrack, and Kim Kardashian West as (what else) a pampered poodle.

As the children cheer on the action scenes and gently silly comedy, parents may pay more attention to a sweet sub-plot with fan favorite Chase (here voiced by "Young Sheldon's" Iain Armitage), who is ashamed because returning to the big city reminds him of how terrified he was before Ryder found him there. Ryder is able to reframe the memory in a way that helps Chase see how strong he was, even when he was scared, and he learns that even heroes are not brave all the time. Parents will appreciate the way the pups tackle problem solving, working together to make the best use of each character's talents, coming up with alternative strategies when the initial plans are not working, and understanding the mistakes made by team members.

Parents may not find much humor in a joke about how the pups' expensive SHIELD-like headquarters and technology are funded by merch, or the depiction of adults as helpless or corrupt or both. But it would be a mistake to project a political message when it's simply recognition of the importance and value for children in stories—from Hansel and Gretel to Pippi Longstocking to Harry Potter—to be able to take care of themselves and others. Still, they may want to talk to children after the movie about whether someone always has to be the "alpha" and whether we should laugh at the embarrassment of others, after they find out which puppy is their favorite and what adventure they'd like to see the PAW Patrol have next.

Now playing in theaters and on Paramount+. 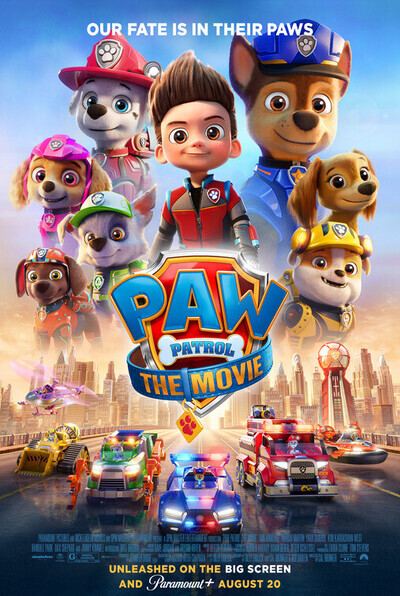 Will Brisbin as Ryder (voice)