If "Patti Cake$" were a song, it would be the kind you hear on the radio and get excited about singing along with, until you realize it's not the song you thought, but another one that sounds like it; and because you liked the first song, you like this one, too, and after hearing the new one a few times you start singing along it.

Written and directed by filmmaker and musician Geremy Jasper, who also did the film's original soundtrack, it's the story of of a plus-sized, working class white teenager, Patti "Dumbo" Dombrowski (Danielle Macdonald, an Australian actress making a sensational American debut). Patti works a series of menial jobs while trying to make it as a rapper with the encouragement of her hip-hop-loving best friend Jhen (Siddharth Dhananjay). People constantly make fun of how fat she is and how white she is, sometimes at the same time, depending on the situation. There's also a strong element of flat-out sexism in young men's responses to her, whether they're black, white or brown. A big white girl can't make it as a rapper, they tell her. The very idea is ridiculous.

Of course they're wrong, because this film is "8 Mile," with a big woman in the lead, and set not in Michigan but in the post-industrial jumble of northern New Jersey (Bruce Springsteen country; he even has a song on the soundtrack). The film turns into "Purple Rain" when it shifts focus to Patti's fraught relationship with her mother Barb, brilliantly played by actress and singer Bridget Everett. Like Prince's "Kid" in his 1984 movie breakthrough, who struggled to define himself apart from his dad (Clarence Williams III), a failed professional pianist and wife-beating drunk, Patti is simultaneously inspired and embarrassed by Barb, a onetime rock singer who was on the verge of a commercial stardom when she got pregnant with Patti.

Barb holds Patti's existence against her at the same time that she sincerely expresses love for her. The scenes between them are the best and most powerful element of "Patti Cake$." Everett's history of using her considerable weight and height as comic fuel in standup and cabaret made her a perfect choice for this role, but she's as strong in the arguments and drunk scenes as she is when she's singing or cracking wise. If there's any justice, this should be a career-redefining performance on the order of Frank Sinatra's in "From Here to Eternity."

If you saw "Purple Rain," "8 Mile" or half a dozen other films about struggling musicians, you know how this tale will resolve: with Patti trying and failing to navigate one road to success (getting a mix tape into the hands of a famous rapper) only to manage a 98-yard dash to victory anyway, via a local rap competition. You also know in your bones that the support of Patti's chain-smoking, handicapped grandmother (Cathy Moriarty) will be the wind beneath her wings (and a financial boost, too), that there'll be plenty of salty-adorable scenes between them as the story unfolds, and that grandma will die before the last reel to give the movie another powerhouse acting moment (as well as a strong link to another plainly obvious inspiration, the "Rocky" series, which made sure to have a tearjerking deathbed or funeral scene for a parent or mentor figure in nearly every installment).

Prince's presence is also felt through another supporting character, an African-American, antiestablishment, punk-metal solo artist named Basterd (Mamoudou Athie), who lives in a secret hideout in a state park that looks like the musical version of a madman's laboratory in a horror film. Basterd speaks in a low, distant voice that conveys immense but highly theatricalized hurt; his backstory, once revealed, only partly succeeds in making him seem less like a white suburban filmmaker's fantasy of a tortured black musical genius. He's the most schematic, in many ways preposterous character in the film.

But he's also the one who is least connected to its shamelessly commercial template, with its many familiar dramatic and visual beats, such as the "training" montages of Patti and the band honing their craft and doing side-by-side slow-motion power walks while hip-hop blasts on the soundtrack; Patti's fights with the supervisors who think she should be concentrating on her day job instead of her art; and the expected moment where Patti looks up from a live performance that means a great deal to her and sees a person that she didn't think would make it staring proudly at the back. (No troubled movie character who shows up at a loved one's performance is ever on time. They always arrive at the last possible second.)

I'm harping on the familiar, formulaic elements of the film not because I'm trying to be mean, but because Jasper, a visually skilled director who's also a natural with actors, foregrounds them in a way that makes them impossible not to notice and comment on. He's sampling the older movies he loves, just like a beginning hip-hop artist samples the records he loves: the breaks are ones that you've heard too many times, and your affection for them is tempered by knowledge that the artist is blatantly trying treating pop culture nostalgia as an emotional crutch and creative insurance policy.

This happens a lot in the early stages of careers. The artist starts by imitating the art that inspired them, and then, with a bit of gumption and innovation, makes them into something new. "Patti Cake$" doesn't succeed at that last part. It always feels a bit too much like a project cooked up in a Sundance lab and precision-tooled for film festival success, and its Mad Libs-like appropriation of underdog movie elements is the least interesting, most irritating thing about it.

What elevates it and makes it special is the attention it pays to local geography and atmosphere, the mundane aspects of working-class Northeastern U.S. life, and the culturally super-specific types of people you'll find in that environment. "Patti Cake$" is at its best when it's showing the intersection of Northeastern U.S. white, black and immigrant youth around hip-hop fandom, weed culture, street corner freestyle contests, homemade studio jams and the sharing of homemade music, all of which affords blessed relief from the drudgery of dead end jobs, unemployment, domestic pain, and discrimination of one kind or another. "Patti Cake$" also captures the way African-American vernacular and cultural signifiers infiltrate the deepest pockets of everyone else's speech and art, whether they know it or not. Some of the sharpest humor in the film comes from watching white characters posture about how another white character isn't street (i.e., black) enough. The movie's documentary instincts are much sharper than its drama and ultimately more memorable. Its sense of place and uniformly superb performances make it worth seeing, and maybe ultimately singing along with. 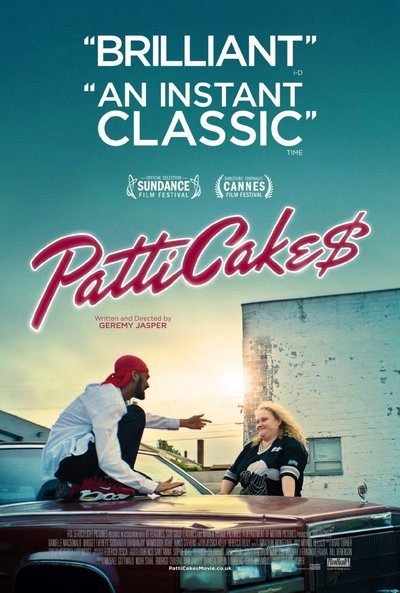 Rated R for language throughout, crude sexual references, some drug use and a brief nude image.