Burt Reynolds seems to have two basic screen characters, which, for ease of classification, we can describe as Bad Burt and Good Reynolds. Bad Burt is a mean ol' boy who tools around the Southland in a souped-up sports car, infuriating sheriffs and making Sally Field cry. Good Reynolds, however, is a guy who used to be macho and heartless, but has grown into a sensitive, caring kinda guy who is trying to build bridges to women and children.

“Paternity” gives us the good guy. The Reynolds character is a lot like the man he played in “Starting Over” and maybe a little bit in “Hooper,” a guy torn between a self-image as a ladies' man and a desire to grow more sensitive. This time, he's the manager of Madison Square Garden, and he leads a lonely but (he thinks) idyllic existence as a New York playboy. He's got a date every night, but there's nobody to come home to. And when he shoots baskets with a friend's son, he begins to realize that he would like to have a son, too. Not a family, mind you. And certainly not a wife. But a son. He sends out feelers for a surrogate mother. All the candidates are impossible or have braces on their teeth. Then he stumbles across a pretty blonde waitress in a restaurant where he has lunch. She's a music student, wants to study in Paris, and will bear his child for a one-time payment of $50,000 (considerably higher than market price, I believe).

The waitress is played by Beverly D'Angelo. She was the rich kid in HAIR and Patsy Cline in “Coal Miner’s Daughter.” She is wonderful in this movie, soft and warm and understanding. Of course, we know (although Good Reynolds is slow to catch on) that they will eventually fall in love. God knows Burt tries to hold out and play the playboy role, but eventually even his sexy dates such as Elizabeth Ashley start to like D'Angelo and to lay a guilt trip on Reynolds.

But a-ha, you are thinking, I have given the plot away. Well, yes and no. I have given the plot away in one sense, but in another sense this movie drives us to the edges of our seat with maddening frustration because it is so slow to give itself away. “Paternity” is absolutely predictable at every moment. Stop the film at any point, and nine out of ten viewers could correctly predict what was going to happen next.

The movie has another flaw. It takes its characters just a little too evenly. Although the movie was directed by David Steinberg, a comic actor with a good sense of timing, “Paternity's” timing is so slowpaced and stately that there are times when this doesn't feel like a comedy, it feels like a historical romance. People speak at a measured pace; they move through scenes as if preprograrnmed; they do not contain the passion and surprise you would expect in a story dealing with matters of sex and life and identity. Too bad. Burt Reynolds can be a most engaging actor; the movie surrounds him with other convincing actors such as Paul Dooley and Norman Fell; Elizabeth Ashley does some nice things with her small role. But “Paternity” is so preordained. It fulfills every one of our expectations with a deadening safeness. It is about a man who wants a child so that he will leave something after himself, but it never convinces us that he has a self to leave. 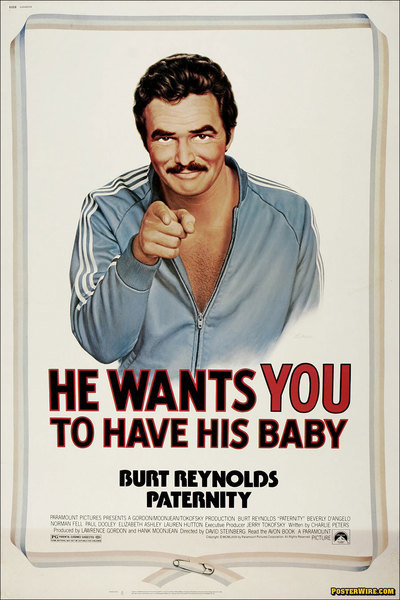