Two years have passed since the Valentine's Day when Marjory Stoneman Douglas High School in Parkland, Florida tragically came under siege at the hands of gunman Nikolas Cruz; 34 students and teachers were shot, 17 of them perished. During the first ten minutes of Cheryl Horner McDonough's "Parkland Rising," we hear audio recorded by students from that day, with cell phone videos and 9-1-1 calls painting the desperation and panic felt by all. McDonough also relies on a present-day roundtable interview with students, led by their AP Psychology teacher Ronit Reoven, to further reconstruct the day.

But “Parkland Rising” isn’t about the deadly shooting, so much as the activism that arose from it. Since that day, Parkland survivors like David Hogg, Emma Gonzalez, along with the parents of Joaquin Oliver and a host of others, have campaigned across the country for stricter gun laws. McDonough's "Parkland Rising" isn't the first documentary to recount the Parkland tragedy—Emily Taguchi and Jake Lefferman did so too with “After Parkland," covering many of the same beats. But through its images of peaceful protests and demonstrations from the era, McDonough's narrow but inspiring film finds deeper relevance in the face of the current protests surrounding George Floyd’s murder.

Unfortunately, many of the familiar names associated with Parkland—mainly Emma Gonzalez, though she does appear heavily in protest footage—did not provide interviews to McDonough, which causes “Parkland Rising" to only scratch the surface of the varied struggles and post-event memorials. With this film being McDonough's second feature-length documentary, one gets the sense that a more experienced director would have better captured the complexities of other survivors. Instead, the documentary frames the resulting activism through the still-compelling experiences of Hogg and Joaquin Oliver’s parents Manuel and Patricia. The two sides, along with other activists, band together for peaceful campaigns for stricter gun laws, protests like “March for Our Lives”—which drew celebrities like will.i.am and Jennifer Hudson—and “Die-Ins,” where Hogg and others laid on the floor of Publix with flowers after the grocery chain donated to pro-NRA candidate Adam Putnam. The timeline of these demonstrations is often difficult to follow in the film, as dates are flagged but their proximity to the activists’ major protests is often left unclear.

Throughout the activists’ political actions, McDonough records their respective struggles in the face of opposition. For instance, Hogg and Gonzalez experienced a barrage of hateful tweets and threats, some of which are included here. And while McDonough blurs many of the menacing handles that produced such bile, she left Frank Stallone calling Hogg a “pussy” unredacted. The teens, in an effort to spur grassroots support, also try to make in-roads with Second Amendment supporters through sobering face-to-face conversations. When pro-NRA protesters bring AR-15s—the same gun used by Cruz—into the Parkland demonstrations, McDonough makes their stomach churning tone-deafness palpable by juxtaposing shots of uneasy and angered demonstrators. In their unwavering maturity, the teens balance appearances on "Anderson Cooper" and other late-night shows, leaving one not just amazed at their awareness, but mournful for their now-lost adolescence.

On the parents' side, McDonough interviews Fred Guttenberg, father of Jamie, and follows Manuel and Patricia Oliver’s creation of public art displays through their program “Walls of Demand.” They’ve dedicated their lives, almost suspending themselves in time, as evidenced by Manuel heartbreakingly packing Joaquin’s bookbag for the return to school at Stoneman Douglas, in an effort to change gun laws. In one scene, Manuel creates a mural while listening to a playlist of Joaquin’s favorite songs—the Pearl Jam coming from his headphones is powerfully contrasted with the silent music-less noise the assembled crowd hears as he’s constructed the piece.

But even as pro-NRA politicians lose their midterm elections due to the survivors’ grassroots efforts, the accumulative efforts by both parents and students often look insurmountable. As Jaclyn Corin explains, when discussing the school’s new ineffectual policy of requiring students to wear clear plastic backpacks, the response to their efforts has mostly been met with band-aid policies by those in charge. Of course, this makes “Parkland Rising” extremely relevant. As violent protests have broken out across the country in response to the death of George Floyd at the hands of police, Black Lives Matter demonstrators have made it clear that they’re tired of band-aids. They’re tired of broken promises from a fractured system. The activists at the center of “Parkland Rising” very much believe in the tenets of peaceful protests, but their aim and disposition is colored by a different time, and a hint of naiveté that the system still works with only rightly applied pressure. 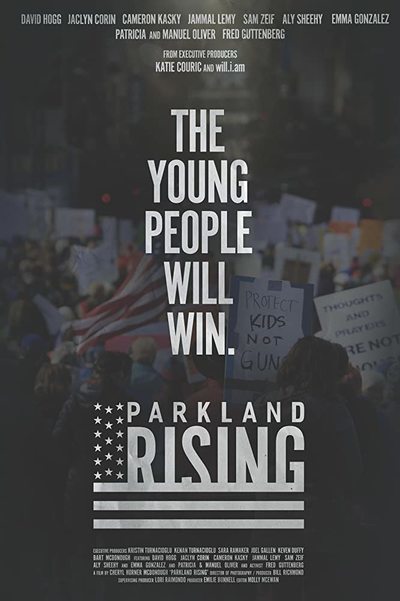