When done well, sci-fi movies give filmmakers the chance to explore the world’s earthly problems through fantastical situations. The setting can be a futuristic world or in space, the villains perhaps benevolent machines went bad or a society that has turned technology against itself. The costumes can be over the top like in “The Fifth Element,” and the production design dusty and dingy as the first planet we set foot in the “Star Wars” universe, Tatooine.

Alice Waddington’s feature debut “Paradise Hills” certainly leaves an aesthetic impression but has a number of filmmaking missteps. The sci-fi thriller follows an unruly young woman of the future who’s sent to a re-education camp for young ladies to become more docile and compliant. Uma (Emma Roberts) befriends one of the other women, a so-called difficult pop star named Amarna (Eiza González), and joins two roommates, a Southern belle named Chloe (Danielle Macdonald), whose parents want her to be skinny, and the music-obsessed Yu (Awkwafina), who needs to control her anxiety if she wishes to go home to her aunt and uncle. A mysterious but poisonous headmistress known as The Duchess (Milla Jovovich) oversees them all in order to return them to their parents as changed young women ready to do as they’re told. But this being a sci-fi movie, things are much more nefarious below the surface.

Even at Sundance, where the film premiered earlier this year, the stills featuring the femme “A Clockwork Orange” meets “A Picnic at Hanging Rock” inspired costumes by Alberto Valcárcel and the futuristic “Alice in Wonderland”-like production design by Laia Colet were among the most striking qualities of “Paradise Hills.” Unfortunately, they are the movie’s best traits. The impressive cast is no match for the movie’s awkward blocking and stilted dialogue. Waddington’s collaboration with cinematographer Josu Inchaustegui leaves the camera at odd placements, sometimes too far from its subjects or unevenly cuts off one of the actresses. During a yoga class scene, Uma and Yu are working together as partners, and although Yu remains in the frame almost the entire shot, Uma unceremoniously falls out-of-sight. This unpolished look feels like a rushed movie destined for Saturday afternoons on the SyFy channel, not something we’ll want to watch over and over again.

The strange world girls and young women find themselves is ripe for exploring through sci-fi. The school scenes mix elements of paranoia (and a few lighting cues) from “Suspiria,” a re-education center that reaffirms hyper-femininity like that of “But I’m a Cheerleader,” the dreamy ambiance of “Picnic at Hanging Rock” and even a little dash of class warfare between the haves and have-nots like in “Metropolis.” Yet, somehow “Paradise Hills” misses its landing and doesn’t figure out quite how to fold all of these elements into the script.

Despite writing credits split between Waddington, Brian DeLeeuw and Nacho Vigalondo, the script is unrefined and simplistic. Characters explain what they’re doing, instead of just doing it. The plot almost holds no surprise in store until the very end. Much of the dialogue is clunky and unsteadily paced, almost to campy levels of bad delivery but without any degree of fun. The editing by Guillermo de la Cal provides little relief, as a number of the cuts linger on for a second or more too late, neutralizing any sense of rhythm between exposition and action. The futuristic music by Lucas Vidal fits fine, but I hope he’s not the man behind the songs sung by Roberts, Jovovich and González because those were dreadful moments.

“Paradise Hills” wants so badly to be a sci-fi movie with a message for right now—perhaps to tap into the feminist anger out there now or to cash in on the interest in women filmmakers—but it feels like a rushed draft. There are a few good ideas, and a few good twists at the end, but it's not enough to make up for the rookie mistakes that undercut its potential. The movie bluntly comes out against the societal pressures on women to conform to patriarchal expectations but without the tact of “The Handmaid’s Tale” to wrap it into an allegorical warning or shape them into the thrilling reveals in “The Stepford Wives.” When the movie begins to spell out its message instead of trusting the audience to figure it out for themselves, it loses its luster and a part of what makes this genre so fun to watch. No amount of stylish production values and costumes can make up for that. 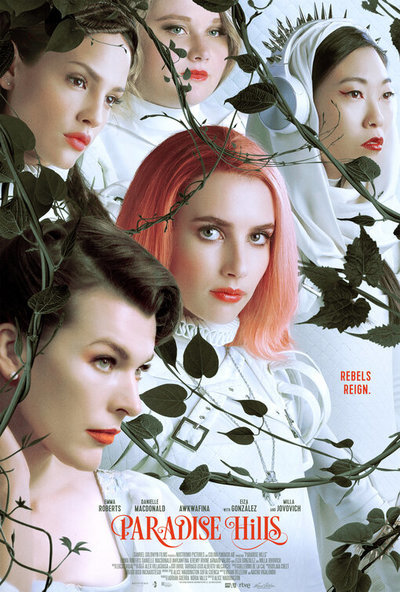 Milla Jovovich as The Duchess