What bet did Juliette Binoche lose? I only ask because writer/director Anna Gutto’s melodramatic thriller “Paradise Highway” is the kind wayward, tonally muddled project an actress the caliber of Binoche would only sign onto if promises were broken and payback was required.

It’s difficult to know where to begin with the autopsy of “Paradise Highway.” Shall we discuss the cliché “One Way or Another” needle drop? How about the superfluousness of several character arcs? Or maybe how this movie takes a great interest in broken systems without sketching the humans at the center? Gutto’s film certainly doesn’t fail to remind viewers of its importance. But you spend the entirety of its languid, nearly two-hour run-time wondering when this serious narrative will find space to be good.

As Sally, a big-rig trucker traversing America’s south, a miscast Binoche occupies our primary focus. Sally worries deeply about her troubled brother Dennis (Frank Grillo). Though he’s nearing parole, a few unknown factions within the prison thrash him. They demand his sister pickup and transport a package across state lines. Sally agrees, but gets more than she bargains for when she meets the two smugglers—Claire (Christiane Seidel) and Terrence (Walker Babington)—only to discover the package is a young girl, Leila (Hala Finley), condemned to a sex trafficking ring. Sally’s plans go awry when Leila murders a man at the drop-off location, sending the pair on the run to figure out how to remedy the situation before darker underworld forces find them.

Sometimes a movie fails because the director carries the worst intentions. What’s difficult to stomach is when a film falters despite a director’s best objectives. "Paradise Highway" falls in the latter category. Gutto wants this movie to serve as an indictment of a system. Traffickers get away with selling young women because the authorities simply do not care. To combat that reality, she teams a retired grump in Agent Gerick (Morgan Freeman) with a fresh, naive upstart Sterling (Cameron Monaghan) as two cops who do care. Through their dedicated eyes, Gutto interrogates the heinous punishment subjected on women by trafficking and the various, unfathomable ways the police perpetuate these crimes through inaction. Beyond that didactic intent, Gerick and Sterling serve very little purpose as they trace the country in Gerick’s station wagon looking for Sally and Leila.

While Binoche is still a wonderful, affecting actress, hence my surprise to see her here, the recent downturn by Freeman defies understanding. Here, as Gerick, a shadow of his work as Captain Jack Doyle in “Gone Baby Gone,” he spends much of his time dropping f-bombs that are meant to serve as punchlines (maybe?). Even when Binoche and Freeman appear on screen together, the pairing isn’t enough to rouse the distinguished Freeman back to his former heights.

If you squint you can nearly see the kind of movie Gutto might be aiming for. The opening scenes, for instance, feature Sally talking on a CB radio with other women truckers. She shares a caring, open relationship with them as they support one another on a road often occupied by sexist, predatory men. For a second, you think Gutto might expand this world. But she withholds. We don’t see these other women, for some unconscionable reason, until much, much later.

That doesn’t mean the writer/director totally ignores women. In fact, every scene is composed around the women who occupy the different stratas of the trucking world: One mother begs outside of the outposts for money and food; another, a Black mother and son, are barely shown, except in a check-the-box-of-diversity fashion. And in others, we do peep some women grocery clerks at the rest stops and on the road, other women truckers too. The more successful attempts demonstrate how men big-riggers perpetuate sex trafficking. In one shot, Sally sees a line of young girls waiting to enter a man’s cabin. Oftentimes, “Paradise Highway” works best when gesturing to the inequities existing on the peripheries of Sally’s world, the ones even she’s chosen to ignore. These heady subjects could organically weave into a grittier milieu if only Gutto didn’t abandon the gloomier shades of this universe for an odd, homespun mother-daughter tale.

After a couple days on the road, Sally becomes a surrogate mom for Leila. To a girl trapped in the unforgivable world of trafficking, Sally’s existence represents freedom and connectivity to other women. While you never really believe a New Yorker like Grillo and a French actress such as Binoche as siblings, partly because neither of them drop their accents, you do buy the maternal relationship shared by Finley and Binoche. The picture would succeed just by focusing on this storyline; instead, Gutto opts to cram together three underwhelming narratives rather than living with one.

Even under trying circumstances, the craftsmanship intermittently pops through; cinematographer John Christian Rosenlund’s shadowy and sinister compositions attempt to instill some sense of tension. And almost none of the actors mail anything in, even when Gutto’s half-baked ending undermines them. But their best laid plans often go for naught, unfortunately, in this soporific thriller. 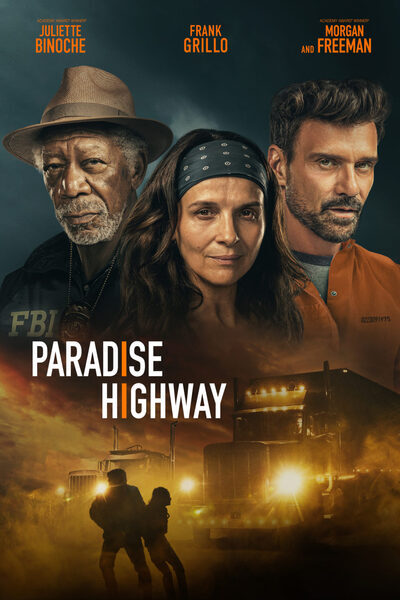 Rated R for language throughout and some violence.