When Steve McQueen and Dustin Hoffman made “Papillon” in 1973, they were near the peak of their popularity, and the result was a massive hit, making $53 million domestically (total, likely with re-releases, but still). Forty-five years later, a remake emerges from the brush with two stars who don’t have anywhere near the household name status of their predecessors—Charlie Hunnam and Rami Malek—but sometimes lowered expectations can be a blessing. Can these two actors, primarily known for their TV work, step into the gigantic shoes of two of the most beloved actors of all time?

Hunnam plays the title character, a charismatic criminal who we see briefly in Paris before he’s framed for the murder of a pimp. He is sentenced to a penal colony in French Guiana, surrounded by murderers and monsters, but he spots a lifeboat before he even gets there. While being transported to the hellhole to which he has been condemned, Papillon meets a counterfeiter named Dega (Malek), a nervous fellow still optimistic enough to believe that his wife’s appeals will lead to his release. The wealthiest prisoners in this system bring money into the colony in chambers that are held in their rectums, and Papillon correctly presumes Dega has one of those. Papillon needs Dega’s money to plan an escape—Dega needs Papillon’s protection from everyone else around them. It’s a perfect match of brawn and brain.

The conditions in the colony are brutal, including regular murders and assaults. And the warden lays down the rules to everyone on the first day: After your first escape attempt, you will be put in solitary confinement for two years; after your second, you’ll get five years alone before a transfer to the notorious Devil’s Island. Those who commit murder will be executed, via guillotine, in front of everyone. This is a place where hope dies, but “Papillon” makes it clear how much “Papi” and Dega inspired each other to survive. The director, Michael Noer, has claimed that his version, different from the books (which alleged to tell a highly-disputed true story) and the original film, is something of a “love story,” and it’s clear that his Papillon wouldn’t have made it without Dega.

The biggest problem, however, is that Dega is woefully underdeveloped. Malek employs a few too many character tics and never quite grounds the role in something that feels like more than a showy device until the film’s final scenes (when he almost seems to be playing a different person). Hunnam makes out much better, giving himself over to the physical demands of the role in impressive ways. It’s nowhere near the achievement of James Gray’s excellent “The Lost City of Z,” but it is remarkable how much Hunnam looks at home in a different time period, almost as if he’s an actor born a few generations too late. He would have been huge in the ‘30s. He's an actor I'm always rooting for to find better projects, underrated in things like "Lost City," "Crimson Peak," and "Sons of Anarchy," and it's a shame his really solid work here isn't for a film that deserves it.

For despite how much I liked about Hunnam’s work here, I could never completely engage with “Papillon” given how little it adds to the story that’s already been told and the overdone genre of humans surviving outright torture. If I’m going to spend time in solitary confinement with another man or watch people be abused and tortured, there needs to be a reason other than “it’s been long enough since the hit movie to remake it.” I could never quite figure out why this story was being told again, and I drifted away from its action way too often, losing interest in a 133-minute movie that feels much longer. I don’t usually quote Roger Ebert in my reviews—because I’m worried I’d never stop if I went down that slippery slope and I’m paid to express things in my own words and not my idol’s—but there’s really no better summary of this film than one of the lines from Roger’s review of the 1973 original: “You know something has gone wrong when you want the hero to escape simply so that the movie can be over.” At least that aspect of the original and the remake remains intact. 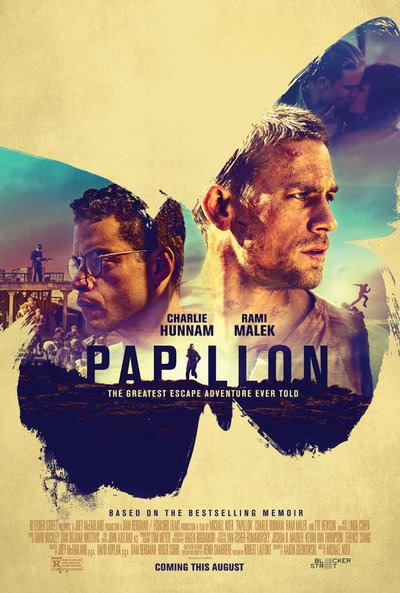 Rated R for violence including bloody images, language, nudity, and some sexual material.

Writer (based upon the 1973 screenplay "Papillon" by)

Writer (based upon the books "Papillon" and "Banco" by)