Netflix’s “Over the Moon” is the story of a girl who goes to the lunar surface and finds a Disney castle, a Disney princess, and even an Olaf character. I’m exaggerating, but not by much. This is a film that so blatantly cribs from other popular works that it never develops a personality of its own. Parts of it are tender and heartfelt, but "Over the Moon" mistakes hyperactivity for action in ways that are distracting and noisy, when there's no reason for it to be so. Netflix has quietly developed some interesting animated projects in the last year like “Klaus” and “The Willoughbys,” but they’re clearly not immune to animated misfires too.

Perhaps the Disney connection feels so blatant here because “Over the Moon” was directed by a key part of the Disney legacy. Glen Keane's resume dates back to character work on “The Rescuers,” and he was on the team for the renaissance that included “The Little Mermaid,” “Beauty and the Beast,” and “Aladdin.” (He also directed the Oscar-winning short “Dear Basketball”). He works here from a script by the late Audrey Wells (“The Hate U Give”), to whom the film is dedicated, and he brings a legacy of professional experience, but it almost feels like that history backfires on “Over the Moon.” Too much of this feels calculated to mimic something that worked before, lacking the spontaneity and artistry of great animation.

Fei Fei (Cathy Ang) is a girl who suffers the horrible grief of losing her mother at a young age. Four years later, her father (John Cho) has moved on and is considering marrying again, sending Fei Fei for a loop. She’s not yet processed the loss of her mother and now she’s being asked to welcome another woman into that role, along with an annoying potential stepbrother. Fei Fei panics and decides to basically explore her mother’s favorite legend about a moon goddess who is waiting there for the return of her lost love. She builds a rocket and takes off into the stars, sucked into a magical world of helpful dragons and bright creatures inspired by the Chinese tradition of the Moon or Mid-Autumn Festival. In visual terms, this is a space trip as imagined by someone on a bulk candy bender, splashed with more vibrant colors than we typically see on the gray orb.

When Fei Fei gets to the moon, she finds the legendary Chang’e (Phillipa Soo of “Hamilton” fame), but she’s not exactly welcoming. Insisting that Fei Fei must bring her a gift, our heroine is sent on a quest—find the mysterious gift, which will be exchanged for a photo to prove the existence of Chang'e. If Fei Fei can show that the legend of a woman who has waiting centuries for the return of her love is true than maybe dad wait a little bit longer to replace Fei Fei’s mother. A character named Gobi (Ken Jeong) ends up by Fei Fei’s side almost as if someone yelled “Give me an Olaf!” during a production meeting and this was the result.

For as long as children’s animation has existed, it has been used to confront how children process grief. It’s one of the greatest changes that a child can face, and the best family entertainment addresses it without talking down to young people. “Over the Moon” doesn’t exactly talk down, but it clutters its serious themes every chance it gets. The music is generally forgettable, though a song near the end that directly addresses loss is easily the most powerful in the film because it’s the first time the movie feels like it calms down and confronts what it should have been about instead of throwing flashy colors in pursuit of dull quest storytelling. There’s a tenderness in some of the beats near the conclusion that one wishes the rest of the movie leaned into instead of just hurtling itself through the stars.

It also doesn’t help that the visuals of “Over the Moon” are so polished and refined that it resembles a video game more than cinematic animation that stands the test of time. It’s rich with color but thin on actual detail. It's the vast difference between something that tries to numb kids with constant motion and something that trusts their young audience to meet them halfway. It’s naturally a little unfair to compare something to Studio Ghibli, but they’re a studio that has dealt with grief and princess mythology before, and have done so in a way that never disguises the humanity embedded in all of their work. That’s what’s missing here.

It can feel a bit curmudgeonly to come down on an animated musical about a girl grieving the loss her mother. Especially for families dealing with so much pain and grief in 2020, “Over the Moon” could be the kind of fable they need to help process what’s going unspoken in their lives. But the best fables linger in the heart and mind. This one never makes it past the eyes. 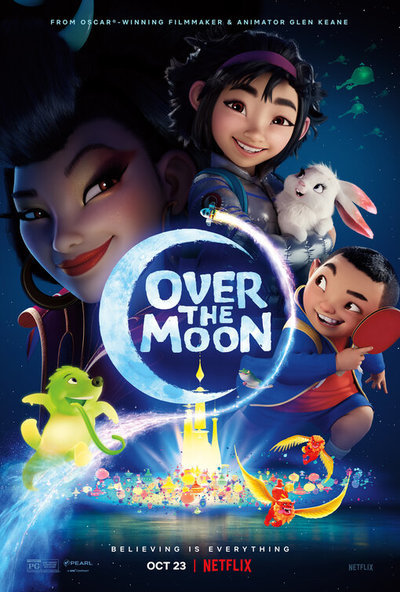 Rated PG for some thematic elements and mild action.