The goofy and charming "Klaus" probably plays better if you don't know going in that it's a Santa Claus origin story. That's almost inconceivable considering the tip-off title, the trailers, and, well, everything else about the project, but you take your pleasures where you can. Jason Schwartzman provides the voice of the hero, Jesper, the spoiled descendant of a politically powerful family. We first meet him as he's lounging at the Postal Academy in a vaguely defined European country, figuring he can slack off until he gets passed through and pushed into the world, where he'll coast on family money and connections.

Instead, as a last-ditch effort to make him care about, well, anything, the academy assigns Jesper to the remote island town of Smeerensburg, which hasn't sent or received mail in years, and that is riven by clannish civil war wherein citizens destroy each other's property in wild, ridiculous ways that evoke old Looney Tunes shorts. Narratively, the first part of this film is as familiar as the rest, but its silly ominousness is entrancing, and Schwartzman is appealing as the layabout Jesper, a soft, craven, but ultimately decent hustler who sounds like—and is somewhat drawn like—the hero voiced by David Spade in "The Emperor's New Groove."

Director/co-writer Sergio Pablos puts Jesper at the center of wild, humiliating bits of slapstick. These are inventively staged, and quite satisfying considering what a brat the character is. It's a treat to see a modern animated film that isn't afraid of absurd sight gags and bleakly funny lines of dialogue that have more in common with the work of Roald Dahl or Tex Avery than the typical big-studio animated feature that tries to put sensitivity upfront at all times. A girl the size of a Tolkien giant looms over Jesper like the Abominable Snowman that took Daffy Duck as a pet. A group of kids on sleds insult Jesper as they zoom over a hill, their hatefulness such an afterthought that even the hero seems confused by how to react. Arriving at Smeerensburg on a ferry, Jesper's jaw drops as he gazes at the island through curtains of slate-colored mist and sees a silhouetted whorl of decrepit buildings slumped atop jagged hills. It's a hope-draining panorama, devoid of color and suggesting a machine made of rotted fangs, directing the viewer's eye towards a pathetic circle of sunlight in the top part of the frame. "Charming, huh?" says the ferryman. "Well, you should see it in the spring."

Then, after pathetic efforts to convince somebody, anybody, to send a letter so that he can have an excuse to leave this awful place, Jesper meets a burly, bearded craftsman (J.K. Simmons) in a remote stretch of woods, and the origin story begins. Klaus is a quiet, frighteningly strong-looking hulk—initially presented as a monster, his face obscured or hidden— but he's a gentle soul and a gifted artist. Even though you can see where his story is going to end up (with the establishment of a toy factory and the acceptance of a mission), it's still pleasurable to watch him and Jesper build a bond that connects both of them to a world that they'd both held at arm's length, though for different reasons.

The look and sound and personality of "Klaus" are the main reasons to watch it. It's a fairy tale-inflected period piece that has a slightly different look and feel from the Pixar-DreamWorks-Blue Sky usual— essentially '90s Disney by way of 19th storybook illustrations and much older woodcuts. Pablos came up during the final years of Walt Disney's traditional, hand-drawn animation department, working on such blockbusters as "Tarzan," "The Hunchback of Notre Dame," and "Hercules." Even though "Klaus" was made digitally, you can feel the influence of that period. The images are intricately molded and shaded, and composed in a way that often mimics a lavishly budgeted, live-action Disney fantasy; but the film isn't knocking itself out to convince you that anything onscreen is "real," in the manner of recent Disney 3-D animated remakes like "The Lion King," or even "Toy Story 4," with its photorealistic roads, rain, and foliage. I doubt pens ever touched ink except at the concept stage, yet the whole thing feels sketched and painted by human hands, and both the landscapes and the characters' movements are more about realizing dramatic or comic notions than making you think anything in the story could "really happen."

The writing (by Pablos, Zach Lewis and Jim Mahoney) is less distinctive: a "selfish person learns to care about others" storyline; anachronistic dialogue packed with slang that'll be dated in a year, and moments where characters high-five each other, which I'm pretty sure wasn't common in the 19th century; a rather thin "strong woman" character who is mainly there to enable and reflect the hero's evolution (Rashida Jones' fishmarket butcher, who used to be a schoolteacher back when the citizenry cared about learning stuff). And of course there are occasional pop songs on the soundtrack, a practice that has become mandatory in animated features post-"Shrek."

But because the Pixar-DreamWorks-Blue Sky usual is the only kind of animation that's allowed into mainstream theaters right now, even a minor variation is so commercially poisonous for animators that "Klaus"—the umpteenth version of one of the most-retold stories in history, and a film that fits the marketplace template pretty well, all things considered—was reportedly hard to fund. It was finally made by Netflix, and (following a brief theatrical run) it will mainly be seen on TVs, laptops, and phones rather than on theater screens, where its most distinctive qualities are more likely to be appreciated.

There's a business story in all of this, and not one that will gladden young animators' hearts. I'm not a kid anymore, but I still might write a letter to Santa this year asking for the range of artistic possibilities for commercial animation to open up again, so that films like "Klaus"—and Laika animated features like "Coraline" and "Missing Link," and idiosyncratic imports like "A Cat in Paris" and "Funan"—won't be treated like troubling deviations from the norm. 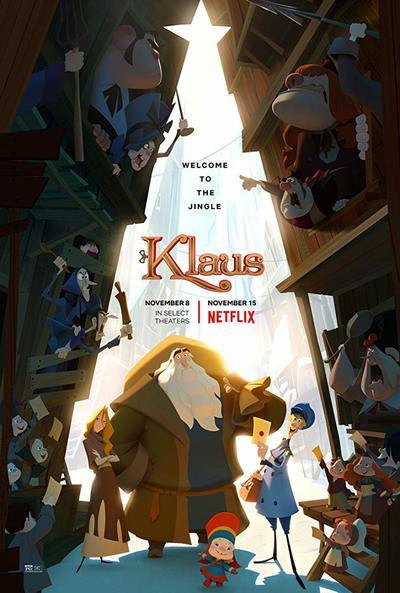