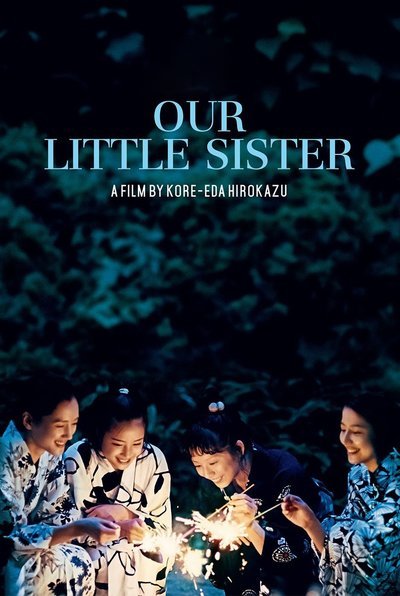 Japanese melodrama "Our Little Sister" is the rare film that captures the everyday pleasures and anguishes of family life. Adapted from Akimi Yoshida's serialized manga comic, writer/director Hirokazu Kore-eda focuses on three adult sisters who choose to adopt their teenage stepsister. These women are not psychoanalyzed, nor are their lives reduced to their romantic entanglements. Instead, Kore-eda ("Like Father, Like Son," "Still Walking") presents the lives of his heroines as unsensational, defined by small gestures. "Our Little Sister" is, in that sense, slower than most family dramas since it's less reliant on contrived plot twists and bombastic confrontations. Instead, Kore-eda represents four optimistic women enjoying each other's company, trying to find romance, eating good food and mourning the loss of friends and loved ones. I can't think of another recent domestic drama that is simultaneously so optimistic and so melancholic.

"Our Little Sister" doesn't have much of a traditional plot. Rather, the film breaks down into a series of vignettes about older sister Sachi (Haruka Ayase), and her siblings. That may sound deadly dull, but what's most surprising about Kore-eda's approach is how easy it is to get into a film where not a lot happens. Still, if you're looking for a traditional narrative, be forewarned: several of the most eventful plot points take place during the first 15 minutes. Sachi and her sisters live together in the seaside village of Kamakura. When their father dies, they meet stepsister Suzu (Suzu Hirose) at the funeral service.

Sachi intuitively guesses that Suzu needs a change of scene, based on the selfish behavior of Suzu's mother. So they offer to take Suzu with them in a quietly affecting scene that evokes the bittersweet feeling you get when you part with loved ones, despite knowing you'll be together again very soon. Here's where the influence of master dramatist Yasujiro Ozu ("Tokyo Story," "Late Spring") is most apparent. Like Ozu, Kore-eda focuses on simple moments of heartbreaking melancholy and swoon-worthy happiness. So if you look at the scene where Sachi and her sisters invite Suzu to live with them, you'll immediately notice how spare, and deceptively uncomplicated the scene is.

Suzu looks up at her adult relatives as they, talking as a united front, excitedly offer Suzu a new place to live. Suzu is quiet after the offer, prompting Sachi to add that she doesn't expect an immediate reply. But Suzu wants to go: "I'll come!" At that moment, the doors separating the two groups snap shut, and Sachi's train starts to leave the station. The sight of Suzu as she chases the train, waving at her relatives, is over in an instant. But that moment is full of potent mixed feelings, the kind that linger with you into the next scene because of how direct and tranquil the preceding scene is.

"Our Little Sister" can be seen as a throwback to Ozu's still-modern style of drama. You can tell so much about the little heartaches and happiness of Ozu's characters from little gestures, and the same is true of Kore-eda's film. Characters don't quarrel, though their estrangement from extended family and friends is sometimes the source of subtle tension. Instead, they learn that their favorite restaurant may be going out of business, or relish the taste of whitebait fish toast. Sometimes, well-meaning characters speak out of turn, or bad news is delivered suddenly. And the next scene begins, and you realize that all of these little faux pas and announcements of impending sadness aren't driving the film's plot. Rather, "Our Little Sister" either floats along on the way characters universally carry on through good and bad times without complaint. In one scene, Sachi wins over an estranged aunt with homemade plum wine, a gift that causes her relative to fondly remember happier days. In another, Suzu enjoys the warmth of the sun, and the shade of white cherry blossoms during a rapturous bike ride with a boy friend who isn't her boyfriend. These snapshots are unostentatiously powerful. They transpire and end in a flash, leaving viewers overwhelmed with unexamined emotions.

Kore-eda doesn't broadcast how you're supposed to feel about his protagonist's actions beyond a point. Protagonists are never overshadowed by their need to make themselves happy, or allow themselves to transcend a defining woe or concern. "Our Little Sister" is more delicate than Kore-eda's other recent Ozu-inspired melodramas. That doesn't mean it's either better or worse than those films. But "Our Little Sister"'s deceptive air of lightness is a remarkable source of of small-scale joy and sadness. This is the kind of movie that encourages viewers to slow down and take stock of their lives' defining little moments. Here's hoping it finds a receptive American audience.