Our Brand is Crisis

It might be possible to make a good movie out of a cross between Mike Nichols’ “Primary Colors” and Costa-Gavras’ “Z,” but “Our Brand Is Crisis,” directed by David Gordon Green in a seeming attempt to do something along those lines, is not that movie. Written by Peter Straughan, and according to its credits “inspired” by the 2005 documentary film of the same name, “Our Brand is Crisis” uneasily mixes the star vehicle with the screwball-political-comedy/satire with the (half-heartedly, in the end) impassioned call to social consciousness arms. Though not without its entertaining moments—the cast, led by Sandra Bullock, is energetic, sharp and gets a fair number of juicy bits to rock out with. But as a whole, "Our Brand is Crisis" is a messy affair that sputters along when it should be humming with assured cynical momentum.

It begins poorly, with an odd montage intercut to stagey “interview” footage in which Bullock’s character, “Calamity” Jane Bodine, formulates an apologia for we-don’t-quite-know-what. Her words are intercut with footage of newspaper headlines and, oddly, shots of Bullock’s hands molding clay at a pottery wheel. Underneath it all plays Ten Years After’s “I’d Love To Change The World,” the absolute nadir of Woodstock-era protest rock; the movie’s sound editor deserves some kind of award for smoothly deleting the song’s opening volley against “dykes and fairies.”

The pottery business is explained forthwith, lest we’re worried about some “Ghost” influence. After a traumatizing career as a political campaign consultant, Bodine has retired to the snowy mountains, where she doesn’t smoke and makes bowls. Old colleague Nell (Ann Dowd) brings young idealistic Ben (Anthony Mackie) up to the woods to coax Jane down to Bolivia, to manage the presidential campaign of a conservative senator whose prior stint as head of that country was pretty … authoritarian. The news that Jane will be pitted against political consultant Pat Candy, with whom she has a past, is enough to get her away from the wheel. But once in Bolivia, she’s sidelined by acute altitude sickness (the flight down is accompanied by a primer on the geography and general stressed disposition of the place), and hence unable to immediately show her Sun-Tzu-informed genius to uptight candidate Castillo (Joaquim de Almeida). At least not right away. Initially under the impression that her man is a dud, Jane is soon animated by Castillo’s spontaneous response to getting egged (that is, he decks the egger) and her personal animus against Candy.

Candy’s played by Billy Bob Thornton, and his serpentine southern charm and minimalist tonsorial stylings suggest real-life political maven James Carville (and it is perhaps no accident that Thornton played a deep-fried political strategist in “Primary Colors,” too) … who was in the aforementioned documentary. But there’s no real fun in determining the extent to which this movie is some sort of a clef exposé. The real meat of the comedy, and drama, comes in the ingenious dirty tricks that Candy and Bodine play on each other, which could kick off a primer on the political practice recently known as “rat-f**king” (although that phrase is never uttered in the film). When Bullock’s passionately advocating goes negative, or Thornton’s smirkingly plays Mephistopheles to her from across their hotel balcony—they’re close enough to speak to each other directly, but insist on staying on their cell phones—the movie builds up an infectious energy. But it never keeps the energy up, steering into forced visual gags, dull spells of earnestness, and ponderous backstory psychology—the viewer never is quite sure who really did what to whom in the Candy-Bodine love-hate relationship.

The insistent, intrusive music score by David Wingo doesn’t help matters, and neither do the too-many subsequent montages, all of which are of the always mistaken “We Need A Montage” variety. What’s ultimately most frustrating is the evidence that the makers of this movie were fully capable of creating something as smart and ruthless as its lead character. They just decided to be ingratiating and sentimental. 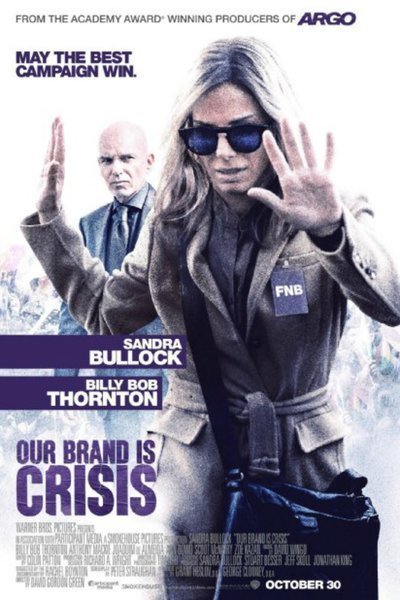