Only When I Laugh

Neil Simon's “Only When I Laugh” is basically a movie about a woman who is recovering from alcoholism, although the film also provides us with a lonely homosexual, a disturbed teenager, a fortyish woman losing her husband, and a “Looking for Mr. Goodbar” scene in which protagonist Marsha Mason is assaulted and raped. It comes billed as one of Neil Simon's "serious" films. That means that it is about serious subjects. It does not mean Simon examines them seriously. The film should have contained half so many problems if he hoped to provide us with insights into them. But Simon uses misfortunes as a way of creating characters. If he can create an "alcoholic," then he doesn't have to create a three-dimensional person for his film. He can just fill out the person's life with predictable crises from the disease. The same with the film's homosexual, who can complain of loneliness, rejection, feelings of inadequacy, can do everything, indeed, except be gay onscreen.

There are times, as a result, when “Only When I Laugh” seems like a series of characters reporting to headquarters. Many of the big moments take place offscreen, and then the movie stars turn up onscreen to tell us about them. Maybe that is not so bad. In the scenes where Simon does try to grapple with his film's issues, he exhibits little understanding. Take, for example, the business of his central character's alcoholism. The movie's heroine, played by Simon's wife, Marsha Mason, is an actress who is just being released from a rehabilitation program when the movie opens. The doctor congratulates her on her wonderful progress. Then she hits the streets, where her entire program for maintaining sobriety seems to consist of (a) keeping up a brave front, (b) looking noble, (c) wallowing in self-pity with the encouragement of her neurotic friends, (d) quickly walking past bars, and (e) gulping a drink the moment things start to go wrong.

No wonder she gets drunk again. That's predictable, but couldn't Simon have spared us a lapse scene reminiscent of “The Fatal Glass of Beer?” At one point, a glass of wine looms so menacingly on a piano top in the foreground that we think this is a Hitchcock film and that the booze must be poisoned. (In other shots in the same scene, the continuity is so sloppy that the glass disappears from the piano, but never mind.) Simon and Mason must not drink, know little about drinking, and less about how to stop drinking. If Simon had cared enough to look into the subject, he might, given his undeniable comic gifts, have been inspired to write some really good stuff about the joys and pitfalls of sobriety. (Can you imagine a Neil Simon version of an AA meeting?)

But Simon's not that interested in any of the problems he hauls onscreen in “Only When I Laugh.” He'll settle for maudlin mother-daughter confrontations, cozy, clichéd scenes of "understanding" between Mason and her gay friend (James Coco), and histrionics from another friend (Joan Hackett) who comes undone upon turning forty. The only genuine moments amid the phony landscapes of this film come from Kristy McNichol, who turns in a wonderful performance as Mason's daughter. McNichol carries conviction. She suggests the real passions and hurts that her character must feel. The other people in the movie seem to be drawn from superficial medical advice columns, advice for the lovelorn, and the character insights of popular songs. Anyone consulting this movie for insights into alcoholism would be better off asking a bartender. 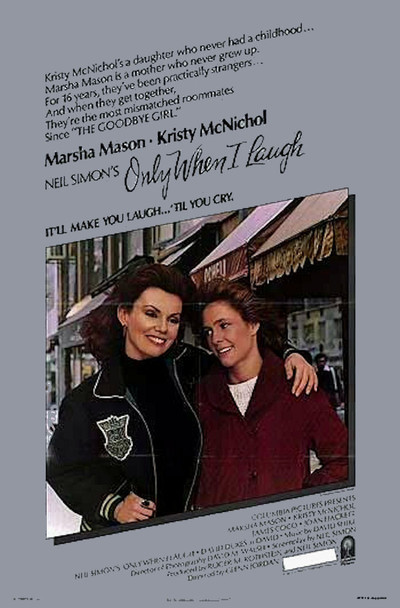