“Only the Brave” is the latest in a string of reality-based disaster films in which horrible tragedies are brought back to life via special effects and offered up for the delectation of the multiplex crowds—a sub-genre that has become so prevalent as of late that Mark Wahlberg has pretty much made a personal cottage industry out of them. This is a type of filmmaking I have always felt a certain level of ambivalence towards because good intentions can’t hide their tendency to feel hollow and exploitative in nature. “Only the Brave,” which chronicles an Arizona firefighting crew known as the Granite Mountain Hotshots from their early days struggling to get certified to their tragic encounter with the Yarnell Hill fire, has been made with a combination of sincerity and technical skill that is effective on a fundamental level, even if it never quite becomes the devastating emotional experience that it clearly wants to be.

“Hotshots,” the film explains upfront, are an elite group of forest firefighters who are specially trained and certified to go into on-fire areas and establish a controlled fire line that the approaching inferno cannot cross. As the story begins, a team from the small town of Prescott, Arizona, under the leadership of chief Eric Marsh (Josh Brolin) is trying to get certified, a feat that would make them the country’s first municipal hotshot squad. For now, they are merely part of the second wave that has to look on while the hotshots get to do all the real work, even if they have a better idea of the terrain and how the fire might turn in an instant than the top dogs. Eventually, local wildland division chief Duane Steinbrink (Jeff Bridges) gets them in position to finally get an official evaluation. As the group begins to train for this, they take on a new recruit in Brendan McDonough (Miles Teller), a local screw-up who decides to finally get off drugs and become responsible after learning that his ex-girlfriend is pregnant. To take Brendan on at this time seems like an enormous mistake, as fellow firefighter Christopher McKenzie (Taylor Kitsch) is constantly reminding him, but Marsh sees something in McDonough that inspires him to take that risk.

Ironically, it is Marsh who almost blows it for the group during their evaluation when he elects to utilize a risky maneuver to combat a fire. Nevertheless, the group is officially certified at last and the newly dubbed Granite Mountain Hotshots quickly establish themselves in a series of fires, even becoming local heroes when they help save a cherished tree from a nearby blaze. However, the dangers of the job, not to mention the extended periods of time they are away from their families, do begin to take a toll. For McDonough, who has fully pulled himself together in order to establish a relationship with his baby daughter, he fears that the absences will turn him into the never-there father that he had and vowed that he would never become. As for Marsh, the new job pressures cause additional stress between him and his wife, Amanda (Jennifer Connelly), who knew what she was getting into when she first married him but is no longer thrilled with him devoting so much of his life to his job and so little to her.

Although one might think that the Yarnell Hill blaze and its aftermath might dominate the proceedings, “Only the Brave” spends the majority of its time showing how the crew grows and develops, both professionally and personally, with special emphasis on the lives of Marsh and McDonough. This is not necessarily a bad approach to take but it does lead to some clunkiness in the early going due to a screenplay by Ken Nolan and Eric Warren Singer that has to deal with a mass of exposition involving the details of what a hotshot crew actually does and the group’s internal politics. One of the reasons that a film like “Black Hawk Down,” on which Nolan served as screenwriter, works so well is that it was able to establish all of its myriad elements in a clean and effective manner. Here, the script does a good job of letting us know what the hotshots do and the danger and importance of their actions but the other stuff doesn’t quite come off. The various conflicts involving the struggles to get certified are never clearly established and when they do finally accomplish that goal, it doesn’t really have much of an impact. Another problem is that while the screenplay takes time to fully establish the lives of Marsh and McDonough, the other members of the crew are largely given short shrift with many of them only getting to deliver an incidental line or two and fill up the numerous shots of the crew sitting on hills and mountain ledges in casually heroic poses.

Once the crew is certified, however, the screenplay settles down to show them at work in a series of undeniably effective sequences of them rushing into enormous conflagrations that director Joseph Kosinski stages in ways that are visually spectacular and increasingly tense without going too far overboard in the effects department. Out of the flames, the personal issues of Marsh and McDonough are handled in a direct and relatively non-maudlin manner. There are also a number of good performances to be had from the large ensemble cast with Brolin and Connelly standing out for the way that they take their potentially cliched characters—the gruff guy in charge and the wife left back home to worry about whether she will ever see her husband again—and invest them with real life and personality. Best of all is Jeff Bridges, who finally sheds the blend of Yosemite Sam and Anthony Hopkins in his later scenes in “Legends of the Fall” that has been his default setting for a while now and delivers his most effective performance in recent memory—there is one brief moment when his character reacts to some very bad news he has just heard over the phone that may well be one of the most powerful things that he has ever done.

Despite its early unevenness, “Only the Brave” tells its story in a sincere and relatively non-exploitative manner that isn’t overly dominated by visual effects, and the cast does some very good work as well. Whether anyone will actually want to pay money to see it, especially in the wake of the devastating wildfires that are currently decimating Northern California, remains to be seen, but those that do should come away from it feeling moved, if not exactly entertained.

To the Ends of the Earth 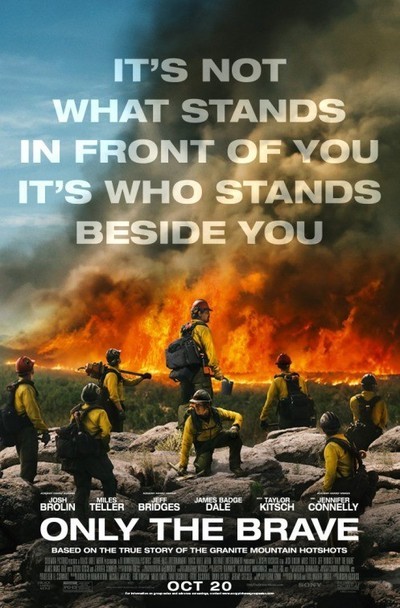 Writer (based on the GQ article "No Exit" by)