One From the Heart

Arriving after two years of sound and fury, after all the news items on the financial pages and alarms and excursions in the movie trade press, Francis Ford Coppola's “One From The Heart” is an interesting production but not a good movie. From Coppola, the brilliant orchestrator of “Apocalypse Now” and the “Godfather” films, it is a major disappointment. This must be the first movie in history to arrive with more publicity about its production techniques than about its stars. Everybody knows that Coppola used experimental video equipment to view and edit his movie, sealing himself into a trailer jammed with electronic gear so that he could see on TV what the camera operator was seeing through the lens. Of course the film itself was photographed on the same old celluloid that the movies have been using forever; Coppola used TV primarily as a device to speed up the process of viewing each shot and trying out various editing combinations. (Or, as an industry wisecrack had it, "He took an $8 million project and used the latest advances in video to bring it in for $23 million.")

If “One From The Heart” is the sort of film this process inspires, then Coppola should abandon it. But of course the process is neutral; films live or die according to an inner rhythm of their own. The most dismal thing about “One From The Heart” is that it lacks those rhythms. It is a ballet of graceful and complex camera movements occupying magnificent sets, and somehow the characters get lost in the process. There was never a moment in this film when I cared about what was happening to the people in it, and only one moment (a cameo by Allen Goorwitz as an irate restaurant owner) when I felt that an actor's spontaneity was able to sneak past Coppola's smothering style and into the audience.

The storyteller of “The Godfather” has become a technician here. There are chilling parallels between Coppola's obsessive control of this film and the character of Harry Caul, the wiretapper in Coppola's “The Conversation”(1974), who cared only about technical results and refused to let himself think about human consequences. Movies are a lot of different things, but most of the best ones are about people and for people, and “One From The Heart” pays little heed to the complexities of the human heart. Indeed, it seems almost on guard against the actors who occupy its carefully architectured scenes. They are hardly ever allowed to dominate. They are figures in a larger pattern, one that diminishes them, that sees them as part of the furniture. They aren't given many close-ups; they're often bathed in garish red glows or sickly blues and greens; they're placed in front of distractingly flamboyant sets or lost in badly choreographed crowds; and sometimes they're cut off in the middle of an emotion or a piece of business because the relentlessly programmed camera has business elsewhere.

I've neglected, in fact, to name the actors, or describe the characters they play. That's not so much of an oversight in a review of a film like this. The two main characters (Teri Garr and Frederic Forrest) inhabit a Las Vegas of disappointment, ennui, and glittering lights. For a brief time, they break out of their humdrum lives and meet new lovers (Raul Julia and Nastassja Kinski) who tease them with dreams and fantasies. The underlying story notion, I suppose, is that ordinary little people have a great night on the town, but the night and the town in Coppola's production so overwhelm them that they remain ordinary little people throughout.

There are small pleasures in this movie. One is Harry Dean Stanton's walk-through as the seedy owner of a junkyard, although Coppola resists showing us Stanton's most effective tool, his expressive eyes. Kinski, as a circus tightrope walker, has a beauty much more mature than in “Tess” and a wonderful moment when she explains "to make a circus girl disappear, all you have to do is blink your eyes." Garr is winsome, but her role makes her thanklessly passive, and Forrest (the Oscar nominee from “The Rose”) is almost transparent here, he's given such a nebbish to play. 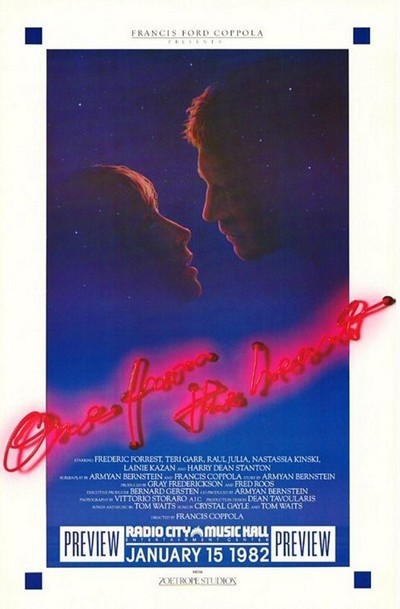