On the Silver Globe

"The most merciful thing in the world … is the inability of the human mind to correlate all its contents."
- H.P. Lovecraft

"On The Silver Globe," now playing in a jaw-dropping and necessary restoration at Lincoln Center, concerns no less a subject than the beginning of civilization, the foundation of religion and man's fundamental violence. Its science fiction scenario is well worn: astronauts land on a foreign planet and, with no means of getting home, accidentally create a new human race from scratch and become mythic figures, like gods, in their lifetimes. Andrzej Żuławski, the mad genius behind this lunatic "Birth of a Nation," was forever changed by the experience of making it and having it halted in its tracks by authorities. There's a very good chance you too will be altered in some small but crucial way after witnessing its boundless innovation.

The first 'act' is Żuławski's "Rite of Spring," a gonzo creation myth. A brutal tribe of hunters finds an artifact, which they believe has fallen from the sky, and bring it to two scientists to trade for drugs. The two men discover that the fallen object is a sort of film, a record of a failed mission to another planet with breathable air that was meant to be a replacement Earth. Earth itself has fallen into decay and people go through the motions of capitalist indulgence, imprisoned by outdated social customs, because they can't come up with a new way of life. Of course, the mission to find a new home goes terribly awry.

Only three astronauts, Marta, Piotr and Jerzy, survived the landing on the new world, and filmed their misbegotten trip with body cameras. They make their way through miles of rough terrain to the ocean and dig themselves out a place to live on the beach. Marta, pregnant by one of the casualties of their spaceship crash, has a son who ages twice as rapidly as he would have on Earth. Piotr is killed in a raid by a phantom enemy and Marta dies in childbirth, leaving Jerzy and his rationalism the only sane force in a world that comes to view him as an intruder. Marta's son grows to manhood and impregnates her three daughters—two by Piotr, one by Jerzy—and soon there is a functioning feudal tribe that views Jerzy as a kind of wizard, full of knowledge that could be dangerous. Aged to decrepitude, he retreats to the damaged spacecraft that brought him to the new world, and sends his transmissions back to Earth.

The second act concerns Marek, the next man to make it to this sister planet. He comes down from the same mountain Jerzy retreated into hundreds of years ago. A group of fanatics has been watching the foot of the mountain the whole time, believing that their savior would return from the same place to which Jerzy escaped. Marek is treated like a god by the squabbling civilization that has bloomed since Jerzy's death. He is put in charge of a military operation to crush their enemies, telepathic birdmen called Sherns, who have mated with their women to create half-bird soldiers. Marek is little more than a pawn in a series of games, this bloody reformation only the loudest. While he's off conquering the Shern city, Żuławski takes us back to Earth, where we learn the only reason Marek was sent to this distant star in the first place was because his girlfriend, an actress, was sleeping with a fellow officer and they wanted to get rid of him to continue their affair. In the final act, they must live with each other knowing they sent Marek to possibly die a million miles from anything he knows or loves, while Marek grows into a sort of Christ/Buddha figure who is flooded with information about existence and sees that he is not in control of his own destiny. He learns too late that the political systems he's been aiding and destroying have minds of their own. The exceptionalism of the human being is as much a myth as his arrival from the mountain.

"On The Silver Globe" is not only one of the greatest science and moral fiction movies ever made, it also presents a rare entropic quandary. After his damning second feature "The Devil" equated the Polish government to an imp whispering vile conspiracy in the ear of a shell-shocked prisoner, director Żuławski was cordially invited to get the hell out of Poland and never come back. His permanent exile wasn't to be. When his next film, 1975's French-funded "That Most Important Thing: Love" performed well abroad, the cultural authorities waved a white flag and let the prodigal back in their borders. He knew exactly what he was going to do when he got back home.

He set about adapting his great uncle Jerzy's sci-fi novels, "The Lunar Trilogy," some of the most celebrated and influential European cult tomes ever written. It took him two years to write the script and have it meet the strict dictums set forth by the cultural ministry, and the shoot itself was no picnic. In 1977, with four-fifths of his film complete, Żuławski's production was shut down by Vice Minister of cultural affairs Janusz Wilhelmi and he was kicked out of Poland for a second time. Seems Wilhelmi didn't dig the screenplay's equating state and religious authority, nor its insistence that both are corruptible constructs (caves figure heavily into the action, students of philosophy). The really interesting part comes next. Żuławski rebounded with the deeply wounded and wounding paranoid divorce drama "Possession," which led him down a path of similarly abrasive psychodramas about men in thrall to women—stand-ins for his artistic obsessions—and the political obstacles to their romantic unions. Most conclude with physical and mental breakdowns and murder. In the late '80s, with three such films of shrieking skullduggery under his belt, the former enfant terrible returned to what might have been his masterpiece and put as much of it together as he could, filling in the missing plot points with narration laid over footage of modern Poland. The patchwork "On The Silver Globe" debuted at Cannes in 1988 and has been haunting viewers ever since.

Żuławski, apparently on the wavelength he rode while making this outlandish masterpiece once again, followed it up with an adaptation of Modest Mussorgsky's "Boris Godunov," a stylistic sequel. Both films share an interplay between impossible color and thick, Dutch monochrome, musical invention, a historical-philosophical bedrock, and especially cinematography, which goes tear-assing through scenes of sybaritic suffering as if strapped to a Plymouth Hemi 'Cuda. If just reassembling the film primed him to make "Boris Godunov," what might he have done if he'd been allowed to finish the film in '77? It would have predicted the entirety of the 1980s dystopian trend. Everything & everyone from "The Road Warrior" to Paul Verhoeven, "Cannibal Holocaust" to Piotr Szulkin, Ridley Scott to Terry Gilliam, all appear to owe it a debt, but no one who looks like they might have been influenced by its madcap secrets could have seen a frame of the film until after the vogue for post-apocalyptic yarns had morphed into the cyberpunk trend of the 1990s. Together the two strands, personal and communal, form a tantalizing piece of cinephile string theory. What if this post-punk j'accuse had escaped into the blood stream of the filmgoing public in 1977? Would he have finished adapting the trilogy?

Looking at the restored images and hearing the renewed soundtrack of the newly restored print one can at least imagine how audiences must have felt seeing it for the first time. The film existed for years as an oppressively colorblind dirty secret; the DVD transfer looked like something smuggled out of Poland in the guts of a political prisoner. Now it's as complete and luscious as it could ever be and for that we should all be thankful. Its fusion of the primal and the futuristic is still a shocking design to behold, as is its proto-found footage first act, picking up where Godard left off and predicting every horrific depiction of "reality" as given to us by amateur cameramen gleefully filming the deaths of their friends in movies like the aforementioned "Cannibal Holocaust," "Cloverfield" and "Apollo 18." The astronaut's heartbreaking failure to create sense and order in a temporarily godless universe mirrors the found footage trope of filming one's own death.

Just as his heroes throw their hands and faces toward the sky, hoping for information from the infinite to render their plight if not understandable than at least heroic, Żuławski was after a new, more honest form of filmmaking. His mix of earthy DIY production design (the film is full of fright wigs, face paint, abandoned buildings, primitive gore effects, and jerry-rigged space-age technology) and wailing philosophical inquiry (a hoarse interrogation of the universe's meaninglessness) unearths one awful truth after another about the prioritization of our baser instincts. Is the love of the astronaut and the actress any more or less important than Marek's attempts to bridge a gap between the Sherns and the subhumans to whom he acts as a god? Could there ever be any chance of restarting the human race and not arriving at our embattled, ignorant worst? Are war, rape, treachery and torture ingrained in the human brain the way turtles always crawl to the sea at birth? Could we ever hope to isolate and best the immemorial strand of our genetic code that leads us into ruin?

In his typically acidic way, Żuławski has answered in the affirmative. It's in the way Andrzej Korzyński's score exorcises the simple longing behind the most complex ideas and images; it's in the way he trusts the audience's imagination to fill in the missing pieces of his narrative. He needs us to complete his film. Even if he accuses humans of having "murdered" his film and fills his movie with one horrific crime after another, he knows that only we can bring it back to life. Marek and Jerzy may suffer for trying to mold a new human race in their image, to untangle our best and worst instincts and learn everything about existence, but Żuławski made a living at it, and left us this most important text as a legend. Even out of time, even incomplete, even now that its director is gone for good, "On The Silver Globe" endures and its beautiful power will never dim. Should anyone ever want to understand how this mess we call modern life came to be, one could do worse than to watch this movie. More simply, as my fellow RogerEbert.com writer Glenn Kenny said to me when the credits started to roll at the press screening, "It's everything, isn't it?" And then some. 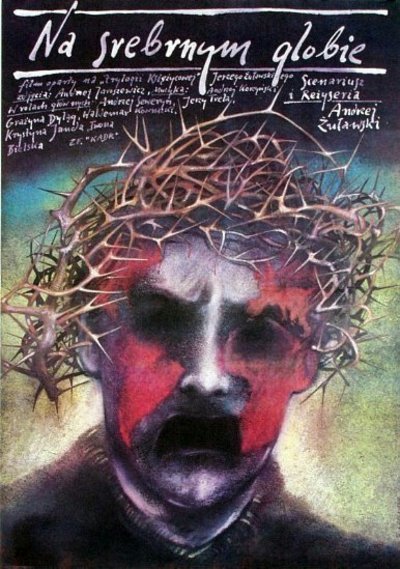