First things first: this movie needed another half hour. There’s no other way to explain the peculiar absence with which it leaves you. More time would make this soufflé of a movie even richer. But, if you can look beyond the 90-minute runtime depriving this movie of a more satisfying conclusion, there is not simply “a lot to like,” there’s an embarrassment of riches crying out for perusal. “On the Rocks” is the kind of doodle only a truly skilled director could produce.

Laura (Rashida Jones) thinks Dean (Marlon Wayans) is cheating on her, despite the fact they have two kids together. The idea so preoccupies Laura that she’s become something of a shell. She can’t write her book, she’s not much of an active listener to her friend Vanessa (Jenny Slate), and everything reads like culpability when she sees Dean amongst his co-workers. Something about the way associate Fiona (Jessica Henwick) holds onto Dean’s arm just rubs her the wrong way. Add that to Dean’s workaholism and general distance from the responsibilities of being a husband and she’s in a full-blown crisis. The last thing she needs is her emotionally distant reprobate father Felix (Bill Murray) getting involved, but that’s exactly what he’s gonna do.

There’s a scene at about the midway point where Laura and Felix tail Dean through lower Manhattan and they get pulled over by a cop. Murray’s hellcat manages to convince the arresting officer that he knew his father long enough to not only get out of a ticket but get the cop and his partner to give them a jump in starting the antique Italian sports car he’s driving for the evening. This, we can’t help but imagine, is how it must feel to be Sofia Coppola at a film festival. You can’t even get pulled over without a cop offering to give you a lift. Your dad made “Apocalypse Now” and “The Godfather,” of course they want to help.

Coppola’s made a couple of films about her complicated relationship to the real world and the famous men who tend to set its boundaries (2003’s “Lost in Translation,” 2010’s “Somewhere”), but this is the first one that finds her small enough to admit her place in it happens to be in the shadow of the guy who helped coin cinematic grammar as we know it. It’s a remarkably vulnerable thing to do this far into a career all about debunking legends and iconoclastic gestures, and it’s one of the many empathetic pleasures to be found in this frequently heartbreaking film.

“On the Rocks” plays like a hardwired Italian comedy, from the silly surveillance job Murray and Jones pull on Wayans to the quick jag to a gorgeous resort in the third act. This is a film that pulls towards awkward and silly humanity like an old roadster nosing towards the shoulder. Murray, with his voice finally betraying his age, has an immaculate wardrobe that cuts a figure like some ur-Fellini gentleman scoundrel. We remember how his renaissance began, working with Coppola’s cousin Jason Schwartzman in “Rushmore” and then for the director herself in “Lost in Translation” and the more charming than it ought be “A Very Murray Christmas.” And, thanks to Coppola’s use of Michael Nyman’s “In Re Don Giovanni,” a cut from Peter Greenaway’s “The Falls,” which predicted all of American independent cinema, we see Coppola trying to cobble together a kind of roadmap through her very Italian American heritage and relationship to the cinema, a place of spoiled aristocrats and mad kings. It’s as if she whipped a meringue from 50 or 60 pages from a cinema history textbook.

There’s so much to love about “On the Rocks” that it’s rather easy to overlook the ending that doesn’t seem to meaningfully abate its narrative concerns. We leave the film convinced of something the movie won’t fess up to, but ultimately that may itself be the point of this deceptively frothy exercise. Coppola may not have found tragedy in her study of a marriage and a family in need of defibrillation, but she made Manhattan look like Rome, she made her life look like an Alberto Sordi comedy, and she made her life into the genuinely mythic thing it is by reckoning with it. I don’t usually come to Coppola for tidiness, for adorable antics, for a quick look inside the guts of the American cinema and its place on the world stage, but “On the Rocks” is all that and more. In fact, throw in her Yasujiro Ozu-esque flaunting of the 180-degree rule and it’s almost everything.

When someone finds a cure for the Coronavirus I’m going to move out of New York. When I go, I’ll be leaving behind more than my Queens apartment and most of the critics you read. I’ll be leaving behind a place of myth and legend, a kingdom of charm and stone. “On the Rocks” shows New York as it is, a place where dreams don’t come true. Some days, there’s no place in the world you’d rather be. A place where your ordinary life looks like a Greek tragedy and an Italian comedy, a place where we write our own stories when fate fails to provide. I’ll miss you, New York. I’ll miss you.

This review was filed in conjunction with the world premiere at the New York Film Festival. The film will open limited theatrically on October 2nd and be on Apple TV Plus on October 23rd. 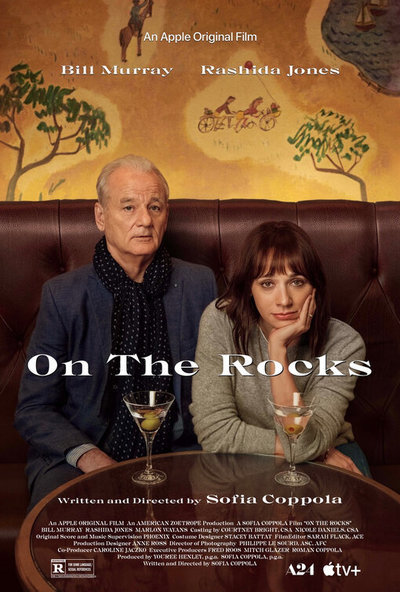 Rated R for some language/sexual references.