Satire has such a curious way of catching up with itself. Just a few short years ago, Chevy Chase was on "Saturday Night Live," that sworn enemy of our national tendency toward the smarmy. Now Chevy Chase is playing Benji in a movie. Among the great-unrecorded conversations in Hollywood history, we must now include the one in which Chevy Chase's agent convinced him that playing Benji would be the right career move.

The conversation itself could no doubt have played on "Saturday Night Live," and there'd also be endless possibilities for the ads: You'll believe a man can bark! Just when we thought it was safe to go back into the pond!

"Oh Heavenly Dog" is not, alas, anywhere near as funny as the thoughts it inspires. It's a total miscalculation from beginning to end, inspired by an idiotic decision to increase the average age of the Benji audience by starring him in a movie rated PG. Let's face it. Movie audiences have a certain set of expectations for any movie starring a trained dog, and no mere PG rating is going to inspire hopes for greater wit, sophistication and maturity. There is only so much you can do with a dog.

And "Oh Heavenly Dog" does most of it. In this movie, you'll see Benji dial a telephone, open drawers, go through files, jump into cars, snuggle up to a beautiful girl, jump into her bubble bath and (oh, you PG!) bury his wet, black little nose in her cleavage. The possibilities for Benji in an R-rating movie are too depressing to consider.

The movie's plot crossbreeds the original Benji formula with a whodunit murder mystery and several scenes inspired by "Heaven Can Wait." The film begins with Chevy Chase in human form, as a London private eye who's called in on a new case. He makes a house call, discovers a corpse, and is immediately stabbed in the back by a mysterious stranger.

The stabbing scene incorporates a movie device I detest: We only see the shoes, pants, coat, etc., of the killer, as he stabs our hero. Since the camera could obviously show us his identity but doesn't, we're being set up for a cheap, dumb revelation scene in the end. Since the thriller genre depends absolutely on the solution of mysteries set up early in the story, it's infuriating to get shots suggesting that the camera knows who did it, but isn't telling.

Anyway. Chevy Chase dies, goes to heaven and is processed by a Mr. Higgins, who informs him that he can redeem his sinful record on Earth by going back and solving the original murder. The only catch is, he'll have to go back as a dog. So the movie continues with Benji bouncing around while his thoughts are spoken on the sound track in Chevy Chase's voice.

This premise could have been fun if the filmmakers had used imagination in exploring the fantasy of a man in a dog's body: The whole problem of surviving in an out-scale environment has been shown entertainingly in movies such as "The Incredible Shrinking Man." But no. Benji is such a cute little tyke that realities aren't allowed to intrude, and "Oh Heavenly Dog" becomes another one of those insufferable movies in which the plot grinds to a dead halt while the trained dog does his tricks. You know: A-ha! The dead woman is connected in some way with the art gallery! Now let's watch Benji pick up a pencil in his teeth and dial the telephone!

Every scene in the movie is directed at the same deadening crawl, most of the dialogue is delivered in a dispirited monotone, and the solution to the mystery, when it comes, is shatteringly uninteresting. Even the happy ending isn't so happy. The human female that Benji falls in love with is reincarnated and sent back to Earth as a cat. The music swells on the sound track, and Benji and the cat rub sensuously against each other. My own cat, who knows a great deal about the sex lives of cats, says spending his nights in the sack with a dog is not his idea of a happy ending. 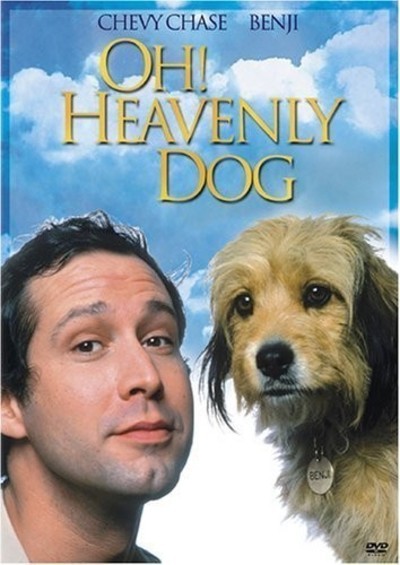