“Oh, God! Book II” qualifies as a sequel only because of its title and the irreplaceable presence of George Burns in the title role. Otherwise, it seems to have lost faith in the film it's based on. It begins with the same great idea for a movie (what would happen if God personally came down to earth and got involved in the affairs of men?), but it winds up as a third-rate situation comedy, using its subject as a gimmick.

Neither of the “Oh, God!” movies is, of course, seriously religious; they create God as a sort of ancient Will Rogers on a Christmas card by Norman Rockwell, and then give him lots of cute lines and paradoxical comic insights. But the original film, with God appearing to a supermarket manager played by John Denver, did at least follow through on its basic premise. What if God really did turn up in the checkout line? How do you behave when God blows the whistle and challenges you to test his rules?

“Oh, God! Book II” doesn't seem willing to devote a whole movie to the same subject; it uses God as basically just a deus ex machina. He is, of course, enormously appealing, and George Burns is rich and understated in the role. But after he appears to a little girl named Tracy (played by a very little actress named Louanne), the movie uses him as a springboard for scenes involving the little girl, her parents, her school, her psychiatrist, everything except what we'd really enjoy, more scenes with God.

Tracy's basic problem, it appears, is that she can see God and talk with him, but nobody else can. Her parents and teachers think she's talking to herself. God asks her to organize an advertising campaign to promote his image on earth, and she comes up with a slogan ("Think God") which her little play-mates plaster on every open space in town. But, meanwhile, a psychiatrist (Anthony Holland) determines that Tracy's got serious problems.

There are other sitcom-style distractions. Tracy's parents (Suzanne Pleshette and David Birney) are divorced. Tracy doesn't like her daddy's new girlfriend. The principal at school is a meanie. And so on. The movie's screenplay was written by no less than five collaborators, but they were so bankrupt of ideas that some scenes have a quiet desperation to them. For example: There's an awkward TV newscast staged in the movie, with Hugh Downs as the avuncular anchorman and none other than Dr. Joyce Brothers giving her opinion that little Tracy may, indeed, have seen God. It would be sad enough if the movie were using Downs and Brothers for laughs, but, God help us, they're brought in as authority figures.

There is, however, one additional small treasure in this movie, a supporting performance by Mari Gorman, who steals every scene she's in, playing Tracy's grade school teacher, Miss Hudson. She has a weird kind of off-balance walk and out-of-time speaking style that's infectious and funny. It's amazing that a movie so devoid of comic imagination would allow itself to play around with such an offbeat supporting performance. If Gorman had played, say, Tracy's mother, and if the rest of the movie had been equally willing to take chances with its approach, "Book II" could have been worth seeing. 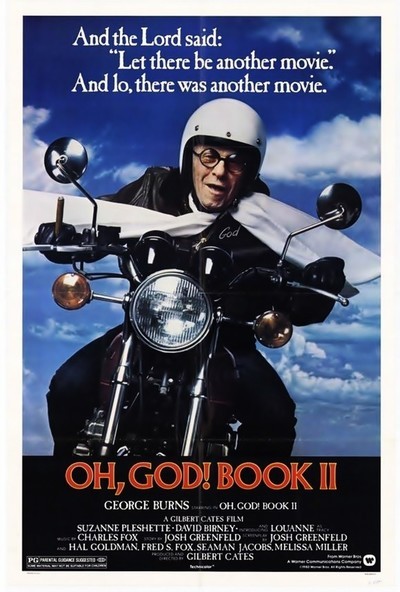