"Office," a musical dramedy directed by Hong Kong action filmmaker Johnnie To, has to be the only musical about the American sub-prime loan crisis and its impact on the Chinese/Hong Kong market. Based on a play by Sylvia Chang, "Office" synthesizes a number of Western influences, including "Mad Men" and "How to Succeed in Business Without Really Trying," to produce something uniquely expressionistic, joyful, and engrossing. If you've seen any of To's action films—don't worry if you haven't: try "Exiled" or "Drug War"—you know that To is a master choreographer. But what's most surprising about "Office" is the way To takes screenwriter and frequent collaborator Wai Ka-Fai's layered script, and stages a light film about fidelity, and the seductive qualities of life in the big city. Several of To's recent films concern economic upheaval and its effect on personal relationships, but "Office" is one of his recent best because it makes something as dire as a financial crisis seem like a natural subject for a modern musical.

These three romantic pairs express their ideological differences through lyrics that are as alienatingly direct as Bertolt Brecht's book from "The Threepenny Opera," and as propagandistic as The Cultural Revolution's self-praising slogans. Xiang enthusiastically shares his dreams: "I want to be the pillar of society—to think, to do, to take responsibility ... I want to be promoted and successful, but I'm anxious about it." This contrasts with Kat's relatively modest goal to hide her identity and get lost in the belly of the office: "Do you believe I like myself only if I'm unlike myself?" Meanwhile, a chorus of office workers pay tribute to Jones & Sunn—"We'll build a financial empire with one heart. We're one big family with one heart"—before David and Sophie share a moving duet. He sings, "Youthful dreams carry me away from old home," and she replies, "The road from my hometown isn't as wide as the one here, yet people on the road don't clash with one another."

These music numbers are filmed and choreographed as playfully as any of To's best gun-fights. The camera gracefully navigates sets decorated and delineated by skeletal halogen bulbs arranged in elaborate, Busby Berkeley-style halos. We watch characters pouring their hearts out, and every time they do, they look like they're declaring their intentions to no one but themselves, even when they're singing with each other. There are no big dance numbers in "Office," but the film's modernist, Mondrian-by-way-of-Jacques-Tati sets complement the characters' love/hate attraction to themselves, and their environment, by highlighting the sleek, busy atmosphere of an office whose hyper-mannered style does nothing to hide its hulking patchwork nature.

Characters routinely make small, but composed movements when they belt their hearts out, reminding viewers what the film's incredible set design never lets us forget—cities and offices make willing, hopeful prisoners out of us. These fictional beings inhabit these spaces because they're drawn to them, because they're imposing, and beautiful, and completely unnatural. They're loyal to each other until they can't be, because that's the impersonal nature of life in the shadow of 20th century capitalism. Even a song as loopy and earnest as the one that explains the impact of the Lehman brothers' bankruptcy through the metaphors of wolves and sheep works since it pointedly brings "The Threepenny Opera" to mind.

Heavy sentiments are expressed with clarity and joy in direct lyrics like "I didn't expect to be the one who would be dying to survive." Chang and Ka-Fai also offer genuine insight to their protagonists' hyper-compartmentalized mind-sets in through light, breezy exchanges, like when Ho dismisses insinuations about his personal life with "There are some things I don't need to know. There are some things I don't want to know."

Everyone in "Office" wants to believe the best of each other, because everyone inevitably believes that they are in control of their own destinies—until proven otherwise. To, Chang, and Ka-Fai have made a focused, imaginative comedy about the contradiction of finding and cultivating personal relationships in an impersonal environment. You can see the paradox inherent in these tenuous bonds in the ad campaign that Xiang manages for lingerie that is both "body-warming" and "heart-warming." Short-term yields and long-term successes tantalize everyone in the film, making it impossible to tell whose loyalty will remain true, and for how long. "Office" may not be on your radar, but it is a must-see for anyone looking for a thoughtful, and genuinely spectacular new musical. 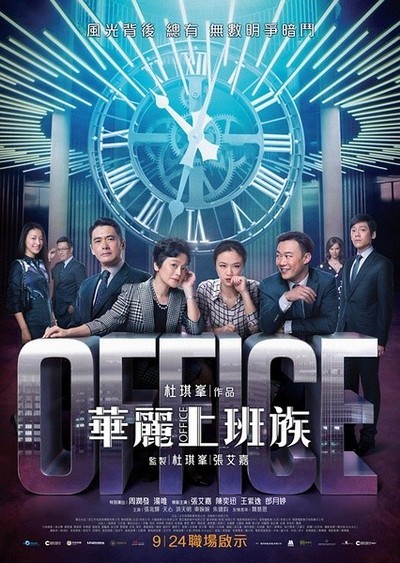