A man in a wheelchair rolls toward the Capitol Building. It is social justice and health care activist Ady Barkan, one of TIME magazine's 2020 most influential people, and he is on his way to testify before Congress. "Ady's been fighting like hell for his life and for all of ours," says Committee Chair Jim McGovern as he introduces him.

Barkan has been speaking in public since he was in high school. But as he tells the committee, this time is different. It is the first time he is not using his natural voice. He has ALS, a "deadly debilitating disease with no cure and very little treatment," and he can now only "speak" through a Stephen Hawking-style mechanical device directed by his eye movements. He is using it to speak on behalf of everyone who is in need of health care, meaning everyone, and he is urging Congress to adopt Medicare for All.

"Not Going Quietly" is about Barkan's activism, a combination of old school grassroots organizing and new-school social media. When someone raises a question about whether he is exploiting his disease for political gain, he has no hesitation in answering, "Absolutely!" He is a savvy enough strategist to know that an attractive but sick young guy with a wife and toddler is a more powerful argument than a bunch of statistics in a binder. But when his voice finally fails and he has to use the mechanical voice synthesizer, he wonders if he should make that appearance before the committee. Maybe, he says, it would be better to have his remarks read by someone else.

Liz Jaff, Barkan's Be a Hero PAC co-founder, reminds him that his situation is a critical part of the message. "What's real is this," she says. "Force them to face it." And so, he does. He is a young husband and father who is dying. Might as well use it to make it harder for elected officials to pretend the system is working.

The movie is also about the bigger set of questions around that decision. Most of us have a lot of trouble deciding what our priorities are assuming we have decades to sort it out. Barkan has a very limited time. He adores his wife and son and wants to be with them as much as possible. But he wants to die being proud of the way he used his time, his voice, and even his disease. He wants his son to be proud of him after he is gone. He would like to have another child, but that would add to the almost unthinkable burden on his wife. That existential conflict about what makes life meaningful is as critical a part of the message as the need for better health care and the vital role of citizen participation in a democracy.

Health care is unquestionably one of the most complicated problems the government ever has to grapple with, even without the obstacles and obfuscation from dark money and corporate lobbyists. We do not need a briefing book, but the film would be more effective if it clarified some of the priorities Barkan and his group are advocating. Instead, we see the once-viral, now all-but-forgotten footage of one of Barkan's colleagues confronting then-Senator Jeff Flake in an elevator to urge him to investigate the sexual assault charges against then-SCOTUS nominee Brett Kavanaugh. Flake's support is portrayed in the film as an important success. But Justice Kavanaugh was confirmed and Senator Flake is gone.

Barkan is still here, though, and we are lucky to have this film to speak for him. 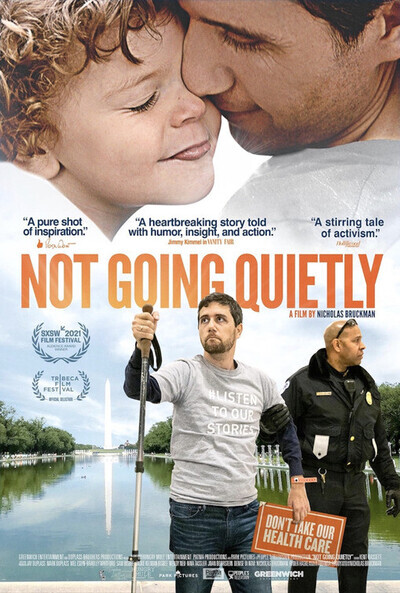 Ady Barkan as Self

Elizabeth Jaff as Self

Rachael King as Self

Nate Smith as Self

Ana Maria Archila as Self

Bernie Sanders as Self