Set aside for the moment the details of the Dracula story. They've lost their meaning. They've been run through a thousand vampire movies too many. It's as easy these days to play Dracula as Santa Claus. The suit comes with the job. The kids sit on your knee and you ask them what they want and this year they want blood.

Consider instead Count Dracula. He bears a terrible cross but he lives in a wonderful sphere. He comes backed by music of the masters and dresses in red and black, the colors De Sade found finally the most restful. Dracula's shame as he exchanges intimacies and elegant courtesies with you is that tonight or sometime soon he will need to drink your blood. What an embarrassing thing to know about someone else.

Werner Herzog's Nosferatu concerns itself with such knowledge. Nosferatu. A word for the vampire. English permits "vampire movies" -- but a "nosferatu movie?" Say "vampire" and your lips must grin. The other word looks like sucking lemons. Perfect. There is nothing pleasant about Herzog's vampire, and this isn't a movie for Creature Feature fans. There are movies for people who like to yuk it up and make barfing sounds, God love 'em, while Christopher Lee lets the blood dribble down his chin, but they're not the audience for Nosferatu. This movie isn't even scary. It's so slow it's meditative at times, but it is the most evocative series of images centered around the idea of the vampire that I have ever seen since F.W. Murnau's Nosferatu, which was made in 1922.

That is why we're wise to forget the details of the basic Dracula story. Nosferatu doesn't pay them heed. It is about the mood and style of vampirism, about the terrible seductive pity of it all. There is a beautiful passage early in the film showing the hero, Jonathan Harker, traveling from his home village to the castle of Dracula. The count has summoned him because he is considering the purchase of another home. Harker makes the journey by horse path. He enters into a high mountain pass filled with tenuous cloud layers that drift by a little too fast, as if God were sucking in his breath. The music is not your standard creepy Loony Tunes, but a fierce melody of exhilaration and dread. Deeper and deeper rides Harker into the cold gray flint of the peaks. Some will say this passage goes on too long and that nothing happens during it. I wish the whole movie were this empty.

Before long, we are regarding the count himself. He is played totally without ego by Klaus Kinski. The count has a monstrous ego, of course -- it is Kinski who has none. There is never a moment when we sense this actor enjoying what a fine juicy cornpone role he has, with fangs and long sharp fingernails and a cape to swirl. No, Kinski has grown far too old inside to play Dracula like that: He makes his body and gaunt skull transparent, so the role can flicker through.

Sit through Nosferatu twice, or three times. Cleanse yourself of the expectation that things will happen. Get with the flow. This movie works like an LP record: You can't love the music until you've heard the words so often they're sounds. It's in German with English subtitles. It would be just fine with no subtitles, dubbed into an unknown tongue. The need to know what Dracula is saying at any given moment is a bourgeois affectation. Dracula is always saying, "I am speaking with you now as a meaningless courtesy in preface to the unspeakable event that we both know is going to take place between us sooner rather than later." 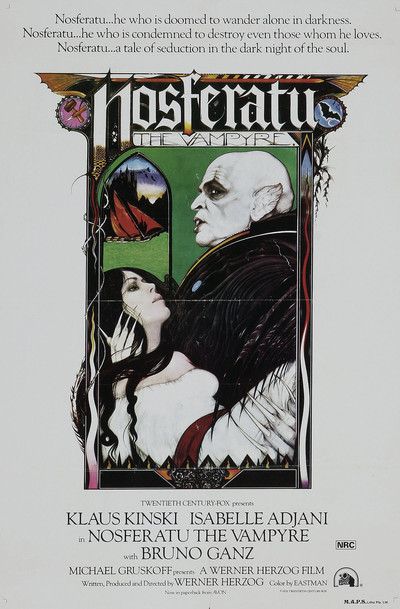