A better title for “Nobody’s Fool” would be “Tyler Perry’s Filth-Flarn-Filth.” The writer-director really leans into the R-rating on this one: it’s a raunchy affair whose best lines are unprintable and whose middle act features a sex scene that got the packed audience at my theater hooting with lusty approval. You might not want to take your church-loving grandmother, though considering how much church Grandma needs to attends every week, she’s probably not unfamiliar with debauchery. I suppose she’ll be fine with all the nookie and the creative words Perry’s cast uses to describe said nookie.

In her third film of 2018, Tiffany Haddish finally gets top billing and the chance to cut loose like she did in her magnificent turn in “Girls Trip.” But the movie’s marketing is misleading, because “Nobody’s Fool” is not about her character. In fact, the film could exist, in far less amusing a fashion, without her entirely and still make sense. In my review of “The Oath” on this site, I wrote that there oughta be a law against wasting Tiffany Haddish in a movie. There should be an even bigger law against making her extraneous. Granted, she’s the film’s biggest comedic element and Haddish serves that role very well here, plus Perry gives her a surface level back history that has the potential for dramatic exploration. But her character’s usefulness to the plot wears out barely an hour into the 110-minute runtime, and the film struggles with what to do with her.

Two things stood out at the beginning of this film. First, the Lionsgate logo that normally introduces Perry’s work had been replaced by the “Paramount Players” logo. Second, I could have sworn the credit didn’t include the now-standard words of ownership “Tyler Perry’s” before the title. I can be forgiven if I missed them, because at the same time the title appears, Perry is haphazardly filling the screen with back and forth text bubbles. The electronic conversation is between advertising executive Danica (Perry staple Tika Sumpter) and Charlie (actor name purposely withheld for spoiler protection). Charlie is Danica’s online paramour, a man she has never met yet has fallen for head over heels. Charlie has a sexy voice—I believe one actor refers to it as “the Idris Elba”—and he lives on an offshore oil rig whose wi-fi reception is too poor for him to ever give Danica a live look at him via Skype or FaceTime.

Charlie sounds too good to be true, but he fills all the checkboxes on the list of qualities Danica wants in a man. And I don’t mean a figurative list, either. Danica has written all these items down in a warped homage to a list her mother, Lola (Whoopi Goldberg) once made when she was single. Lola’s list led her to her husband, a union Danica idolizes like a lovesick fan of improbable romances. Coincidentally, Danica’s company is creating an ad campaign for a perfume called “The List,” which comes with an ink pen so the consumer can scribble down her own catalog of romantic demands. Since Danica and her BFF Callie (Amber Riley) are the office’s only single ladies, they’re given the assignment.

Danica’s work is interrupted by Lola’s request that she pick up her daughter Tanya (Tiffany Haddish). Tanya is being released from prison after doing a 5-year bid. She’s a former addict whose own mother won’t put her up, presumably because she’ll smoke all the marijuana plants Lola is growing. Tanya’s first scene is her having wild sex in the back of a truck with a man she met in the prison parking lot. For reasons unexplained, she chokes the man unconscious before getting into her sister’s car. Tanya’s street-smarts allow her to immediately see through her sister’s mysterious new man. She thinks Danica is being catfished, a notion seconded by Callie. For viewers who don’t know what catfishing is, Perry does them a solid by including an extended appearance by Nev Schulman and Max Joseph, who host the MTV show, “Catfish.” This made me as suspicious as Tanya, because MTV is owned by Viacom, the same company that owns Paramount. So in effect, Perry is now shilling studio content in his movies. I don’t recall Lionsgate requiring him to include their “Saw” franchise character, Jigsaw, though his appearance would have spiced up “Boo: A Madea Halloween” for sure.

In addition to Charlie, another man is vying for Danica’s heart. He’s Frank (Omari Hardwick), owner of the coffee shop in Danica’s office building. Every morning, he gives her free coffee and a rose, neither of which she is happy taking. When Frank offers Tanya a job despite her felon status, Danica warms up a bit toward him. Most of “Nobody’s Fool” is Frank trying to win Danica, first from Charlie and then from her own snobby preconceived notions of Frank. Tanya shows up every so often as Frank’s ally, and the film delves so deeply in the mustiest of romantic comedy tropes and twists that I yelled out “Oh, come on Tyler!” in disbelief at one point.

Perry is also up to his usual questionable antics regarding the skin shade and class distinctions of his villains. The film’s focus on women worrying about getting a man may also irk some viewers. And his stories still veer violently between tones, though this is admittedly the funniest thing he’s written. For all his faults, he can still catch you off-guard with a one-liner or quip.

Truth be told, I would have loved a movie where Haddish, Riley, Sumpter and Goldberg just riffed on a variety of topics, as they all get some hilarious lines that feel completely off-the-cuff. Goldberg’s comment about a particular strain of her weed made me laugh so loudly I scared myself. In fact, there were several times in “Nobody’s Fool” where I laughed when I probably shouldn’t have. Perhaps in the next life I'll have some shame about that. The bigger sin here is that “Nobody’s Fool” wastes its comic goodwill and performances by wallowing in the same tired story elements Tyler Perry has been milking on TV and in his movies for decades. He’s done this before, and you’ve seen it before. 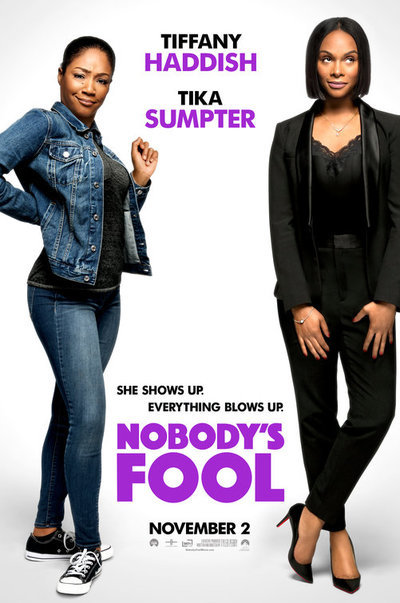 Rated R for sexual content and language throughout, and for drug material.