If the real-life heroine of the biopic "Noble" weren't actually named "Noble," the filmmakers would seem completely justified in changing it from whatever it was originally. As written and directed by Irish filmmaker Stephen Bradley, it's one of those movies that can be described as a triumph of the human spirit without any winking whatsoever, because the outlines of the story are true. It doesn't go quite far enough into melodrama to fuse all of its different pieces together into a satisfying whole (more on that in a second) but it's an engrossing film all the same: intelligent, sincere and unabashedly goodhearted.

In 1989, Irishwoman Christina Noble (Dierdre O'Kane) arrives in Ho Chi Minh City as a fortysomething tourist after a lifetime of coming to terms with her horrendous childhood and adolescence in Dublin. She grew up in a slum, lost her mother to tuberculosis and her father (spiritually, anyway) to drink, and was a ward of both the state and the Catholic church. She spent much of her teens and twenties suppressing her agony over those traumas and new ones, including an unplanned pregnancy ending in adoption. The sight of so many homeless kids on the streets of Ho Chi Minh city awakens the adult Christina's submerged maternal impulse. After trying and failing to help kids personally (bringing two girls to stay with her at her hotel; taking a gaggle of kids to eat in a restaurant on her tab) she decides to start a shelter, and is granted a permit. The catch: she has just three months to find a local partner and fund and build the place, after which point her tourist visa (which was always shaky thanks to her disruptive do-gooding) will expire.

What we have here is a mother lode, pun intended, of innately powerful material, and rather than try to tamp it down, the filmmakers avidly embrace its potential for old-movie melodrama, creating a film that could very easily be derided as simplistic and sentimental, but only if you've never shed a tear over an Irish lullaby. Bradley's script jumps around in time, starting with the childhood of young Christina (Gloria Cramer Curtis), which is envisioned subjectively, less as a documentary report than as scene one in a self-creation myth. The sooty 1940s urban panoramas, complete with piles of rubble and hand-washed clothes hanging from laundry lines and fire escapes, have the funereal grandness of Alan Parker's film version of "Angela's Ashes," but there's also a genuinely (and literally) lyrical undertow produced by young Christina's angelic singing voice (she wants to be a great musical star like Doris Day) which echoes on the soundtrack during key scenes. The scenes of the young adult Christina (played by Sarah Greene of "Penny Dreadful) are even more harrowing; their low point is a rape so nightmarish that the film does us the courtesy of leaving the details off-screen.

All the flashbacks make clear that at every phase of her young life, the same forces that were supposed to protect and nurture Christina failed her instead. This in turn gives the present-day sequences an oppositional feeling, as if Christina is (without quite consciously realizing it) coming to terms with the first part of her life, and all the traumas she'd suppressed, by trying to become the parent, or parental figure, that she was denied, first in her own home and then as a ward of the state.

That she's doing it in a country far from her own, with children of different races, is an issue that the movie barely explores; it's definitely an example of what's been called a "white savior movie." But it's one of the less irksome examples, because it's so strongly rooted in Christina's life experience and psychology, and because there are moments when Vietnamese citizens pointedly ask if she understands the implications of what she's doing and how her actions might appear to natives. "An Irish gutter is the same as a Vietnamese gutter," she insists, during a meeting with a skeptical official who could approve or deny a work permit, a statement that's true enough from her perspective that it would seem churlish to quibble over the particulars.

If "Noble" sounds a bit too tidy, that's because in some ways it is. This quality of neatness might not have undercut the movie at all if "Noble" had mustered the nerve to go even bigger emotionally, and turn Noble's story into something borderline-operatic: a work of powerful, very basic emotions that wasn't at all concerned with being sensitive, or with seeming realistic. (It very nearly becomes that whenever Christina sings.) As is, the meticulous re-creation of 1940s and '50s Ireland and 1980s Vietnam sometimes seem at odds with the film's broader gestures, such as the moment when a handwritten notice of Christina's mother's death is smeared by raindrops from a sudden cloudburst. But the movie's performances (particularly by Curtis, Green and O'Kane as the three stages of Christina) are so superb, and the heroine so unambiguously, well, noble, that the film's effectiveness can't be denied. 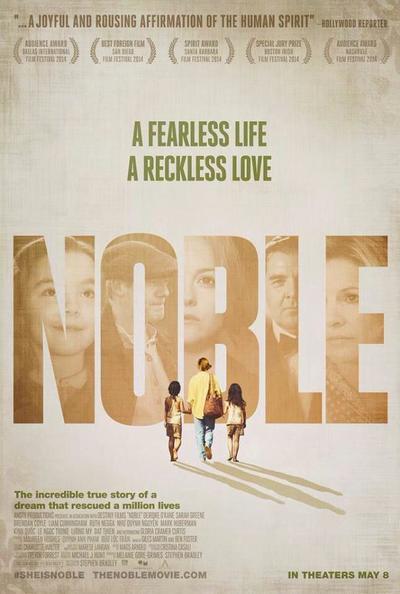