"No Good Deed" inspired controversy in certain circles when Screen Gems, the studio releasing it, decided to scrap all of its previously announced advanced press and word-of-mouth screenings at almost literally the last second. When pressed for a reason, they explained that there was a plot twist so crucial that they wanted audiences to experience it for themselves, without having critics ruin it for them ahead of time. As rationales go, this one is hard to swallow, but considering just how preposterous the film as a whole is, it seems of a piece.

Idris Elba stars as Colin Evans. As the story begins, he's up for parole after spending five years in prison in Knoxville for killing a man in a bar fight gone bad. Speaking before the parole board, he offers himself up as a changed man—he has even begun programs behind bars that the governor plans on instituting throughout the state—but his efforts are thwarted by a pesky board member who has the nerve to bring up the five women that he allegedly murdered, though no tangible proof could be uncovered, and the narcissistic personality disorder that puts him up there with the likes of Jeffrey Dahmer. This understandably bums him out, and, on the return trip to prison, he murders the guards transporting him and escapes, stopping along the way to brutally beat his apparently faithless girlfriend to death in an ugly sequence that is flashed back upon throughout the film. (I wouldn't dream of suggesting that the real reason behind the scrapping of screenings might be because of squeamishness over having to promote a film, during this particular week, in which a man savagely beats his girlfriend—but if you would like to, I won't stop you.)

Trying to drive through a terrible storm to freedom, Colin wrecks his car and turns up on the doorstep of Terri (Taraji P. Henson), a former hotshot prosecutor (specializing in cases involving violence against women, naturally). Terri is now a stay-at-home mom who frets that her husband (Henry Simmons) is no longer interested in her. Sure, the husband is out of town on a golfing trip, and, sure, it is just her and her two young children by themselves, but when this stranger rings her doorbell asking to use her phone, Terri sees nothing wrong with inviting him in, letting him make himself at home, and even gazing at him adoringly when she sees him changing his shirt. However, before the film can turn into a late-'80s Heart video, Colin reveals his true colors, and "No Good Deed" turns into what can only grudgingly be considered a game of cat and mouse.

"No Good Deed" might have chosen to develop its story in a manner that respects the intelligence of its viewers, by offering them ingenious twists on a familiar theme while always playing fair with them. It chooses instead to drag out the usual cliches in a manner so lazy as to display contempt for anyone foolish enough to pay to see the result. After about sixteen seconds of screen time, it becomes painfully evident that director Sam Miller and screenwriter Aimee Lagos have made a home invasion thriller that isn't so much "The Desperate Hours" as it is simply desperate. In order to keep the flimsy narrative going, both allegedly brilliant characters are forced to act stupidly. When even that isn't enough to help move things along, Lagos has to awkwardly insert a number of painful contrivances—a storm that is able to disguise or reveal incriminating sounds as required, a hot-to-trot neighbor (Leslie Bibb) who serves the same purpose here that Scatman Crothers did in "The Shining" (though she neglects to bring a snowplow with her) and a car alarm that miraculously knows exactly when to trip itself. The only thing missing here is a cat jumping out of the shadows every so often. Maybe the cat demanded script approval.

The only startling thing about "No Good Deed" is the fact that actors as talented as Idris Elba and Taraji P. Henson decided to sign on for a project that plays like a failed attempt at a Lifetime movie. Elba, of course, has been venerated in many quarters for his work on "The Wire," and Henson has proven herself a delightful presence in films like "Hustle & Flow" and "The Curious Case of Benjamin Button." To see them trying and ultimately failing to breathe life into these cliches is depressing.

I guess I should mention that towards the end of "No Good Deed," there is something that could technically be considered a shocking plot twist. However, in this particular case, the twist is so absurd, so arbitrary, and has so little effect on the proceedings that it feels like the kind of thing that Tyler Perry might have scratched for being too ridiculous.

For the record, there is an excellent 2002 film by the name of "No Good Deed," a nifty film noir that was directed by the great Bob Rafelson and co-starred Samuel L. Jackson and Milla Jovovich. This was a thriller that was smartly conceived, wonderfully executed and filled with strong performances (anyone requiring additional proof that Jovovich is more than just a pretty face is advised to check it out), and it always played fair with viewers as it unfolded its twisty narrative. That the 2002 "No Good Deed" has no relation to this one is another element in its favor. 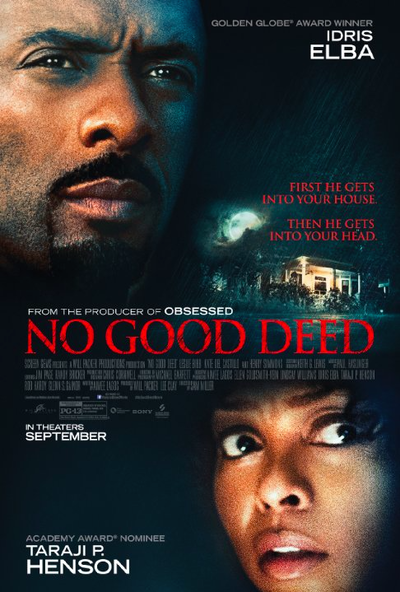 Rated PG-13 for sequences of violence, menace, terror, and for language