The last couple of weeks in August are typically a rough road for movie fans as the studios use the time to dump the cinematic dregs that they figured were too weak to survive during either the summer box-office derby or the equally competitive fall awards season during a period when they might conceivably make a few bucks off of audiences willing to sit through anything new at the multiplex. Trust me, films don't get much dreggier than "No Escape," a dreadful and creepily exploitative would-be thriller, low-grade trash that it is too silly and stupid to be as offensive as it frequently comes close to being throughout.

Owen Wilson plays Jack Dwyer, a down-on-his-luck businessman who hopes to reverse his sagging fortunes by packing up his entire family—ridiculously patient wife Annie (Lake Bell) and adorable moppet daughters Lucy and Beaze (Sterling Jerins and Clare Geare)—to work in the clean water program of some massive American conglomerate in their outpost in an unnamed Asian city. (Although never identified by name, the film was shot in Thailand, a fact that probably will not be stressed too heavily in their Chamber of Commerce videos, though it will probably get heavy play in the ones produced by neighboring countries.) The family has hardly landed in their hotel room when things start to go sideways—the television, phone and internet are out and when Jack ventures out the next morning in search of a newspaper, he winds up in the middle of a brutal street clash between police and protesters before barely making it back to the hotel.

As it turns out, revolutionaries angered over the recent American takeover of their water plant have murdered the corrupt prime minister, overthrown the government and are now hell-bent on finding and murdering any and all foreigners stranded in the chaos. The Dwyers manage to make it to the roof of their hotel—a favorite of visiting Americans—but they are strafed by gunfire from a helicopter and are forced to make their escape by leaping to the roof of the building next door. Now, stuck in a country where they don't speak the language and where nearly everyone wants to kill them on sight, the Dwyers struggle to stay alive until they can figure out a way to get out of the country. Helping them from time to time is Hammond (Pierce Brosnan), a mysterious Brit who always manages to turn up just when the script requires an improbable rescue.

With its clunky filmmaking, overt sadism (with the expected shootings, slashings and burnings augmented by an attempted rape and a little girl being forced at gunpoint to shoot her own father) and borderline xenophobia, one might assume that "No Escape" was the latest film from Eli Roth. In fact, it is the brainchild of fraternal filmmakers John Erick and Drew Dowdle, whose past collaborations, including the American version of "Quarantine," "Devil" and "As Above, So Below," have told stories about ordinary dopes struggling to escape from a confined space while being menaced by some terrifying menace or another. "No Escape" may shift their genre focus from horror to action and the size of the confined space may have expanded but other than that, the film (which John directed and Drew produced with the two collaborating on the screenplay) is basically the same. As has been the case with their previous efforts, the results this time around are pretty dire—the screenplay is bad boilerplate with the occasional lapse into outright buffoonery (I have seen comedies that have not inspired the kind of laughs that resulted at the screening I attended when Jack asks his wife "You okay" after a particularly hair-raising moment), the characters we are meant to be rooting for are bores and the action is never especially exciting—but the way in which it treats its ostensibly serious subject in such a flip and exploitative manner is far more offensive than anything they have offered up before.

Even if you can work your way around the potentially distasteful notion of examining the problems of the Third World through the eyes of accidentally inconvenienced First Worlders, you still have to deal with the fact that the film is so uncommitted to its ostensible cause that it not only neglects to identify the country in which it is set, presumably so as not to offend any potential ticket-selling market, but refuses to give any voice (other than "Kill Kill") to the those doing the revolting, preferring to see them as nothing more than faceless hordes hell-bent on slaughtering anyone who comes across their path. Then again, it is perhaps just as well that the screenplay eschews the political aspects for the most part because the one scene in which they come to the forefront—in which the Pierce Brosnan character relates the evils of American companies who come in and seize Third World industries in order to maximize profits—is an absolute embarrassment that drags the already poky proceeding to a dead halt from which it never recovers.

Dramatically inert, unintentionally funny (especially during the largely incompetent usage of slow-motion photography that borders on parody at times) and almost pornographically violent at time, "No Escape" is an ugly, ugly film from which no one emerges completely unscathed. For Wilson, this is a strange throwback to the days in which he was shoehorned into genre films (such as "Anaconda," "The Haunting" and "Behind Enemy Lines") that were uncomfortable fits for his laconic charms and for Brosnan, this is the latest in a depressingly long string of films in which he is far superior to the material that he has been given to work with. Why they would choose to appear in something so pandering, mean-spirited and manipulative is beyond my ability to compute but for whatever reason, the end result is that they have landed in one of the most unpleasant films of the year. 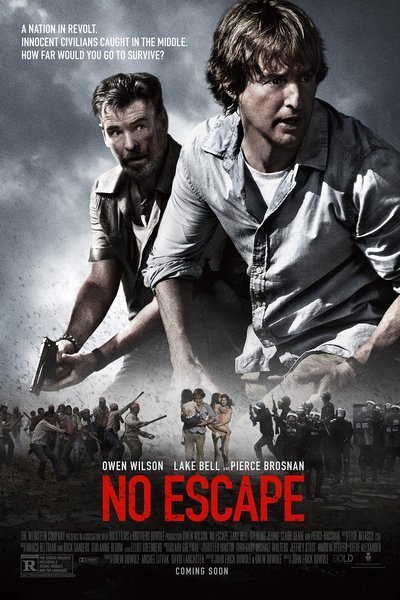