As Above, So Below

I wish I could recommend "As Above, So Below" more strongly. It's that rare found-footage film with a strong premise,  a memorably eccentric style, and plenty of energy to burn. It's also poorly conceived, and hard to watch. Normally, that's not such a terrible thing when it comes to B-horror films, the kind of genre fare that handily coasts on chutzpah alone. Then again, the novelty of exploring an already-confined space—subterranean Parisian catacombs—shot through a conspicuous fish-eye lens is only so endearing. That's the biggest stumbling obstacle preventing viewers from enjoying "As Above, So Below," a movie that's as close as recent horror films have come to approximating the feel of a haunted-house attraction. The film's violent, Richard Simmons-worthy shakey-camerawork evokes "Saving Private Ryan"'s Omaha Beach sequence. There's some great impressionistic visual cues throughout the film, as when dust and rubble scatter around the camera during the film's introductory scene. And the movie's cramped setting makes the film atmospheric enough to be frequently creepy. But when the film's protagonists finally put their rinky-dink digital head-rigs down, you will cheer, and it won't be for them.

Since it's a movie-shaped theme park ride, "As Above, So Below" is bogged down by way too much narrative baggage. Human-shaped plot point Scarlett (Perdita Weeks) is our guide through the French tunnels. A super-smart explorer in search of the Philosopher's Stone, Scarlett enlists the help of fraidy-cat language expert George (Ben Feldman, or Ginsberg from "Mad Men"), stoic cameraman Benji (Edwin Hodge), and full-of-it urban explorer Papillon (Francois Civil). Together with Papillon's companions Souxie and Zed (Marion Lambert and Ali Marhyar), Scarlett's group searches the French catacombs for the Stone, and inadvertently discovers what may or may not be a gateway to Hell. Along the way, they're improbably confronted with a laundry list of goofy ghosts and creepy objects, including a haunted telephone, an impossibly deep pool of blood, a burning car, and a malnourished—and probably undead—French raver named La Taupe (Cosme Castro).

This gruel-thin scenario is perfectly reasonable when you think of it in the context of crass real-life attractions like Berlin's Grusellkabinett, a haunted house attraction built on top of preserved Nazi bunkers. It's garish and excessive, but seeing stone gargoyles, anorexic witches, and hanged men in the midst of an already creepy setting can be fun when you accept that the name of the game is sheer overkill. Morever, Weeks and Feldman don't have to do much to sell their stick figure protagonists' enthusiasm. Feldman and Weeks are charming enough to make you believe that their characters really want to explore, and are therefore always thinking of new, moronic ways to discover the next secret chamber, push through the next tiny hole, and sneak past that one corpse that looks suspiciously like the Bad Seeds' Warren Ellis. You actually won't find fault with their generic need to see and do things that normal, semi-intelligent people know not to, like take the hood off of a hanged man's face. It's a bad idea, but not an offensive decision in a film that sometimes feels like a series of video-game cut scenes you cannot fast-forward through.

Then again, "As Above, So Below" falters most when it tries to be a movie. When Scarlett's group tries to assert themselves as people (!!!) haunted by personal trauma—dead dads, brothers, guys in cars, etc.—the film drags needlessly. Like, I'm sorry, but if you're going to wander around teeny-tiny tunnels that may or may not be the path to an infernal plane of existence, I don't really care what your pre-Hellmouth life was like. That stuff is for your therapist, not a 93-minute survival-horror adventure.

Still, if I could get a clear view of the ghost of your dead gallic buddy, or the aforementioned gargoyle that possibly (?) has took a bite out of your face, you could throw any number of dead friends, relatives, and notary publics at me. The makers of "As Above, So Below" earn points for trying to make their film look different than the preponderance of found-footage junk. But their distinctive, impressionistic camera-work is also head-splittingly alienating. Even viewers with cast-iron stomachs will want a barf-bag, a bottle of Dasani, and a strong shoulder to rest their head on just to prevent early on-set car-sickness. "As Above, So Below" is novel enough to be worth the price of admission, but you'll think twice before getting back in line for a second visit. 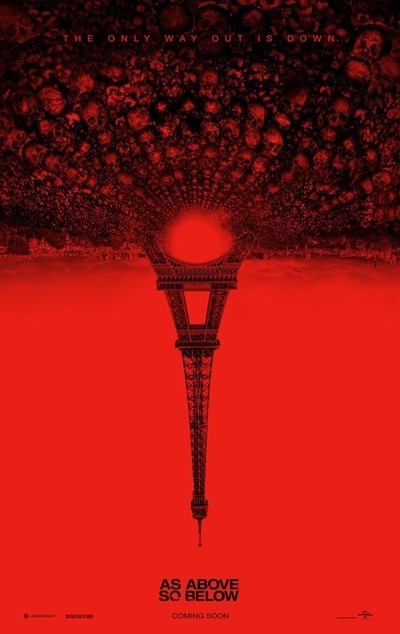 Rated R for bloody violence/terror, and language throughout