What brave strangers joined me at a morning showing of “Nine Lives,” which was deemed not worthy enough to screen early for critics?

A solo gray-haired woman, who seemed far more interested in consuming her large bag of popcorn than in what was displayed on the multiplex screen.

A middle-aged lady, accompanied by a young girl age four or five, who spent the entire nearly 90-minute running time staring at her cell phone.

And, me, someone who is at least being paid to give up part of her own life to see “Nine Lives,” a supposed family comedy about a billionaire real-estate tycoon who becomes trapped in the body of a tomcat.

That is it. Just four people, in spite of a cast that boasts two Oscar winners—Kevin Spacey and Christopher Walken, who must have some hefty overdue bills they need to pay off—along with a director, Barry Sonnenfeld, who continues to shred his reputation as a sharp filmmaker, which was earned after the massive success of the decades-old “Men in Black” and “Addams Family” franchises.

Like cats, audiences can sometimes sense when something is no good. Let’s just say I have been to wakes that have elicited more laughs.

Just which of the five screenwriters that scribbled this catastrophe (I am allowed at least one feline pun, aren’t I?) thought it was a good idea to revive the body-switch gimmick from the ‘80s and mate it with the workaholic-dads-are-bad theme from the ‘90s? Clichés remain clichés if you don’t make an effort to somehow re-invent them for a new generation.

Not that there isn’t an attempt at reflecting today’s headlines, as Spacey’s self-centered Manhattan mogul Tom Brand fusses over details concerning the size of a tower bearing his company name instead of attending his daughter’s 11th birthday party. He throws a snit fit when it appears that an edifice located in Chicago might prevent him from having the tallest phallic symbol in the Northern Hemisphere. Let’s see. Rich, egotistical, self-centered, insulting, short-tempered and obsessed with the length of his manly skyscraper. Who does that sound like?

To make amends, Brand ends up buying a cat at a rather strange pet emporium overseen by a rather strange proprietor played by Walken. On the way home with the gift, he decides to make a pit stop on the top floor of his tower and is struck by lightning. That means Spacey can pretty much dial in the rest of his part just by doing a voiceover since his character now takes the form of a cat known as Mister Fuzzypants (not funny) while his comatose body lies in a hospital bed.

I am guessing that anyone tempted to see “Nine Lives” would be anticipating plenty of four-pawed high jinx to chortle over. Isn’t that why YouTube is littered with such clips (some of which actually start off the film)? But even this dog person knows that cats generally like to call their own shots, which explains why the puss here is primarily an obvious CG creation.

Too bad the human actors couldn’t have CG stand-ins as well. No one, not even Jennifer Garner as Brand’s hapless second wife and Cheryl Hines (“Curb Your Enthusiasm”) as his bitter ex, is left unscathed. Not when probably the lone, close-to-humorous notion revolves around Walken—the only person besides the audience who can hear Spacey’s thoughts—threatening to “fix” Mister Fuzzypants (still not funny) unless he changes his priorities in life.

There are numerous topics that stretch the notion that the PG-rated “Nine Lives” is fine for most ages, beyond the expected pee and poop gags. How lovely that the cat gets drunk on 50-year-old Scotch, and Hines, who takes some verbal hits as the shrewish first wife, guzzles martinis at a kiddie birthday party. Garner, forced to do most of her scenes with a camera-hog cat who probably has never even seen Garner's own fine body-switch work in “13 Going on 30,” is revealed to have been considering a divorce. Pulling the plug on Spacey comes under discussion. Even worse, it appears that a suicide is in the offing during the movie’s climax.

And, oh, how the kindergarten crowd will chortle at the lame sight gag involving a “Hang in There, Baby” poster that hails from the early ‘70s.

Which leads me to this question: Just who is supposed to be the target audience for “Nine Lives”? Certainly not feline fanciers, since we are told that, “Cats don’t care if you live or die.” Definitely not fans of Spacey, who did a much better coma on the most recent season of “House of Cards,” or Walken, whose trademark wild mass of hair seems more limp than usual.

It all goes to prove one thing: That Walt Disney knew what he was doing when he made “The Shaggy Dog” instead of ”The Shaggy Cat.” 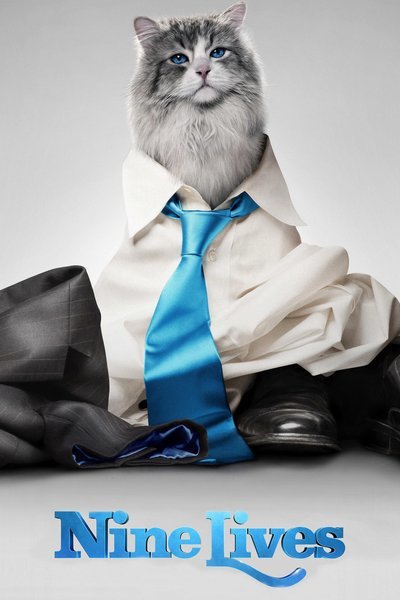 Rated PG for thematic elements, language and some rude humor.