If you didn't know that "Nine Days" was the feature debut of director Edson Oda, you would assume Oda had many films under his belt. He presents his bold vision with confidence (he also wrote the script), and he's courageous enough to have at the center of his first film the eternal issues of the human condition: What does it mean to be alive? How do we appreciate life while we are here? Is it even possible? Oda does not shy away from these crucial questions, and finds a format to address them with a minimum of hokum, and a minimum of New-Age bromides. "Nine Days" got raves when it premiered at Sundance last year. It's such an exciting debut.

There's a moment early on that shows Oda's sensitivity at accumulating small everyday moments in service to the story being told. He grounds the otherworldly world in the familiar. In a small clapboard house, surrounded by forbidding desert, co-workers Will (Winston Duke) and Kyo (Benedict Wong) watch a video recording of a violin prodigy's concerto, playing on one of the screens in the wall of vintage televisions, each one connected to an old-school rickety VCR. Will and Kyo are dressed up for the concert. Will put on a bowtie. They stand at attention, staring at the small screen. They look like proud fathers.

What this all means becomes clear in the well-crafted opening sequences, with their deliberate pacing, and disinclination to rush or over-explain. Will is in charge of evaluating all unborn souls, choosing which ones get to move on, and enter the world as new life. He puts them through a rigorous nine-day process. Will himself was alive once. He was once "chosen" by a figure just like himself. And so he understands the world, he understands humanity. He comes at this process with a stern and inflexible command. He must choose the most suitable soul. He cannot get too involved. The violin prodigy was one of Will's picks, and he watches over her life on the television screen with almost unbearable emotion. She is "his." He keeps meticulous file folders on all of his "picks," storing away carefully labeled VHS tapes of every moment of their lives.

New candidates walk across the stretch of desert and knock on his door. Played by Tony Hale, Bill Skarsgård, Arianna Ortiz, David Rysdahl and Zazie Beetz, these candidates arrive with different personalities and sensibilities, and diverse attitudes towards the process. Will explains that once they are born on earth, they will forget all that has happened, but "you will still be you" (the implication being that we arrive on this earth with essences already in place). Right before the new batch of candidates show up, Will was horrified at footage of Amanda, the violinist, crashing her car on the way to a concert (the television screen switches to color bars and then goes black). Will cannot understand. He searches his files for a clue to her state of mind. Did he miss something? How could this happen? He takes the loss hard. Meanwhile, he works with each candidate, putting them through their paces. But something is "off" in Will. His equilibrium is shattered. Duke does a wonderful job at establishing Will's normal character so we can instantly perceive that something has changed.

The strength of "Nine Days" is not so much the scenario (although that is imaginative and well-constructed) but the mood Oda sets, the clarity with which he establishes this world, how it operates, its rules and traditions. There is a score by Antonio Pinto but it drops out for long stretches. When music shows up, it has great resonance and power. Oda's script is filled with talk. The scenes are long and often deal in very difficult metaphysical and ethical questions. It's common to hear people repeat, ad nauseum, that "show, not tell" is an important rule. But there are plenty of very "talky" films that are riveting. Rules are made to be broken, and Oda's script does. The actors help in this, approaching the material with vulnerability and intelligence.

Each scene shows the process unfolding. Every detail is important. One of the candidates, Emma (Beetz), is different than the others. She can't play by the rules of Will's questionnaire. She asks questions about his questions. When presented with a hypothetical scenario and asked what she would do, she sometimes says, "I don't know." Unheard of. Will is frustrated by her and yet is strangely drawn to her, too. Beetz, with her transparent face, her beautiful emotional openness, embodies receptivity. She takes it all in. She may be a new soul, but she can't help but look at Will and sense his unfinished business. She asks him why his experience as a living human was so painful, and Will refuses her requests for more information. He shuts the filing cabinet on his own story.

There are other films that stroll into this metaphysical almost spiritual territory, Albert Brooks' "Defending Your Life" perhaps the most obvious example. In "Defending Your Life," the recently-dead are sent to a Purgatory-type resort, where they are judged on whether or not they are ready to "move on," presumably to Heaven. Brooks approached this material with humor, and achieved a profound result. "Nine Days," however, has a yearning bittersweet quality, generated from Will's unhappy awareness of the pain awaiting the unborn souls when they leave his care. There's also the question of whether or not life is worth living, even in the face of all that pain, and the eventuality of death.

Although Kurosawa's "Ikiru" does not have a supernatural or sci-fi element, its concerns are similar. Is it possible to be totally aware of life as you are living it? Does the awareness of death change how we live? We always think we have a little more time. We waste the time we have sweating the small stuff. The famous final scene of "Ikiru" is echoed in "Nine Days," in the moments when Will gives the rejected candidate a chance to experience a moment of life that they've observed on the television screens. Not surprisingly, the candidates choose the fleeting moments, the moments of small sensory joys: riding a bike, playing in the waves. In the final scene of Thornton Wilder's Our Town, Emily, who has been given the chance to re-live one day of her life, cuts the exercise short because it's painful, life moves by too quickly. When she says goodbye to the earth, it's the small everyday things she will miss:

"Goodbye to clocks ticking ... and Mama’s sunflowers. And food and coffee. And new ironed dresses and hot baths ... and sleeping and waking up. Oh, earth, you are too wonderful for anybody to realize you. Do any human beings ever realize life while they live it—every, every minute?"

This is the territory "Nine Days" inhabits. It's daunting territory and the pitfalls—of sentimentality, of over-simplification, of pushed emotions accompanied by sweeping strings—are everywhere. "Nine Days" doesn't avoid all those pitfalls. There are a couple of moments that feel not so much pushed as over-determined. Will's journey—and Emma's pushing of Will to open up about his pain—trembles on the brink of a cliché, like the moment Robin Williams makes Matt Damon cry in "Good Will Hunting." However, Oda's touch is extremely controlled, and the actors are so connected to what they are doing, that the film doesn't feel manipulative. The catharsis, when it comes, is exhilarating.

It's easy to sweep an audience away with emotion. What is not so easy is to create a film that asks Emily's question: "Do any human beings ever realize life while they live it?" and ask it honestly. "Nine Days" not only asks the question over and over, but allows space for the answer to reveal itself. 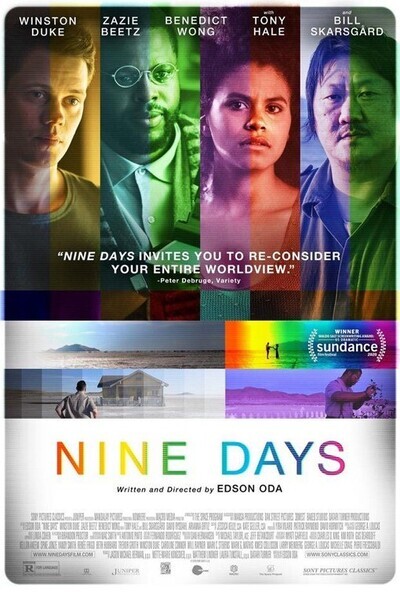 Winston Duke as Will