If you were to judge the new British import “Nina Forever” based solely on a one or two-line description, my guess is that many of you would dismiss it as nothing more than a joke, and one that's not particularly funny or original. It is true that the basic conceit makes it sound like what might ensue if the writers at “Fangoria” were suddenly put in charge of the letters section of “Penthouse,” but once it gets past establishing its admittedly bizarre premise, it presents viewers with a unique and increasingly compelling blend of horror, deadpan dark humor and eroticism. "Nina Forever" subverts audience expectations at every turn and develops the kind of genuine emotional power that keeps it from being just another gory goof.

Our heroine is Holly (Abigail Hardingham), a 19-year-old supermarket checker who is studying to become a paramedic and who is nursing a crush on Rob (Cian Berry), a brooding co-worker who is rumored to have attempted suicide in the wake of surviving a car accident that took the life of his girlfriend. (“I’d love it if my boyfriend tried to kill himself because I died.”) After being dumped by her own boyfriend for allegedly being “too vanilla” (which is amusing since the guy making this charge looks bland enough to be a member of a Coldplay tribute band), Holly decides to set her sights on Rob and they begin to date. However, when they go back to his place and begin to have sex for the first time, they are interrupted in mid-act by Nina (Fiona O’Shaughnessy), who is Rob’s late girlfriend and who inexplicably materializes from the mattress, naked and still bleeding copiously from her injuries, to remind Rob that she is his girlfriend—they never properly broke up, after all—and to sneer at Holly, who she views as an interloper and an unworthy one at that. (“You’re dead!” “Sure, but I kept my standards.”)

Understandably, Holly flees in disgust but because of the attraction that she feels towards Rob (not to mention her unspoken determination to prove, if only to herself, that she has a dark side after all), she returns to him and when Nina pops up again when start having sex, she even proposes that the undead interloper join in for a threesome. Nina refuses the offer—she isn’t keen on sharing her boyfriend and can’t feel much of anything anyway—and the two fall into a battle of wills that finds Nina constantly sniping at Holly (especially in regards to how young she looks) and trying to run guilt trips on Rob. Meanwhile, Holly tries to insinuate herself further into Rob’s life while trying to get rid of all traces of his life with Nina in the hopes that it will inspire her to move on. This is not as easy as simply repainting the apartment and constantly replacing the sheets that are constantly being stained with blood. Not only has Rob been unable to move on from the tragedy—he still goes to Sunday dinner every week with Nina’s parents (David Troughton and Elizabeth Elvin), even bringing Holly along one time—but it seems as if Nina has managed to inspire a certain attraction in Holly as well.

Genre completists may recall that the basic premise of “Nina Forever” was also seen in last year’s “Burying the Ex,” another film about a triangle involving a boy, a girl and a ghoul. That one played the premise entirely for laughs based largely on cartoonish gross-out moments and a borderlines misogynistic attitude that not even the sheer professionalism of director Joe Dante could quite overcome. In the case of “Nina Forever,” debuting writer-directors Ben and Chris Blaine seem to be starting out in that direction, albeit in a more low-key style—the scene in which Nina makes her first appearance is bizarrely amusing, especially in the way that everyone just kind of accepts the unbelievable situation, and enough blood spills out of her wounds to more than satisfy the gorehound crowd. If the film had continued along this path, it probably would have grown repetitive fairly quickly but the Blaines have a few surprises in store as the story turns into both a meditation on the perils of letting grief dominate one’s life and an examination of the dangers of trying too hard to prove, both to yourself and others, that you are not what others perceive you to be. There are also fascinating developments in the relationship between Holly and Nina, which grows to a point where Holly appears to be more intrigued by her undead rival than in her living boyfriend.

This is tricky material, to be sure, and the kind that is almost entirely reliant on the strength of the performances to push it through—if they can’t make it convincing, then the whole thing just becomes a kinky “Tales from the Crypt” episode. Happily, “Nina Forever” has been blessed with some of the better performances to be seen in the horror genre in quite a while. As Holly, Abigail Hardingham is pretty astounding in the way that she hits every note of her character’s emotional journey from sweetly awkward to genuinely haunted with absolute precision while Fiona O’Shaughnessy is equally impressive in the way that she manages to deliver her caustic snipes without ever letting Nina become nothing more than a blood-soaked shrew—she may be dead but in her determination to win back Rob, she does have a point. Cian Barry’s turn as Rob may strike some as overly passive but that is a perfect fit for his character, a person who unwittingly allowed his grief regarding the past to destroy his present and threaten his future. Elizabeth Elvin and David Troughton are also strong as Nina’s devastated parents and the scene in which they finally have it out with the guy who stands as a constant reminder of the loss of their daughter is actually the most brutal and horrifying scene in the entire film.

“Nina Forever” is a real surprise—a nifty work that is smarter, funnier, sexier and more emotional resonant than one might rightly expect it to be. (It is infinitely more plausible than anything that has sprung from the word processor of Nicholas Sparks.) Those expecting a broad, bloody romp may be put off by its relatively serious approach to the material, but those who are in the mood to see a film that offers an intelligent look at the complexities of human relationships and aren’t put off by the sight of a lot of blood will be amply rewarded. Like the title character herself, “Nina Forever” is the kind of film that gets under your skin and doesn’t let go. 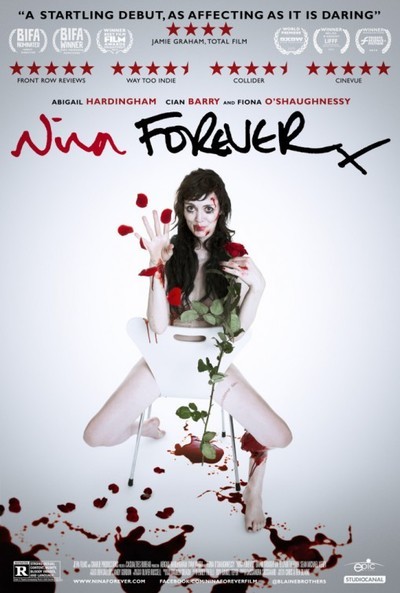