Having grown up in the era of “Trilogy of Terror” and “Creepshow,” and loving shows like “Amazing Stories” and “Tales From the Crypt,” there’s something enticing about the anthology film and TV series—a platform on which various genre voices are allowed freedom of expression. While these inherently result in rollercoasters in terms of quality, I get excited for each one that comes over the cinematic horizon. It’s why I have covered every installment of in “Into the Dark” on Hulu and still lament the loss of the often-great “Masters of Horror” on Showtime. So the prospect of a five-director omnibus put together by “MoH” vet Mick Garris that includes installments by the legendary Joe Dante, Ryuhei Kitamura, David Slade, and Alejandro Brugués? Sign me up. And “Nightmare Cinema” starts with a bang, as Brugués drops us into a fun, clever, gory little ride. I was excited for the four installments to follow. I got less and less excited.

The connective tissue in “Nightmare Cinema,” also directed by Garris, is called “The Projectionist” and stars Mickey Rourke as the title character, someone who shows people their darkest fears in an empty old movie palace. Like a lot of “Nightmare Cinema,” this is a great idea that feels half-hearted in its execution. A creepy old projectionist in a rundown theater showing people short films that reflect their anxieties and fears is a legitimately great idea for a wraparound in an anthology series, but it’s completely lacking in atmosphere or dread here, as, well, Garris isn’t very good at either. More on that later.

The first short film is “The Thing in the Woods” by “Juan of the Dead” director Brugués and it’s almost great. Avoiding the build-up structure of most short films, he just drops us into the climax of a crazy horror movie. There’s a woman covered in blood and a weapon-wielding manic known as The Welder. Chaos ensues. And it gets more inspired and insane as it goes along, arguably piling on one lunatic twist too many, but it’s still a heck of a lot of fun, which is a feeling that will dissipate shortly.

Dante’s “Mirare” follows and it’s an intriguing misfire. Like a lot of “Nightmare Cinema” it feels like it was rushed in production, leading to a lot of single takes and shoddy editing decisions. The idea is strong and allows Dante to play with his inspirations like “The Twilight Zone” and the anthology fiction of his youth. Like a cousin of Rod Serling’s “Eye of the Beholder,” “Mirare” features plastic surgery gone very awry. A young woman decides to get a touch-up to make her fiancé happy before the wedding. Things go wrong. The acting here is oddly uninspired beyond the clever casting of Richard Chamberlain as a devious plastic surgeon. Mostly, it lacks that Dante energy that defines his best work.

Energy returns in “Mashit,” from the director of “Midnight Meat Train,” but that’s the nicest thing I can say about it. The stylistic flourishes that once defined Kitamura’s best work (seek out “Versus” if you get the chance) have now dominated so completely that the connective tissue between gory kills in his films has become increasingly intolerable. Just like in his awful “Downrange,” the dialogue scenes are downright incompetently written, directed, and filmed. At least this one has a shocking image or two to jolt it back every now and then, but around here is when I started to question my love of anthology films.

David Slade’s “This Way to Egress” is way more ambitious but still feels like a misfire. It’s the kind of hallucinatory piece that might have worked as an episode of a series—as Garris originally conceived “Nightmare Cinema”—but doesn’t coalesce with the rest of this film. The black-and-white chapter stars Elisabeth Reaser of “The Haunting of Hill House” as a woman who goes to see a doctor as she fears she may be going insane. The demonic faces she sees on people around her are a sign that she is. Reaser is strong but this one feels like a cheap exploitation of mental illness and the non-ending doesn’t work in an anthology film like this one.

All of this leads to the dismal “Dead,” from Garris, a hideous little slice of “I see dead people” horror that simply doesn’t work on any level. A boy and his parents are shot and left for dead. The boy survives, but he was dead for 17 minutes. Guess what he can do now? Poorly made in every single department, “Dead” is as sloppy and inept a piece of filmmaking that I’ve seen this year. It ends this ambitious project on such a bad note.

That’s just the risk you take with anthology TV series or films. For every “The Thing in the Woods,” you risk a “Dead.” It’s a gamble every time, and there’s something charming and fun about rolling the dice on a new project every 20 minutes. That “Nightmare Cinema” fails to pay off as often as it does is a disappointment, but I’m undaunted in my love of the anthology series gamble. I think I always will be. 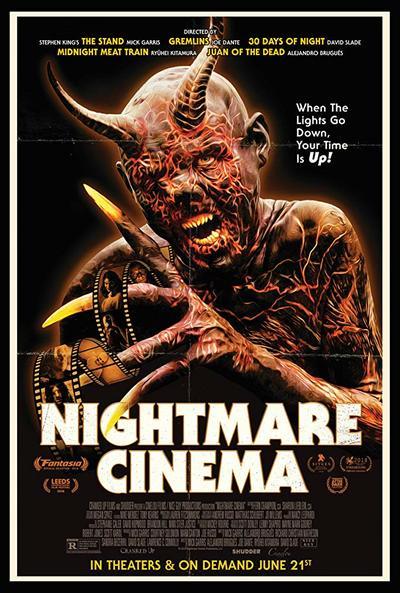 Mickey Rourke as The Projectionist

Eric Nelsen as Fred / The Welder