“Nightlight” is a perfect example of a film with interesting ideas that are totally smothered by poor execution. It is one of Roger’s most timeless critical dictums that it is not what a movie is about but how it is about it that matters. And while watching “Nightlight” I kept thinking about elements of it that I liked but they were almost entirely conceptual. One cannot judge a film by its concept but how the filmmakers execute it, and the filmmaking here ranges from mediocre to remarkably aggravating to downright hideous.

The Covington forest is one of those locations of urban legend for local teenagers. It’s rumored to be haunted by the troubled souls of the surprisingly high number of adolescents who have taken their lives within it over the years, including a classmate of a quintet of teens about to play some games in the middle of the night. Robin (Shelby Young), Nia (Chloe Bridges), Chris (Carter Jenkins), Ben (Mitch Hewer) and Amelia (Taylor Murphy) brave the woods with only their flashlights and the moon to guide them. Directors Scott Beck and Bryan Woods shoot what follows found-footage style from the perspective of the flashlights, only seeing what it can illuminate, which allows for some interesting perspective games but also makes for truly ugly camerawork of the “shaky cam as teens run terrified around a forest” variety. During at least half of “Nightlight” one can barely tell what the hell is even happening, which is by design but also makes for an experience that’s as visually unappealing as anything in years. “The Blair Witch Project” is a natural comparison point, but that movie snuck in some very strong visual compositions to off-set its DIY aesthetic. No such luck here.

Back to the “story.” These five “Breakfast Club” wannabes are in Covington to tell ghost stories and play flashlight games. They fool around on a train track, play Truth or Dare, and eventually get to the titular game, which is essentially a nighttime version of Hide and Seek. Four of them hide while the fifth is blindfolded. He or she then tries to find the rest, only shouting “Nightlight” when the fear of being truly alone in the middle of nowhere becomes too much to bear. Of course, here’s where “Nightlight” reveals at least part of its hand. These poor kids aren’t alone.

The middle act of “Nightlight” hints at what the film could have been and threatens to work as true horror oddity. Without spoiling anything, and I’m not sure I could if I tried, “Nightlight” is a hard film to decipher, very purposefully so. It’s not your traditional Slasher in the Woods piece, nor is it even a standard ghost story by modern film terms. It’s just weird. There are wolves, bats, a couple of the girls get fevers and pass out, trees fall—there are decidedly strange things going on in the Covington woods, but I like that the filmmakers don’t put too much effort into defining or explaining them. It’s no mere haunted forest movie and it starts to take on existential qualities—how long have they been there? Were they ever not there? Are they haunting each other? What the HECK is going on?

That sense of disorientation and confusion in which “Nightlight” looks like it might be about to click into something more engaging doesn’t last because the narrative gets more traditional, but more so because the filmmaking is constantly sabotaging what works. There’s a great piece involving overhead lights that go on and off in just the right timing to reveal You Know What that’s really quite effective, but it has to end with a loud use of score and shaky cam. Someone should remake “Nightlight” without the found footage aesthetic and an actual focus on visual composition (they might want to rewrite some of the fakey teen dialogue too). Then viewers wouldn’t be so turned off by how this movie is about what it’s about. 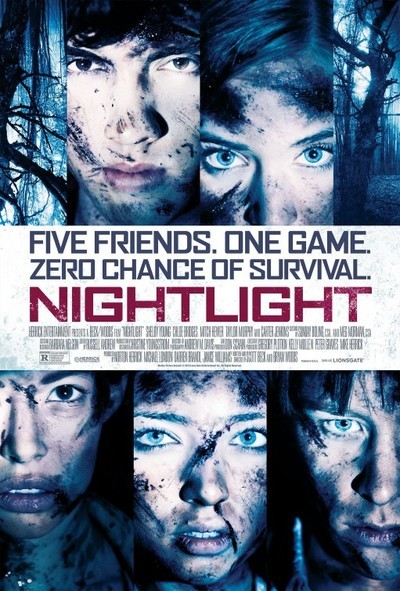