There’s an old-fashioned aesthetic in “News of the World” that might make it easy to dismiss as a “dad movie," something that plays on TNT in regular rotation for the next decade (which it almost certainly will), but this kind of finely-calibrated genre film is harder to pull off than it looks. There’s an attention to detail in every corner of this movie, including not just the period recreation but everything from James Newton Howard’s lovely score to Tom Hanks’ subtle performance. There’s something comforting about giving yourself over to an undeniably talented group of artists for two hours and just letting them tell you a story. That’s what this will be for many this holiday season. Yes, it’s relatively predictable and arguably a little thin in terms of ambition, but it’s also refined and nuanced in ways that these films often aren’t. Everyone here is at the top of their craft from the character actors who populate the ensemble to the two leads at its center to everyone behind the camera, and you can feel that from first frame to last.

Hanks reunites with his “Captain Phillips” director Paul Greengrass to play a very different kind of Captain in Jefferson Kyle Kidd, a traveler in Texas in 1870, not long after the end of the Civil War. Kidd is a newsreader, someone who travels from town to town and literally gets paid to read the news to the locals. Home delivery wasn’t a thing 150 years ago and many people in these small towns couldn’t even read, so they relied on people like Kidd to tell them what’s going on in the world. The chosen profession has made him something of an isolated wanderer, but it's also imbued a deep humanity in Kidd that has given him the air of an old-fashioned storyteller. He’s an entertainer as much as an informer, choosing what to read and how to present it. His travels and encounters also mean he can read people better than most, which will be essential for the next chapter of his life.

That starts when he comes across the scene of a murder. A Black driver has been hanged from a tree and a blonde girl looks at Kidd from the woods nearby. Kidd decides to take the girl he names Johanna (the excellent Helena Zengel) to safety, even though she speaks no English and appears to have spent much of her young life in the captivity of Native Americans. She comes from German lineage but speaks Kiowa, and she was being taken to the authorities after the tribe who raised her was killed. Kidd realizes he will have to find this orphan a home.

These early scenes may be simple in narrative structure but Greengrass, Hanks, and the team behind the film add so much grace and nuance to them. Hanks has become such a subtle actor over the years, finding the little beats to define Kidd at every turn but never feeling showy. He’s so completely in the moment in this film, responding to each situation believably instead of sinking into the bland protagonist that could have hampered this film. It’s yet another recent turn of his that feels like it won’t get enough attention because he makes it look so easy (see also “Captain Phillips,” “Bridge of Spies” and “Sully,” among others).

“News of the World” becomes a road movie of sorts for Kidd and Johanna, with new encounters across the unstable landscape. (After the end of the Civil War, Texas was not exactly the safest place in the country.) Greengrass structures it in an episodic way that kind of detracts from the midsection, where the film sags a bit as it jumps from encounter to encounter. The set-up is so well done that watching the movie settle into a road trip may be a bit disappointing, although Greengrass brings out some of his action movie direction skills when they’re needed, such as in a tense shoot-out with some scumbags who try to buy Johanna. However, there’s a better version of “News of the World” that has slightly higher stakes. As difficult as the journey is, neither Kidd nor Johanna have a bruise or scar to show, even after jumping from a runaway horse and cart.

Greengrass is also smart enough to imbue his 1870 Western with some 2020 ideas. Kidd finds his way to Erath County, where the atmosphere is one of isolation and, sorry, fake news. The most prominent figure in the area, Mr. Farley (Thomas Francis Murphy) insists that Kidd read his propaganda newspaper about pushing out everyone from the area but the white people, and connections to disinformation in the modern age are not hard to make. And the idea of a man trying to bring a fractured nation back together through knowledge and decency has some relevance in 2020 too.

Not all of these themes are fully fleshed out, but “News of the World” stays together and stays entertaining because of its top-notch craft. It may feel like Greengrass’ most traditional film but there’s an energy to the direction here that’s not always apparent in a Western. It helps that it’s arguably the director’s most aesthetically striking film, with gorgeous vistas captured by Darius Wolski and one of the best scores of the year from James Newton Howard. And it’s so great to see so many wonderful faces filling out the cast like Ray McKinnon, Elizabeth Marvel, and Bill Camp. On paper, this simple tale well-told may not seem like it amounts to much, but, at the end of a year in which comfort was hard to find, this movie sometimes feels like a gift.

In theaters on Christmas Day. 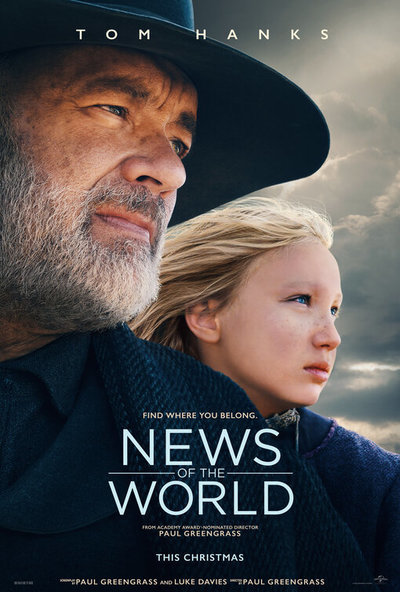