If there's one quality that middle-class Americans have in common, it's a tendency to be rigidly polite in the face of absolutely unacceptable behavior. Confronted with obnoxious rudeness, we freeze up, we get a nervous little smile, we allow our eyes to focus on the middle distance, and we cannot believe this is happening to us. It's part of our desire to avoid a scene. We'd rather choke to death in a restaurant than break a plate to attract attention. “Neighbors” is about one such man, Earl Keese (John Belushi). He is a pleasant, low-key dumpling of a fellow. He lives an uneventful life with an uneventful wife (Kathryn Walker). Then the neighbors move in, and there goes the neighborhood. They are everything we dread in neighbors. They are loud. They are blatant freeloaders. The man (Dan Aykroyd) is gung-ho macho. The woman (Cathy Moriarty, from “Raging Bull”) is oversexed and underloved. They park some kind of customized truck on their front lawn. They invite themselves to dinner.

There are compensations. For example, the woman seems to be a nymphomaniac. That would be more of a compensation for Earl if he were not terrified of aggressive women. Earl has not the slightest notion of how to deal with these next-door maniacs, and his wife's no help: She puts on her best smile and tries to handle the situation as if everyone were playing by Emily Post's rules. The story of the Keeses and their weird neighbors was first told in Thomas Berger's novel. It was obviously a launching pad for a movie, but what sort of movie? The relationships among these neighbors depend almost entirely on the chemistry of casting: For example, obnoxious Richard Benjamin could have moved in next to meek Donald Sutherland.

In "Neighbors," however, we get Belushi and Aykroyd. I think it was brilliant casting, especially since they divided the roles somewhat against our expectations. Belushi, the most animalistic animal in “Animal House,” plays the mild-mannered Keese. And Aykroyd, who often plays straight-arrows, makes the new neighbor into a loud neo-fascist with a back slap that can kill.

The movie slides easily from its opening slices of life into a surburban nightmare. We know things are strange right at the start, when Aykroyd extorts money from Belushi to get a carry-out Italian dinner, and then secretly cooks the spaghetti right in his own kitchen. Belushi sneaks out into the night to spy on Aykroyd and catches him faking it with Ragu, but is too intimidated to say anything. The whole movie goes like that, with Belushi so intimidated that he hardly protests even when he finds himself sinking into quicksand.

Meanwhile, the women are making their own strange arrangements, especially after the Keese's college-age daughter (Lauren-Marie Taylor) comes home from school and begins attracting Moriarty's attention. The movie operates as a satire of social expectations, using polite clichés as counterpoint to deadly insults (all delivered in pleasant conversational tones).

The first hour of “Neighbors” is probably more fun than the second, if only because the plot developments come as a series of surprises. After a while, the bizarre logic of the movie becomes more predictable. But “Neighbors” is a truly interesting comedy, an offbeat experiment in hallucinatory black humor. It grows on you. 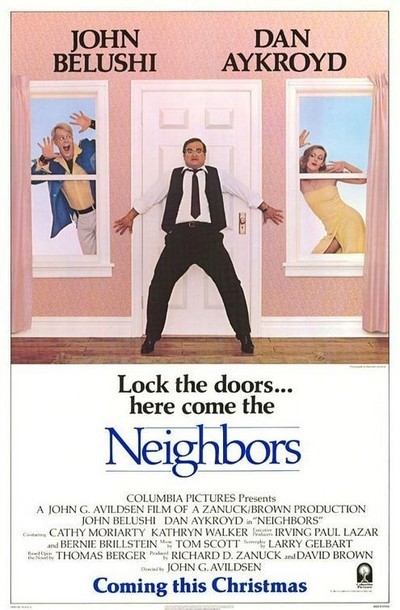