Natalie Wood: What Remains Behind

The horrifying death of movie star Natalie Wood has overshadowed her life. "Natalie Wood: What Remains Behind," a film by longtime documentarian and behind-the-scenes DVD featurette director Laurent Bouzereau, tries to correct that, by focusing on the actress' film career and her experiences as a mother, a wife, and the daughter of Russian immigrants. But the mystery of her demise looms over this reclamation project like low-hanging storm clouds, and the film suffers from its decision to avoid looking up unless it has to.

There are some good bits covering Wood's work in "Rebel Without a Cause," "Splendor in the Grass," "West Side Story," "Miracle on 34th Street," "Love with a Proper Stranger," "Inside Daisy Clover" and other classics, and the film is at its strongest when it's detailing her struggle to succeed in a male-dominated industry that sexually exploits and discriminates against women. Actress Natasha Gregson Wagner, daughter of Natalie Wood and British film producer Richard Gregson, serves as audience surrogate and "host." In addition to sitting for on-camera interviews, Gregson Wagner addresses the camera directly and is often seen in the same frame with interview subjects sitting across a table, as if sharing a casual lunch. The interviewees include Mia Farrow, Robert Redford, Richard Benjamin, and of course Gregson Wagner's stepfather Robert Wagner, whom Wood married, divorced and remarried, and who was on the boat that night and has been the object of suspicion since.

But despite its intention to redirect public attention to the actress's life and art, the film ultimately starts to seem as anxious and evasive as a witness in a murder investigation who talks around the subject that questioners are most interested in.

This is not to say that "What Remains Behind" is without value, much less that this reviewer subscribes to the more tawdry or sinister theories about how Wood died. All we know for sure is that she disappeared from a yacht near Catalina Island, where she'd anchored Wagner, Christopher Walken, her costar in her last film "Brainstorm," and other passengers, and that the Coast Guard found her corpse hours later. The simplest explanation for what happened is that Wood, who was staying in a cabin below deck with Wagner, got up at the end of a rainy night to tighten the rope on a dinghy that had been banging against the hull and disturbing her sleep (something family members said was a source of irritation for Wood whenever they sailed), then slipped on the wet deck, fell overboard, and drowned.

Nevertheless, Wood fans, Hollywood conspiracy theorists, and some representatives of law enforcement have embraced other explanations—and not just because Wood was said to have a fear of "dark water," broke her wrist as a child actress while filming a flood scene in a studio water tank, and played some of her most iconic scenes in swimming pools, rivers, and bathtubs. (Gregson Wagner and other witnesses discount the "dark water" legend, noting that her mom loved swimming in the family pool, and that pretty much everyone fears dark water.) Theories abound that Wagner killed Wood, either with malicious intent or as the result of a drunken argument that caused her to fall overboard. These theories were amplified by rumors that either Wood had been having an affair with Walken on set, or that Walken and Wagner were having an affair off-camera, and that one spouse confronted the other and things spiraled out of control.

Walken, who declined to participate in "What Remains Behind," doesn't get to address infidelity within the context of the narrative, except by way of an old "Entertainment Tonight" clip where he refuses to speculate on what happened and expresses irritation that people won't stop spinning theories. Douglas Trumbull, the director of "Brainstorm," says Walken and Wood displayed zero physical chemistry in their sex scene, and this is presented as conclusive proof that nothing was happening between them off-camera. But actors who have the hots for each other offscreen can be sexless onscreen and actors who hate each other's guts can strike onscreen sparks, so this proves or disproves nothing. And Trumbull's take doesn't even touch on the Wagner + Walken theory. Wagner says on camera that in the weeks leading up to Wood's death, Walken had been admonishing Wood to concentrate on her career rather than her domestic life, and that Wagner repeatedly blew up at Walken on the yacht that night because he thought Walken had overstepped his bounds. But the film stops short of connecting any of this to Wood's final moments. Wagner says only that Wood went up on deck when he wasn't around, then vanished. There's little speculation by Wagner on what he thinks transpired.

In 2011, Los Angeles police reopened the investigation into Wood's death, changed the cause on her death certificate from "drowning" to "drowning and other undetermined factors," and named Wagner as a "person of interest"—though not a "suspect," an important distinction. There have been further charges that police quashed a more thorough investigation because Wood and Wagner were major figures in the film industry and there was pressure to let the family grieve and move on. Dennis Davern, the yacht's captain, has speculated in a book and a podcast that Wagner pushed Wood overboard; Davern also said he had initially lied to police about what happened, and has accused Wagner of locking him in his cabin that night to prevent him from notifying authorities that Wood had disappeared. Wood's younger sister Lana Wood published a book insisting that Robert Wagner caused the tragedy, and claimed that Wagner is a closeted bisexual and that his 1961 divorce from Wood was sparked by Wood catching him with another man.

I can imagine Bouzereau and Gregson Wagner, a coproducer on the film, getting to this point in the review and growing angry or sad that it downplays the film's dazzling array of never-before-seen documents, photos, and home movies, as well as all the finely observed details about Wagner's life and work, including her relationships with Wagner, her emotionally unstable mother Maria, and her "Splendor in the Grass" costar Warren Beatty (which some have speculated was the cause of Wood's divorce from Wagner), and the way she took command of her career with a vigor was unusual for young actresses back then. (Wood even publicly battled her boss, Warner Bros. head Jack Warner, to get more control over her choice of film projects, and succeeded.)

But "What Remains Behind" is structured and told in such a frustrating, often counterproductive manner that it feels like an official product of the Wood-Wagner family. It confines the renewed controversy over Wood's death to the final twenty minutes and confines its interviews to Wood and Wagner's trusted inner circle, which includes two of Wood's publicists and Wagner's second wife Jill St. John. Wagner is repeatedly addressed on camera by Gregson Wagner as "Daddy," and referred to by other family members and in Gregson Wagner's narration as "Daddy Wagner."  The non-presence on camera of Walken, Davern, Lana Wood, and others who might dispute the movie's take on the tragedy doesn't enhance the movie's aura of trustworthiness. Nor does its strident railing at the tabloid media—an industry that is often sleazy but not always factually wrong. And when the movie depicts Lana Wood as a parasite who leeched off her big sister's stardom while showing no interest in the rest of the Wood-Wagner family, it feels like an attempt to discredit the messenger instead of the message.

And how curious and unfortunate it is that Robert Wagner turns out to be his own worst advocate. When he offers his version of what happened that night, his lingering pain over Wood's death is undeniable. But the way he coughs sharply before launching into the story of what happened on the yacht, then makes less frequent eye contact with his stepdaughter throughout the next section of their conversation, comes across as a profound shift in demeanor—one that neither Wagner's interviewer nor Bouzereau appear to have noticed. Wagner's admission that he grew so furious with Walken that night that he smashed a wine bottle against a table hints at an uncontrollable and potentially lethal rage, surely not the impression he meant to leave viewers with. The film hops right over this part of his personality, like barefoot passenger avoiding broken glass.

Taken together with other documentaries and written biographies, "Natalie Wood: What Remains Behind" could serve as a compelling piece of a larger puzzle. But its many curious and self-defeating choices ensure that it ends up feeling like a defense brief for a trial that will never occur in court, but that's been going on in the public eye for four decades and will probably never end. 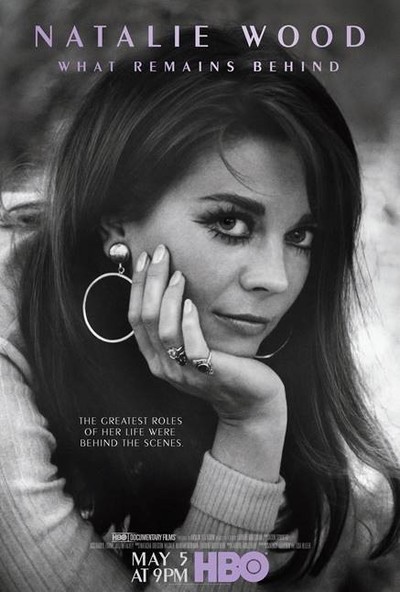 Natalie Wood: What Remains Behind (2020)

Natalie Wood as Herself (archive footage)

Natasha Gregson Wagner as Herself

Robert Wagner as Himself

Katie Wagner as Herself

Richard Benjamin as Himself

Dyan Cannon as Herself

Michael Childers as Himself

Tonya Crowe as Herself

Mart Crowley as Himself

Dennis Davern as Himself (archive footage)

Joshua Donen as Himself

Mia Farrow as Herself

Richard Gregson as Himself

George Hamilton as Himself

Peter Hyams as Himself

John Irvin as Himself

David Niven Jr as Himself

Robert Redford as Himself

George Segal as Himself

Jill St. John as Herself

Douglas Trumbull as Himself