"Nasty Baby" introduces us to a trio of sympathetic characters. We come to understand their motives, hopes and fears, find ourselves rooting for them to overcome those doubts in order to achieve those dreams, and grow to really like them. Then, that happens.

The "that" is a third-act move that is sure to be divisive. One could see it as a twisted-knife culmination of the motivations and less-than-admirable qualities of these characters, or one could see it as a betrayal of the audience's trust. It's both, really, and above whatever desire one might have to qualify the film's climax as either a logical conclusion or an act of cheating, it is a daring, radical shift in tone and intention that genuinely shocks.

Writer/director Sebastián Silva doesn't cheat in terms of storytelling, though. Throughout the film, he sets up these characters, and us, for what happens. We suspect something could go wrong, but Silva distracts us with the sweet, charming story of three people trying to find happiness under tough circumstances.

Since we want these characters to be happy, Silva essentially makes us accomplices to what unfolds late in the film, because, even under the specific conditions of the climax, happiness is the ultimate goal. That's especially true when it is so, so close to being achieved, and that's the point at which Silva forces these characters to decide, once and for all, which way it's going to go. In the process, he challenges us to say with certainty that we would behave any better under similar circumstances and with that much at stake. One can hope.

The stakes that become so vital in the third act are just romantic concepts for these characters at the start, and they treat them with uncertainty. Freddy (Silva, whose appearance as one of the central characters further convinces us of the film's claim to be "based on a true story"—up to a point, of course) and his boyfriend Mo (Tunde Adebimpe) live together in a New York City apartment. They have decided to become parents. Freddy's best friend Polly (Kristen Wiig), who also wants to have a baby, will be the surrogate mother and have a role in raising the child.

Freddy is an artist. He's currently preparing a video piece, featuring him acting like a baby, in order to assuage his guilt over what he sees as a selfish act—wanting a child of his own when there are so many children who could be adopted. Still, he desperately wants to be a father, and late in the night, he stares at his phone, looking at photos of himself as a child and imagining what his own child might look like. If Freddy's desire to have a child is selfish, then surely his desire to publicize his guilt is a form of self-indulgence. There's no avoiding that this emotional entitlement plays a significant role in what comes to pass.

Freddy has a low sperm count, though, so he must convince Mo to donate his own sperm. Mo is hesitant, and it seems like a lost cause. Meanwhile, a new resident on the block, who calls himself "The Bishop" (Reg E. Cathey), has been making life miserable with his habit of using a leaf-blower in the early morning hours, as well as some other, less innocent behavior.

Silva's screenplay has a slice-of-life feel; Sergio Armstrong's cinematography provides the natural lighting and handheld camerawork that adds to that sensation. Not much happens here in terms of actual plot points, but these day-to-day observations of the trio's activities give us a good feeling for these characters and their slowly solidifying relationship.

Part of Mo's hesitation is that he still considers Polly to be Freddy's friend—not so much his. There's a natural rapport between the old friends, and Mo's shift toward seeing Polly in a different way begins with a passing observation—Mo watches the kindness with which Polly treats a physically abused woman who comes into the clinic where Polly works.

Mo is a calming agent for Freddy, who has anger management problems, and Adebimpe's performance has a similar effect upon the film. He's a sturdy presence, balancing Polly's continual disappointment at the failure to conceive and Freddy's frustrated indecisiveness. Wiig and Silva are solid, too, as both actors convey a genuine sense of longing for a dream that is constantly deferred.

The culmination of the threesome's new normal arrives in a surprisingly tender scene that immediately follows a tense dinner with Mo's family—some of whom still have some qualms about Mo's life. This delicate scene portrays what is essentially a medical procedure, but Silva imbues it with a sense of intimacy through simple framing (Polly's face shares half of the frame in the foreground, as Freddy and Mo do their part for the procedure in the other half). The actors play it without a trace of discomfort.

It's worth noting, by the way, that the character who eases the tension in the earlier scene at the dinner table is the one we least suspect. Details such as that one are key to the impact of the film's climax. Silva repeatedly sets up some kind of barrier or stumbling block for these characters, only to resolve it with humor (Freddy's failure at an art gallery results in a moment of utter absurdity) or an optimistic view of humanity.

The method is so effective that we expect a similar result once those climactic events begin. Surely there will be some out for these characters. Surely it won't go as far as we fear. Surely goodness will prevail somehow. Surely happiness shouldn't come at such a cost. Whether we like it or not, "Nasty Baby" is defiant in how it doesn't sway from these ultimate acts of selfishness. 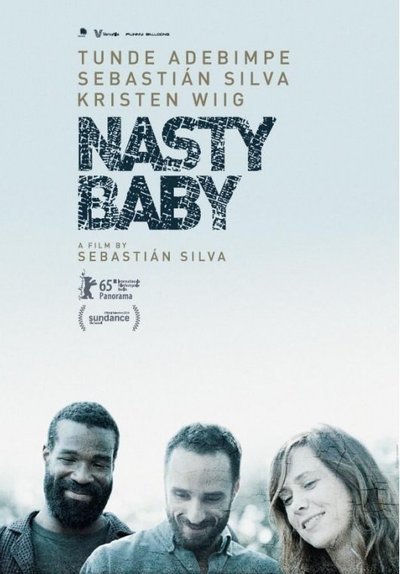 Reg E. Cathey as The Bishop